If it feels like we’re on day 75 of January (seriously, though, who can relate?), you’ll be pumped that Applebee’s next Drink of the Month will be bringing some much-needed New Orleans flavor into your life. Applebee’s Dollar Hurricane for February 2019 is here through Mardi Gras, and yes, that means you can count down to the March 5 by getting lit for only $1 at your local Applebee’s. If booking a flight to the Big Easy isn’t in the cards right now, you’ll want to take advantage of the next best thing with these festive cocktails that’ll get you buzzed on the cheap.

Per press materials sent to Elite Daily, Applebee’s is getting the party started all month long with its newest drink, which is appropriately fashioned after what might be New Orlean’s most iconic Mardi Gras libation. When Mardi Gras comes around on March 5, Applebee’s customers will have had over a full month to get into the ~spirit~ of things, thanks to a new Dollar Hurricane that’s all about tropical flavors. According to a press release, you’re getting a full 10-ounces of boozy goodness for just $1, and each red-hued drink includes a "delicious fusion of rum, passion fruit, orange, black cherry, and lime." Considering that the sip comes with either a masked stirrer or decorative beads, it’s basically like a night out in New Orleans, and TBH, it’s definitely everything you need to get the party started, no visit to the French Quarter required.

I’m pretty excited that the Dollar Hurricanes are replacing January’s Drink of the Month, the $2 Captain and Cola. Not only are the Dollar Hurricanes one buck cheaper than their predecessor, but the mixologists at Applebee’s also have proven time and time again that they know their way around creating island-inspired cocktails. Case in point: the shark gummy-topped Shark Bowl (basically a giant blue slushy filled with Captain Morgan rum), which the retailer first started serving on Jan. 10 as an antidote to the January blues. While the tropical cocktail was released on a limited-time basis, customers on Twitter appeared to be getting on the sips as recently as Jan. 26.

Nothing warms you up and lifts your spirits quite like a happy hour that tastes like a vacation and costs you less than a coffee at Starbucks, so it’s a win-win situation that everyone can get on board with. 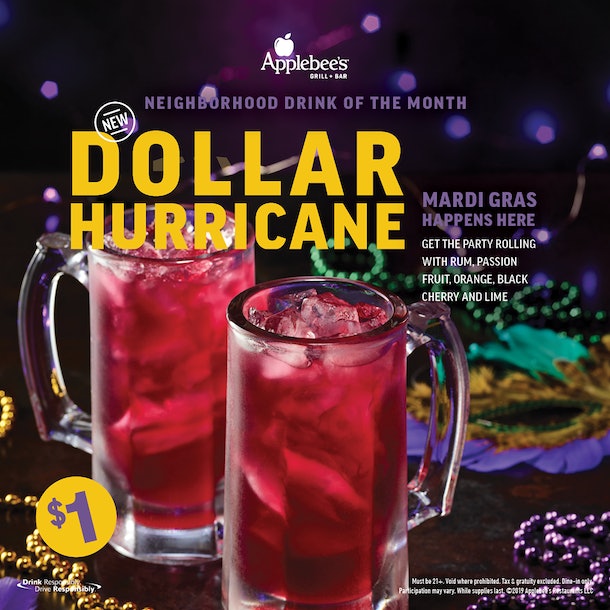 Just one words of caution: Even if your drink is only $1, those hangovers are still very real and may be especially rough if you had a dry January, so Applebee’s reminds patrons to imbibe all of their cocktails with caution. After all, no one wants to be this person:

Again, there are only a few days to go until you can call it quits with January, so I’d clear your Friday schedule, Slack your co-workers or your crew about happy hour, and plan to spend the beginning of February treating your tastebuds to the flavors of New Orleans. Cheers!