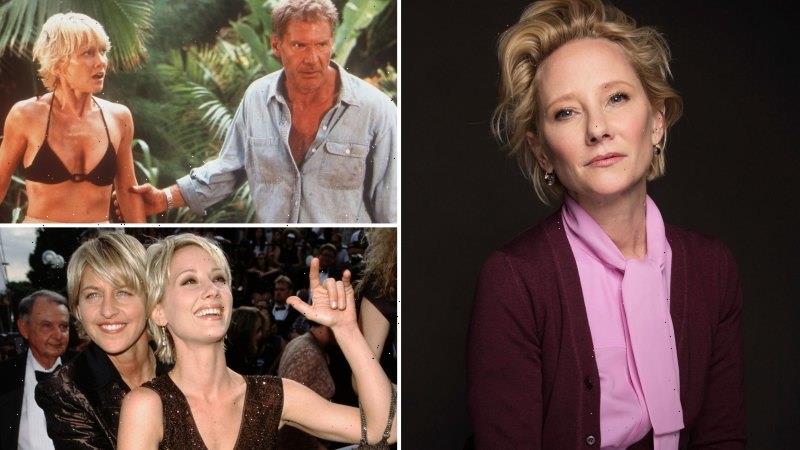 Anne Heche, the actor who died aged 53 on Saturday after a car crash in LA, rose to Hollywood fame in the 1990s in such films as Donnie Brasco, Volcano, I Know What You Did Last Summer and Wag the Dog, but it was as half of Hollywood’s most famous same-sex couple, with Ellen DeGeneres, that she became a household name.

Their relationship, which began in 1997, filled the tabloids, but the couple’s frankness caused a storm and stalled Heche’s Hollywood career. Worse followed in 2000 after they split up, when a dishevelled and delusional Heche knocked on the door of a stranger’s home in Fresno, California, declared herself to be God and offered to take everyone to heaven in her spaceship. 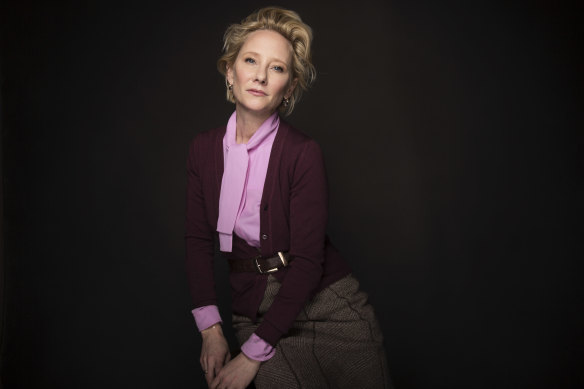 Anne Heche, pictured in 2017, was a talented actress whose work was overshadowed by her personal life.Credit:AP

The press had a field day and Heche suffered a psychotic breakdown. Yet in the years that followed she rebuilt her career – not with the big Hollywood studios, but in television roles and independent films.

Her demons were never far behind, however. They had their origins (as revealed in her autobiography Call Me Crazy) in a nightmarish childhood in Ohio.

Heche claimed that as a child she had been repeatedly raped by her father, a church organist and unsuccessful entrepreneur, once contracting genital herpes as a result (her mother, she claimed, dismissed it as nappy rash). “I had a fantasy world that I escaped to,” she recalled in 2001. “I called my other personality Celestia. I believed I was from that world. I believed I was from another planet.”

In 1983 her father died of AIDS, shortly after revealing to his family that he was homosexual. Three months later, Heche’s 18-year-old brother Nathan died in a car accident that she believed was suicide.

Heche found in acting “a life and a joy that was not in my family”, and after high school in 1987 she landed a job on the long-running soap Another World, bagging a Daytime Emmy for outstanding younger actress.

In 1993 she moved to Hollywood, where she established herself as a hot property with a succession of outstanding supporting performances in films such as the cult romantic comedy Walking and Talking (1996) and Donnie Brasco (1997), in which she co-starred opposite Al Pacino and Johnny Depp as Depp’s long-suffering wife. She was an elegant presidential aide in the critically acclaimed Wag the Dog (1997) with Robert De Niro and Dustin Hoffman, and a vulcanologist in the disaster movie Volcano (1997) with Tommy Lee Jones. 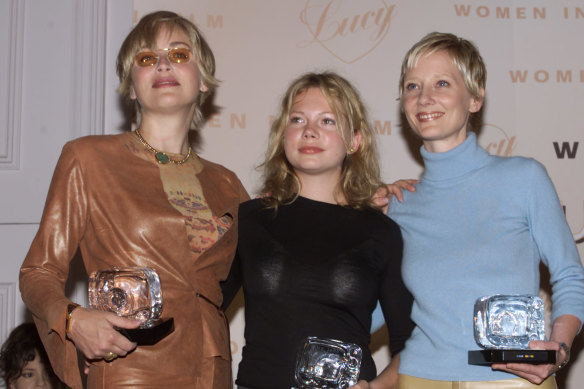 Heche, right with Sharon Stone and Michelle Williams at the Women in Film Lucy Awards in 2000. The actors were honoured for their work in film If These Walls Could Talk.Credit:Reuters

She also took numerous roles on television but until DeGeneres appeared on the scene, Heche was best known for her relationship with the comic actor Steve Martin.

She met Ellen DeGeneres at Variety ‘s Oscars party in 1997, a few weeks before DeGeneres’ character in the sitcom Ellen came out as gay at the same time as the actress herself. Rejecting advice to conceal their relationship, the couple arrived hand-in-hand at the premiere of Volcano and declared their love on The Oprah Winfrey Show.

Heche claimed that as a consequence of their relationship the big studios stopped casting her: “I didn’t do a studio picture for 10 years. I was fired from a $10 million picture deal and did not see the light of day in a studio picture.” 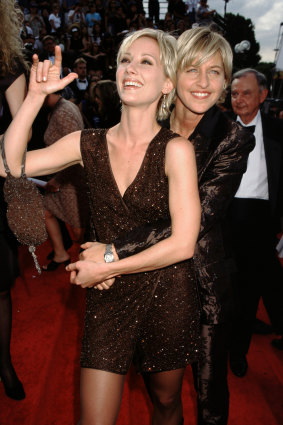 At the time she “came out”, she had been booked to co-star with Harrison Ford in the romantic comedy Six Days, Seven Nights. Fox, she claimed, had tried to back out of the deal, but Ford came to the rescue: “He said, ‘Frankly my dear, I don’t give a damn who you’re sleeping with, we have a romantic comedy to make.’”

The film did badly at the box office, though whether that was because of poor reviews or audience reluctance to buy Heche in a straight relationship is unclear. (A poll at the time found that 68 per cent of cinemagoers said her casting had adversely affected their desire to see the film.)

Heche was cast in a second starring role in 1998 as Vince Vaughn’s love interest in the drama Return to Paradise, and played Norman Bates’ victim Marion Crane in Gus Van Sant’s remake of Psycho the same year. But certainly her Hollywood career had suffered a setback.

Even with her star on the wane, though, Heche carried on giving powerful performances in television films and drama series, among them Hung, Men in Trees and Save Me, as well as playing someone living with Tourette’s syndrome on Ally McBeal. In 2004 her depiction of a drug-addicted mother in the TV movie Gracie’s Choice won her a nomination for another Emmy, and the same year she brought an enigmatic quality to a supporting role in Jonathan Glazer’s film Birth, which the critic David Thomson hailed as a misunderstood work of greatness.

She never found stability in her personal life, however. In 2001 she married the cameraman Coleman Laffoon. They had a son, but the marriage ended in an expensive divorce in 2009 after she fell for her Men in Trees co-star James Tupper. 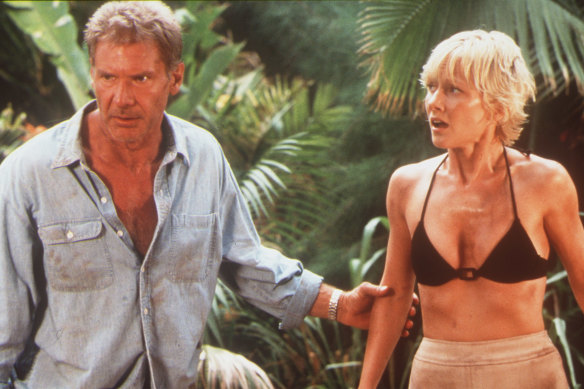 She had another son with Tupper, but that relationship ended in 2017. A subsequent relationship with Thomas Jane, with whom she had co-starred as an acrimoniously divorced couple in the 2009-11 HBO series Hung, was reported to have ended in 2020.

Nor did relationships with her family improve significantly. In 1994 Heche telephoned her mother to confront her about the abuse she said she had suffered from her father. Her mother responded by saying: “Jesus loves you, Anne” and hanging up. After that, they rarely spoke.

Of the surviving three Heche siblings, Anne’s sister Susan Bergman, author of a memoir of her family’s struggle to cope with the death of her father and to come to terms with the revelation that he had been secretly gay, died of brain cancer in 2006.

She was reconciled with her remaining sister Abigail, a jewellery designer, who said in an interview that she believed her sister, in claiming she had been abused by their father, was suffering from false memories.

Heche is survived by her two sons.