Q&A capped off its final episode for the year with a skit from the 2018 Wharf Revue. Four old caucasian men dressed as Liberal politician Mathias Cormann, sang to the tune of The Book of Mormon’s opening number Hello, but with lyrics changed to address events in the Australian Senate.

The response on Twitter, that reliable source of unthinking outrage, was an allegation that the sketch was “racist” because it mocked Cormann’s Belgian accent. Some Twitter users have even called it the “equivalent of blackface”. It’s not. 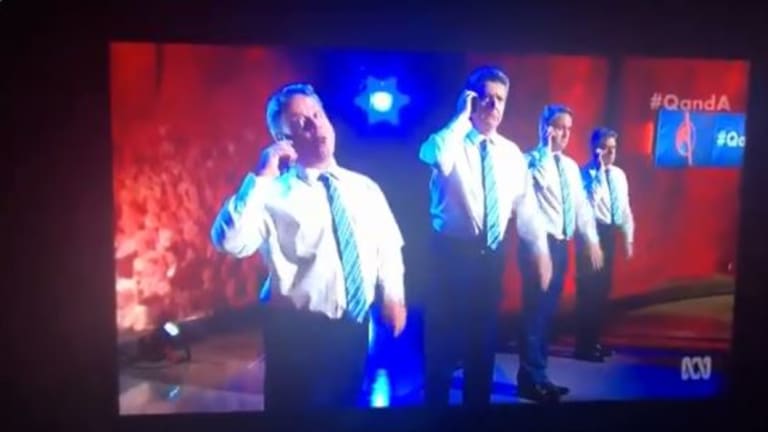 A skit at the end of the end of Q&A stirred up some outrage.
Credit:ABC

Is doing a foreign accent bad? In comedy, you have to punch up, and target people in positions of power. If you punch down and target minorities below your station – that’s just discrimination. Basically, if the target is a cultural minority or a person of lower socioeconomic status – don’t do an accent.

However, when it comes to Mathias Cormann – he’s in a privileged position. According to a 2016 article, he makes over $336,599 a year as a cabinet minister, not including parliamentary privileges. His decision to remove his support from Malcolm Turnbull’s leadership was a turning point the spill. He is the Finance Minister, which means he is in charge of Australia’s money. You don’t get much more powerful than that.

He is the perfect target for satire if it’s done well. By all means, make him one. Unfortunately, this sketch was terribly written. I’ve watched the Wharf Revue skit multiple times and the entire premise seems to be predicated on the fact that Cormann sounds mildly like Arnold Schwarzenegger in The Terminator. There are vague allusions to the government’s internal issues but it is not nearly biting enough to make any real satirical points. Overall, this sketch flopped harder than Peter Dutton’s attempt to become Prime Minister. But is it racist? No.

Nina Oyama is a Sydney comedian.