AMANDA PLATELL: Police close the Stephen Lawrence murder case, but I pray this isn’t the end

Had he not been stabbed to death by racist thugs at a bus stop on April 22, 1993, Stephen Lawrence would now be 45 years old.

This talented teenager would probably have kids and a career. He might have been an architect: aged 18, that was his dream.

How heartbreaking, then, that after 27 years, the Metropolitan Police this week broke the news to Stephen’s parents, Doreen and Neville, that the investigation into his murder has become ‘inactive’, sputtering to a halt even though only two of the five or six-strong gang that killed him are in prison.

Neither Doreen — now Baroness Lawrence after her tireless work fighting racism — nor Neville will ever give up hope that all their son’s killers will face justice. 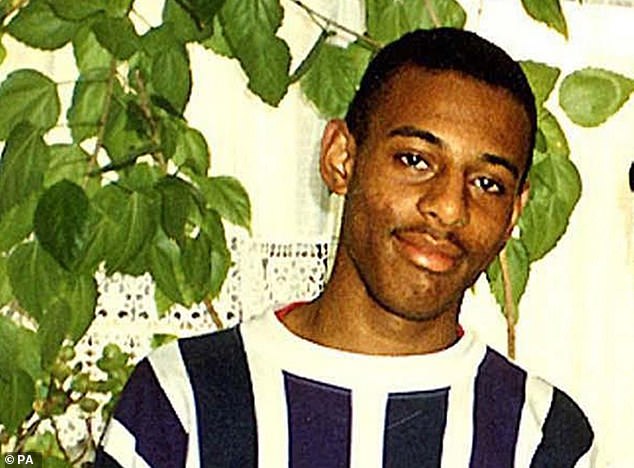 Had he not been stabbed to death by racist thugs at a bus stop on April 22, 1993, Stephen Lawrence would now be 45 years old

And yet despite the devastating news, Stephen’s brutal murder has had a far-reaching legacy. The bungled police operation that followed will never be repeated.

It was a shameful episode in British life — that these thugs could murder without conscience or consequence. Two, it’s true, were finally sent to prison in 2012 after a truly courageous campaign by this newspaper.

Stephen’s death made us all look long and hard into our own hearts.

How could a young man who embodied the best of being British be stabbed to death on our streets and his killers roam free? But there was another, sadder legacy.

As Neville told the Mail’s David Jones this week in a heartbreaking interview, from the moment their son died, he never again touched his wife, nor did she wish to touch him. 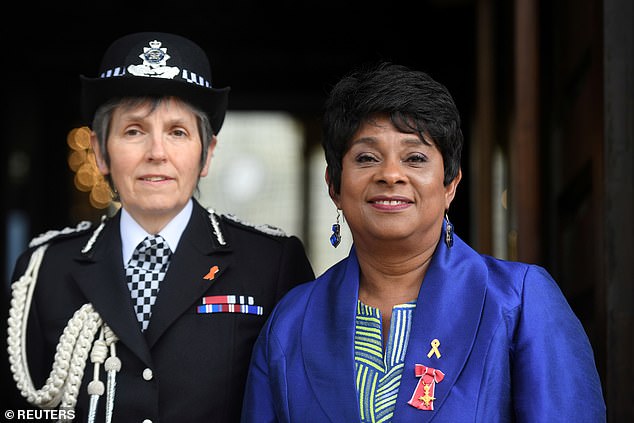 How heartbreaking, then, that after 27 years, the Metropolitan Police this week broke the news to Stephen’s parents, Doreen (pictured, with Dame Cressida Dick) and Neville, that the investigation into his murder has become ‘inactive’ 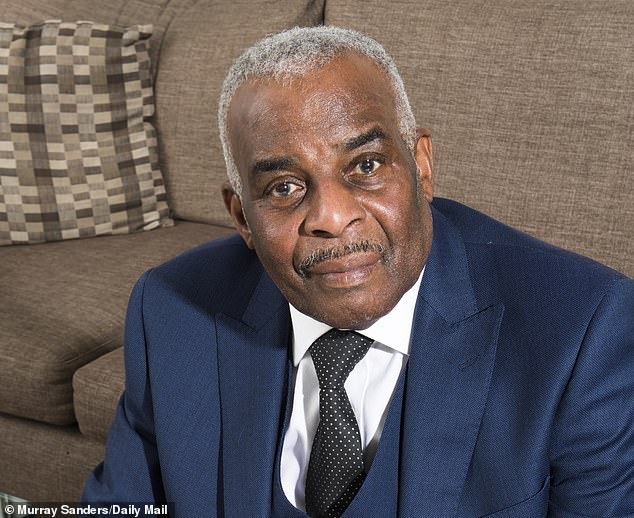 As Neville told the Mail’s David Jones this week in a heartbreaking interview, from the moment their son died, he never again touched his wife, nor did she wish to touch him

Their marriage and their family died that night, too.

It is sadly not uncommon in the circumstances.

Ralph and Denise Bulger also separated not long after the appalling murder of their two-year-old son, James, in 1993.

Nor could Sara and Michael Payne face the future together after their daughter, Sarah, eight, was abducted and killed seven years later.

So much suffering, so much injustice. The failure to bring all of Stephen’s killers to justice remains a terrible stain on this nation’s conscience. I pray that this gentle, kind lad, who cared more for others than himself, is at rest, just as I pray that his parents find peace.

Yet, whatever the Metropolitan Police says, and however much it parades its new inclusive diversity, it should not give up.

The case may be closed, but I hope this is not the end of the story.

Boris Johnson reveals his four-month-old son, Wilfred, takes after him and is now ‘starting to verbalise and make noises’.

Sorry Taylor, you ain’t no Wordsworth

Wacky American songstress Taylor Swift, below, all loved-up with current British boyfriend, actor Joe Alwyn, pays tribute to her Anglophilia on her new album in a song entitled The Lakes, where Wordsworth wandered lonely as a cloud.

‘Take me to the Lakes, where all the poets went to die,’ she warbles, adding: ‘Those Windermere peaks look like a perfect place to cry.’

Honey, I’m afraid it’s your dreadful lyrics that make me want to weep. 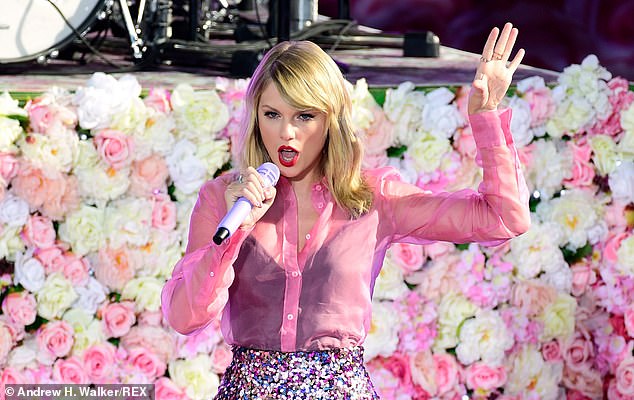 As he volunteers for an experimental coronavirus vaccine, music impresario Andrew Lloyd Webber says he’ll do anything to get theatres open again.

Jolly good, but I’d happily take a jab that would give me immunity from having to sit through any of his stinkers like Starlight Express again.

Dance is better as a baddie

Having always had a crush on Charles Dance, and even dated him briefly, I’m thrilled to see his return in ITV’s upcoming period drama The Singapore Grip, based on J.G. Farrell’s satirical 1978 novel.

Love ya, Charlie, but I think your career might have peaked when you were the baddie in the last Godzilla movie.

Can the political career of Education Secretary Gavin Williamson be long for this world?

The Government’s very own Private Pike has lurched from one crisis to another, and had a torrid week presiding over the A-level results fiasco. Surely this dunce is facing expulsion.

As the economy collapses, the PM poses for a series of photo-ops in hard hat and hi-viz jacket, shooting arrows, laying bricks and spray-painting a wall.

Just when we need a Churchillian leader in the biggest crisis of our lives, Boris can’t resist clowning around.

Rishi Sunak’s Eat Out To Help Out has increased trade in pubs by a third in just a week.

It’s been a sacrifice, but I’m proud to say I’ve done my bit, eating at my local, the Duke of Hamilton, three times this week. Bottoms up!

Black Labour MP Dawn Butler was stopped in a car by police, and says that proves the Met is ‘institutionally racist’. She posted film of it online to enrage the Twitter mob.

The scrupulously polite officers made an innocent mistake and now the force complains of ‘trial by social media’. Butler once claimed a whirlpool bath on Parliamentary expenses. It seems her sense of injustice should go down the plughole, too.

Great to see mum-of-four Coleen Rooney frolicking with her kids in the sea in Barbados wearing an array of designer bikinis.

Mrs Wayne may have the thighs of a rugby prop, but all credit to her for empowering women of every shape and size. She looks magnificent!

And shame on fashion giant Littlewoods for axing her in favour of that skinny Minnie Myleene Klass. 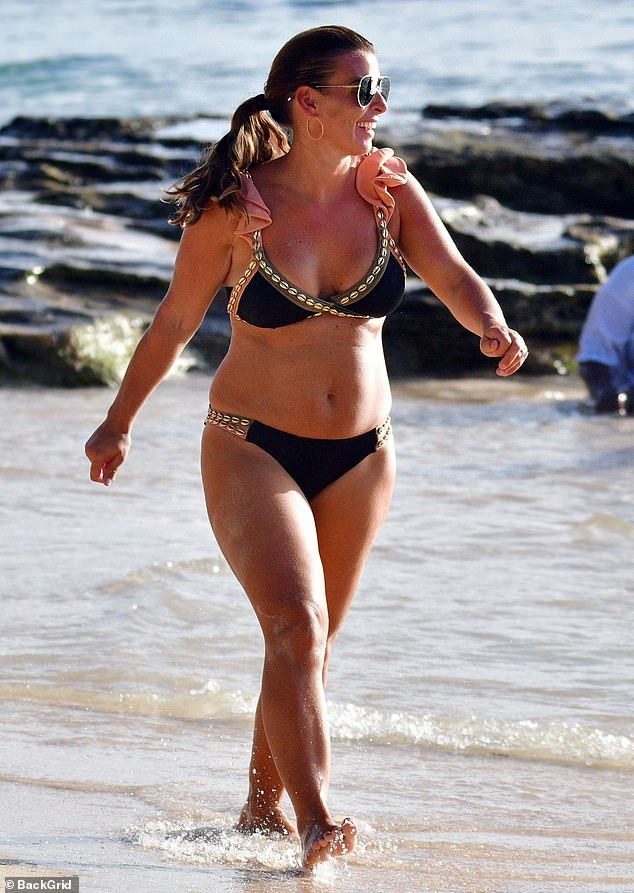 Comedian Ricky Gervais has teamed up with a beer brand and the All Dogs Matter charity to save stray mutts. Cans of Brewdog Street Dog IPA will now come covered in pictures of pooches needing a home.

Watch out, Ricky! It’s only going to be a matter of time before you’re accused of misappropriating the Black Lives Matter campaign, even though All Dogs Matter was launched four years before BLM. Better take a knee.

While Covid-19 ravages his country amid fears of a second wave of infections, and Brits flee to face quarantine back home, I loved the pictures of a muscular and virile French President Poseur Macron on a Jet Ski on the Cote d’Azur.

A passable impression of a Poundland Vladimir Putin. 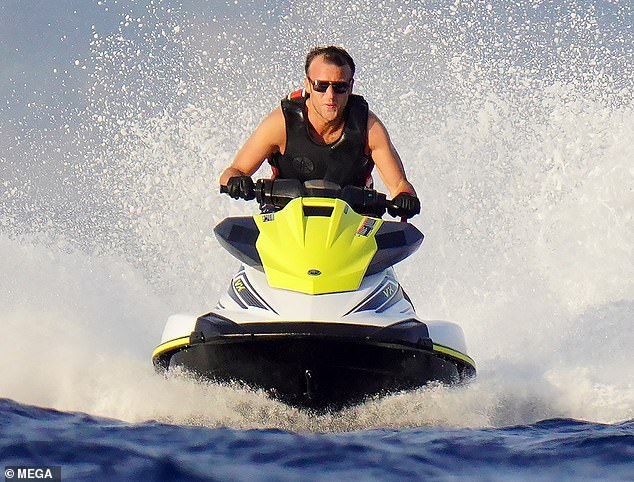 How noble of Gary Lineker to offer space in his £4 million London mansion to a refugee. The overpaid football pundit tweets: ‘Can we make it clear that not everyone in this country is heartless. These poor people deserve the help of their fellow human beings.’

A few days with that sanctimonious, virtue-signalling bore would have even the most desperate asylum-seeker begging for a ticket back across the Channel.

Frank Rothwell, 98, is one of the few surviving British soldiers who fought the Japanese and will mark the 75th anniversary of VJ Day. ‘When we heard the news… I kneeled down and said a thank you prayer,’ he recalled.

Today, he’ll cite the Kohima Epitaph: ‘When you go home, tell them of us and say, For your tomorrow, we gave our today.’

Supermodel Cara Delevingne, 28, posts a snap with rumoured new love Kaia Gerber, 18, their feet entwined and each with a ‘solemate’ tattoo.

But love can fade, tattoos don’t, so it’s risky inking your sweetheart’s name on to supple young skin. You may yet find you have put your foot in it.