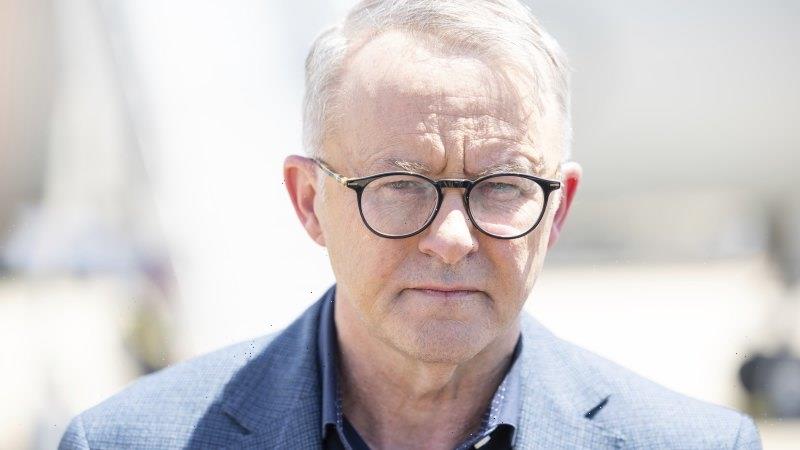 Madrid: Anthony Albanese has said Russia’s atrocities in Ukraine are uniting the democratic world against Vladimir Putin’s regime, as he joined a chorus of international condemnation over the Kremlin’s missile strikes on a busy shopping centre.

The prime minister echoed the dismay of world leaders, who branded the attack “abominable” on Tuesday and vowed to hold Putin accountable for the war crime as NATO forces increased the number of troops on high alert to more than 300,000. 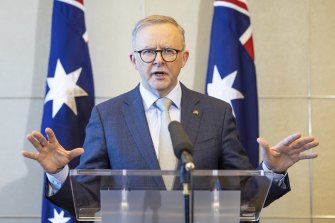 Prime Minister Anthony Albanese is still weighing up whether to risk a trip to Kyiv.Credit:Alex Ellinghausen

The head of Britain’s armed forces, General Sir Patrick Sanders, warned that the West must be prepared to act rapidly to contain Russian expansionism, comparing it to the rise of Nazi Germany.

In a major speech on Tuesday he said the world was facing its “1937 moment” and must be ready to “fight and win” to ward off Putin.

Albanese said the latest missile strikes in Kyiv and Kremenchuk reinforced the view war crimes were being committed by Russian forces in Ukraine, and that the “illegal war of aggression” must come to an end.

Speaking to reporters ahead of a meeting with Spanish Prime Minister Pedro Sanchez on Tuesday afternoon (AEST), Albanese said the world had seen “a tragic consequence” of Putin’s reckless acts of violence and terror.

“This is a civilian target,” he said. “This reinforced the atrocities being committed in an illegal war of aggression by Russia and why it must stop.

“It’s one of the reasons why I am here at NATO … the world looks at what is going on and collectively condemns it.”

The latest attacks on Kyiv and surrounding cities threaten the Australian leader’s potential trip to the Ukrainian capital later this week. The trip is still subject to security evaluations.

Albanese said Australia was also considering boosting its diplomatic presence in Kyiv by reopening its embassy and that he would like an ongoing “on-ground presence” in the war-torn nation in the coming weeks. 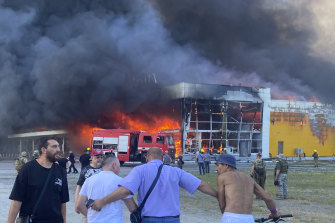 People watch as smoke pours from a crowded shopping mall in Kremenchuk after a Russian missile strike.Credit:AP

The Morrison government evacuated the embassy in early February before the invasion and moved its operations to a temporary office in the city of Lviv. Officials were later sent to Poland to assist Australians fleeing the war.

“That is one of the issues that has been examined over recent days and weeks. And we’ll continue to do that,” Albanese said.

Following his meeting with Spain’s Sanchez, Albanese declared trade talks were back on track with the European Union following a deterioration in relations. He said there had been two impediments in advancing a deal.

“One was the Australian relationship with France and the breakdown that had occurred in recent times given France’s leadership role in Europe,” he said. 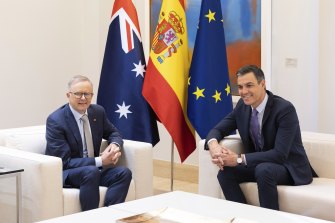 He hoped negotiations would soon resume and accelerate ahead of the European elections in the first quarter of 2023.

NATO Secretary-General Jens Stoltenberg announced on Tuesday the most significant overhaul of the alliance’s defence strategy since the Cold War, saying NATO would boost its defence forces and move to fortify borders against any Russian attack.

Speaking ahead of the NATO leadership summit, he said: “We will transform the NATO response force and increase the number of our high readiness forces to well over 300,000.

“Russia has walked away from the partnership and the dialogue that NATO has tried to establish with Russia for many years. They have chosen confrontation instead of dialogue. We regret that – but of course, then we need to respond to that reality.”

Rescuers were combing the remains of a shopping centre in Kremenchuk, central Ukraine, on Tuesday in a desperate attempt to find survivors from what President Volodymyr Zelensky called a “calculated hit” by Russia on a non-military target.

More than 1000 people were inside when two Russian missiles struck, Zelensky said. At least 25 people required hospital attention, while about 36 were missing, according to the local governor. 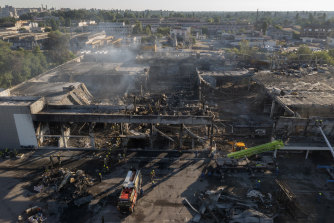 Ukrainian firefighters work to clear debris at a shopping centre destroyed by a rocket attack in Kremenchuk.Credit:AP

In a joint statement, Group of Seven leaders said they “solemnly condemn” the “abominable” attack on the shopping mall.

“Indiscriminate attacks on innocent civilians constitute a war crime. Russian President Putin and those responsible will be held to account.”

The UN Security Council will meet on Wednesday at Ukraine’s request following the attack.

Russia has not commented on the strike but its deputy ambassador to the United Nations, Dmitry Polyanskiy, accused Ukraine of using the incident to gain sympathy before the NATO summit, which begins on Wednesday morning.

Leaders will discuss how to balance the growing threat from China’s military advances and new cyber capabilities, as well as global crises including food and energy supply concerns, against the danger posed by Russia and its war in Ukraine.