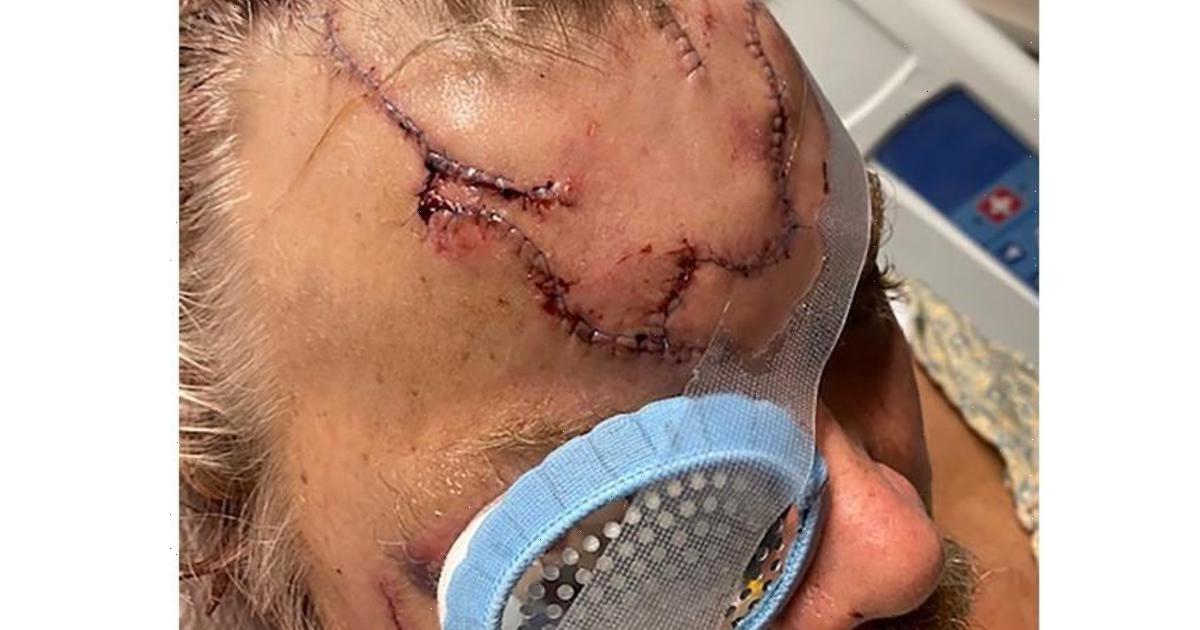 Anchorage, Alaska — Allen Minish was alone and surveying land for a real estate agent in a wooded, remote part of Alaska, putting some numbers into his GPS unit when he looked up and saw a large brown bear walking about 30 feet away.

“I saw him and he saw me at the same time, and it’s scary,” he said by phone Wednesday from his hospital bed in Anchorage, a day after being mauled by the bear in a chance encounter.

The mauling left Minish with a crushed jaw, a puncture wound in his scalp so deep the doctor told him he could see bone, lacerations and many stitches after a 4½-hour surgery. He also is wearing a patch over his right eye and says the doctors are worried about it.

All that damage came from a very brief encounter – he estimates it lasted less than 10 seconds – after he startled the bear Tuesday morning just off the Richardson Highway, near Gulkana, about 190 miles northeast of Anchorage.

The bear, which Minish said was larger than 300-pound black bears he has seen, charged and closed the ground between them in a few seconds.

Minish tried to dodge behind small spruce trees. That didn’t stop the bear; he went through them. 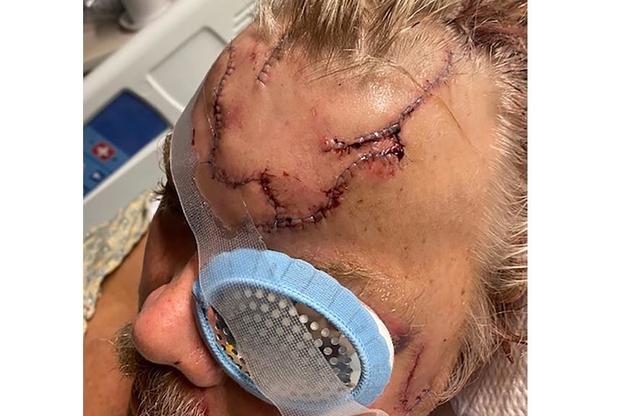 As the bear neared, Minish held up the pointed end of his surveying pole and pushed it toward the bear to keep it away from him.

The bear simply knocked it to the side, and the force knocked Minish to the ground.

“As he lunged up on top of me, I grabbed his lower jaw to pull him away,” he said, noting that’s how he got a puncture wound in his hand. “But he tossed me aside there, grabbed a quarter of my face.”

“He took a small bite and then he took a second bite, and the second bite is the one that broke the bones … and crushed my right cheek, basically,” he said.

Minish told CBS Anchorage affiliate KTVA-TV there then came a moment of realization when the bear — put its mouth over his head.

When the bear let go, Minish turned his face to the ground and put his hands over his head.

And then the bear just walked away.

He surmises the bear left because he no longer perceived Minish as a threat. The bear’s exit – Alaska State Troopers said later they didn’t locate it – gave him time assess damage.

“I realized I was in pretty bad shape because I had all this blood everywhere,” he said.

He called 911 on his cellphone. While he was talking to a dispatcher, he pulled off his surveyor’s vest and his T-shirt and wrapped them around his head in an attempt to stop the bleeding.

Then he waited 59 minutes for help to arrive. He knows that’s how long it took because he later checked his cellphone record for the length of the time he was told to stay on the line with the dispatcher until rescuers arrived.

At one point, he was able to give the dispatcher his exact coordinates from his GPS unit, but even that was a struggle.

“It took awhile to give them that because I had so much blood flowing into my eyes and on to the GPS, I kept having to wipe it all off,” he said.

He said one of the rescuers called him a hero after seeing how much blood was on the ground.

Rescuers tried to carry him through the woods to a road that parallels the nearby trans-Alaska pipeline to meet an ambulance. That didn’t work, and he said they had to help walk him a quarter mile through swamps, brush and trees. From there, he was taken to a nearby airport and flown to Providence Alaska Medical Center in Anchorage by a medical helicopter. He is listed in good condition at Providence.

Before help arrived, he worried about the bear returning to finish him off. “I kept hearing stuff,” he said, but every time he tried to lean up to look around, he became dizzy from the loss of blood.

“He didn’t come back, and so I just lay there and worried about it,” he said.

Minish, 61, has had his share of bear encounters over the 40 years he’s lived in Alaska, but nothing like this. He owns his own surveying and engineering business, which takes him into the wild often.

“That’s the one lesson learned,” he said. “I should have had somebody with me.”

He left his gun in the vehicle on this job but said it wouldn’t have mattered because the bear moved on him too fast for it to have been any use.

He can now add his name to the list of six people he knows who have been mauled by bears in Alaska.

“I guess I feel lucky,” Minish said of his encounter with the bear, after someone told him it’s better than being dead.

“In all honesty, it wouldn’t have mattered either way. You know, if it killed me, it killed me. I had a good life; I’m moving on. It didn’t kill me, so now let’s move on to the other direction of trying to stay alive,” he said.

Minish told KTVA he’s fine — he even plans to go back to work Monday, less than a week after the near-fatal attack.

“Male bear, wasn’t doing anything wrong, just walking, 2 to 3 feet at the shoulder,” Minish reflected to the station. “Four to six years old, brown bear. And it was just, wrong place, wrong time for me and the bear. And everything happened so fast.

“Maybe I should’ve been wearing bells,” he added, “but my GPS is always squawking so loudly so much, I usually don’t think about it.”

Minish also said he had trouble sleeping Tuesday night, haunted by visions of the mauling, but that he’s trying to stay in good spirits and even cracks jokes with his nurses when they come in.