Child counsellors and psychiatrists have voiced their concern as new state government figures show a surge in teens presenting at emergency departments for mental health issues during Victoria’s lockdowns and school closures.

But some mental health workers have found a range of children do not find home schooling as difficult as others, with online learning suiting particular personality types. 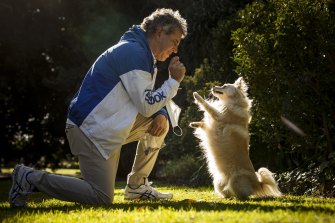 Alberto Veloso is a child psychiatrist and paediatrician at the Relational Minds clinic in Sunbury, which focuses on the mental health of children and their families. He said a surge in mental health issues among children during Melbourne’s six lockdowns had been fuelled by school closures – which had awoken dormant issues.

“A lot of these kids have issues that have been undiagnosed until now and they are presenting in this way because they have been flying under the radar,” Dr Veloso said.

He said the latest prolonged shutdown of schools had revealed “the undiagnosed and unrecognised issues in our community – children’s usual coping mechanisms have been taken away”.

A mental health report tracking wellbeing, published last week by the Victorian government, shows the number of children aged up to 17 presenting to emergency departments rose when lockdowns began. And a survey of 312 young people by the Commission for Children and Young People, released in June, found about half feeling “bad” or “terrible” as a result of the pandemic. One-third reported feeling “average” and 20 per cent said they felt “good” or “great”.

Dr Veloso said the key to addressing mental health issues in children was offering better support to parents to get help.

“Parents need to look after themselves and be supported – that is what is going to keep the kids OK.”

Concern over mental health issues led the Victorian government on Tuesday to announce $22 million in new funding, including $13 million for 20 new pop-up clinics across the state.Mental Health Minister James Merlino, who is also Education Minister, said Victorians were “struggling with their mental health and wellbeing”.

Psychiatrist Pat McGorry said the pandemic was causing issues for young people who were “really suffering”, along with their parents. He said programs that helped parents were important.

“Young people can’t survive and flourish unless the scaffolding around them is strong and able to cope. We all know that the parents of Victoria are really struggling at the moment. The teachers are. And the mental health workforces as well,” Professor McGorry said.

John Chellew is director of the St Kilda-based School Refusal Clinic, which works with children who feel unable to attend school when classes are on. He said when schools were open, about 5 per cent of children felt they could not attend. The longer children were out of school, the more difficult it was to get them to return, he said.

Mr Chellew expects the percentage of children not attending once school returns will rise to about 15 per cent.

He said schools were trying to engage children as best they could and for many students – particularly those struggling with social anxiety – online learning worked well. “They don’t have the worries about engaging with their peers,” he said. “They haven’t got the pressure of classroom and playground worries.”

Mr Chellew does some telehealth but much of his treatment with children is conducted while walking and talking in the park, allowed under the state’s COVID-19 rules if masks are worn and social distance is maintained.

He always has his therapy dog Max – a three-year-old Pomeranian crossed with a Japanese spitz – with him during these sessions.

“Some mothers [report] their children have had difficulty engaging with counselling online, so when they come to a park to meet a guy with a dog, they really enjoy it and want to come back.”

Mr Chellew said many students had not engaged with online learning, despite the effort of teachers. “Particularly boys because they tend to learn more by doing rather than sitting behind a screen.”

He said many children were having sleep difficulties, with some seeking the support of their parents at night. “These kids are feeling disconnected because all of their normal activities – playing, competing, having fun, climbing trees, playing socially, engaging in team sports – they have all of this emotional energy that isn’t being expended as it used to be.”