ABC broadcaster Jon Faine is gearing up to address his loyal audience for the final time.

Friday's program, to be broadcast live from a sold-out event at Melbourne's Town Hall, will feature a long list of guests including Premier Daniel Andrews. It is expected adoring fans will turn up to the event with farewell gifts despite the veteran broadcaster urging them to instead donate their money to an Indigenous charity. 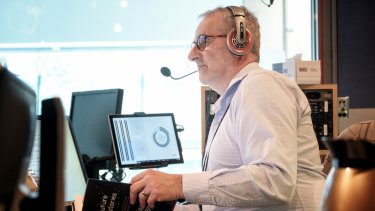 Ask Faine what he thinks of the farewell party, and he's quick to reply that he doesn't understand what all the fuss is about – even though he's been a familiar voice to morning radio listeners for more than two decades.

"I'm not a big one for going back and digging into my own entrails," the 63-year-old says. "I don't do that. I haven't gone back to listen to old shows. Recently, because I'm finishing, I've had to watch some archival footage of myself and there's things there I don't even remember. I never set out to do this as a career. It just sort of incidentally happened."

But Faine's staunch humility doesn't mean Friday's episode won't come without a dose of self-reflection. The veteran broadcaster says listeners can expect him to discuss topics such as the future of the media, how Melbourne has changed over the decades and maybe – just maybe – what he would have done differently if given the chance.

The ABC Radio Melbourne presenter is renowned for his combative political interviews and impeccable knowledge of local, state and federal policy. And on Friday, Faine will have the chance for one last political knockout – maybe even several.

Every living Victorian premier except for Denis Napthine and Jeff Kennett is set to join Faine on-stage during the show.

"It's great fun," Faine says of political interviews. "Kennett's cup of tea, Tony Abbott's wink, Turnbull's 'buy your kids a house'. Those are iconic moments. To be able to put a piece in the jigsaw puzzle there, it's a remarkable privilege.

"All the premiers who are alive – from John Cain through to Daniel Andrews – have been invited. Denis Napthine does a community radio station in Warrnambool on a Friday, so he can't come because he's on air at he same time, which is a pity because he's a decent man. Jeff Kennett declined, which is a pity. We wanted to get them all in the same place at the same time."

So what happens if major news breaks during the town hall event?

"We cover it," Faine says without hesitation. "Absolutely."

Jon Faine's final program will air on ABC Radio Melbourne live from Melbourne's Town Hall on Friday, October 11 from 8.30am to midday.