A less than rosy reunion. Rachel Recchia and Tino Franco got into a heated exchange on The Bachelorette: After the Final Rose on Tuesday, September 20 before she agreed to give runner-up Aven Jones a second chance.

‘The Bachelorette’ After the Final Rose: Broken Engagements, Weddings, Babies, and More!

The flight instructor, 26, and general contractor, 28, split while the season was airing after Tino admitted to kissing another girl. Before he came on stage, Rachel revealed during After the Final Rose that she has “love” for Tino but isn’t in love with him anymore.

“From the bottom of my heart I’m sorry for what I did,” Tino said. “When we first got engaged, it was amazing. We were so sure of each other and you are the best partner I could’ve asked for. I’m still always going to appreciate you for that. Then, weeks leading into the episodes airing, it got distant. It got hard. I can’t even imagine what you were going through. Truly, I can’t. I’ve never done your role. I wish everyone really got to see, like, the love story that we lived.”

Earlier during Tuesday’s episode, viewers watched Tino propose to Rachel. As the pair struggled to find their footing post-show, he was unfaithful. During AFR, they argued over what led to his indiscretion.

“There is no excuse for what you did. You broke my heart,” Rachel said, denying that they were ever “on a break” from their engagement. “I don’t understand, like, you are literally still running in circles. We are up here and nothing is making sense to me still.”

When Tino responded, “Rachel, I understand that you were really hurt. And, you know, I don’t even want to relate [it] to how I felt when we said we were giving the ring back,” she vehemently denied ever saying she wanted to give the ring back. 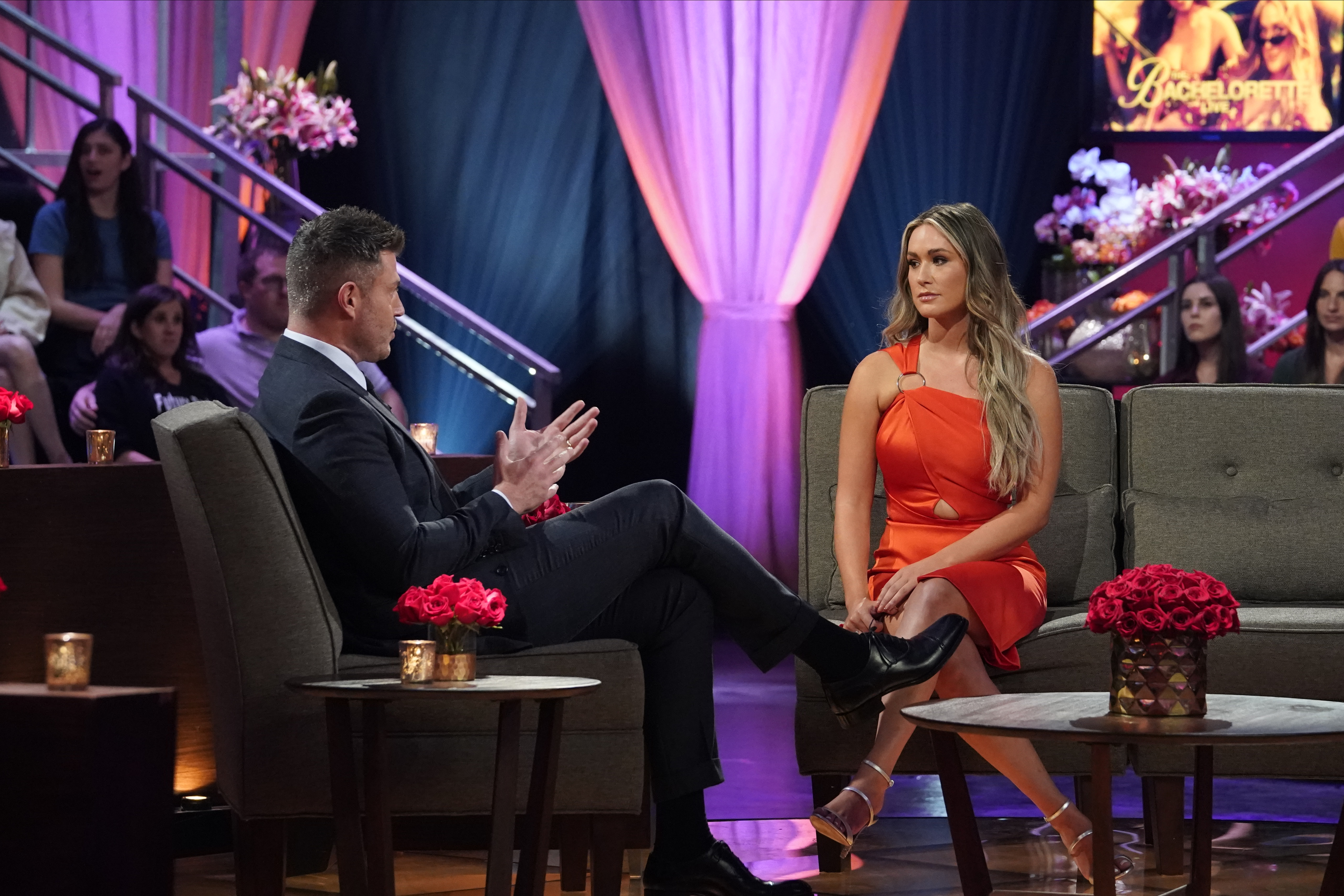 After Tino admitted that there was no excuse for his actions, runner-up Aven appeared.

“You don’t really deserve any of this, anything that happened between any of us. I was just wondering if you wanted to maybe get out of here and just catch up?” he asked.

In front of Tino, Rachel declared: “I would love nothing more.”

Rachel and Tino’s love story began during the July premiere, with the California native receiving the first impression rose. In August, the pilot gushed to Us Weekly that Tino was someone she felt “very safe around.”

“He chose me from the beginning,” Rachel said on Us‘ “Here for the Right Reasons” podcast. “And it was really nice to be able to share the date with him in Paris and really get to know him more.”

Their relationship hit a rough patch when Rachel felt that Tino’s parents “hated” her after his hometown date. The Bachelorette contestant insisted that his mom and dad would come around when they spent time with Rachel outside of the show. Things went better when Rachel introduced Tino to her parents.

‘Bachelor’ and ‘Bachelorette’ Engagement Rings Through the Years

“In the most genuine way I can put it, your daughter does mean the world to me,” he told Rachel’s father during part one of the finale. “I’m going to make your daughter happy forever.”

Elsewhere during part two of the finale, co-lead Gabby Windey got engaged to Erich Schwer. The twosome will also come face to face at After the Final Rose amid allegations from the New Jersey native’s former flame that Erich dumped her to go on the show, alleging that he said the series wasn’t “real.”