Woman, 29, who’s spent £15k on plastic surgery to transform into the ‘ultimate bimbo’ is slammed by This Morning viewers who brand her an ‘Abba reject’

A woman who calls herself ‘the ultimate bimbo’ has been slammed by This Morning viewers, who say her bold look gets in the way of her message of ’empowerment’.

She joined Holly and Phil on the This Morning sofa to discuss her efforts to empower women, and says that she has a hyper feminine look to prove that girls can look girly and still be intelligent.

But viewers were unconvinced by her message, saying they were distracted by her bold look. 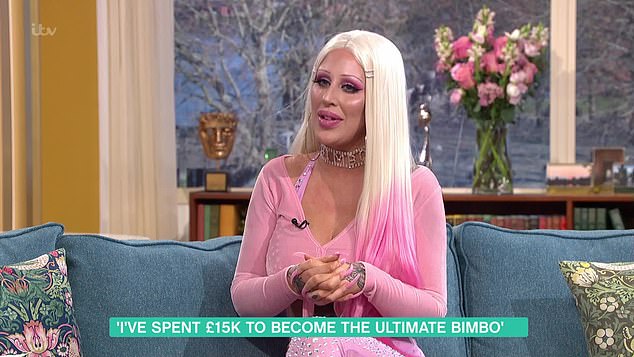 Alicia Amira, 29, argued that women who are hyper feminine should still be considered intelligent

One wrote on Twitter: ‘You don’t look hyper feminine dear. You look like a drag queen wearing fake comedy boobs.’

Alicia, who has spent over £15,000 on plastic surgery, preaches how great it is to be a ‘bimbo’ and is attempting to reclaim the term.

She said she has always loved the look of ‘bimbos’ but insists that she loved herself before her many surgeries.

Phil, who seemed confused by the term ‘bimbo’, questioned whether you can look like a bimbo and be bright at the same time.

But Alicia clarified, telling the This Morning presenters that she finds being a ‘bimbo’ empowering: ‘The word is Italian, where it means baby.’

Viewers were distracted by Alicia’s bold look, with some saying that her appearance was distracting from the important argument she was making 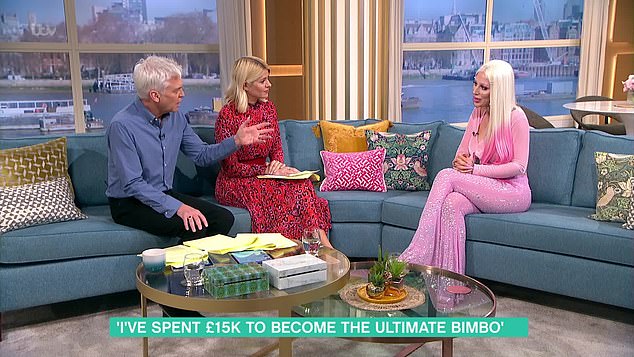 Phil and Holly questioned Alicia on her extreme look, which she argues shouldn’t detract from whether she is considered intelligent

She went on: ‘My aim is to show people, you don’t have to be stupid to be a bimbo.

‘For a long time I didn’t look like this, I didn’t embrace my feminine side as much, as I didn’t think I would be interpreted as smart if I did.’

Holly appeared to agree, and questioned whether women should not embrace their feminine side if they want to be taken seriously.

Swedish Alicia went on: ‘In a lot of cases, yes. We had a prime minister back in the day, who carried fabulous handbags, and people were always commenting on her looks.’ 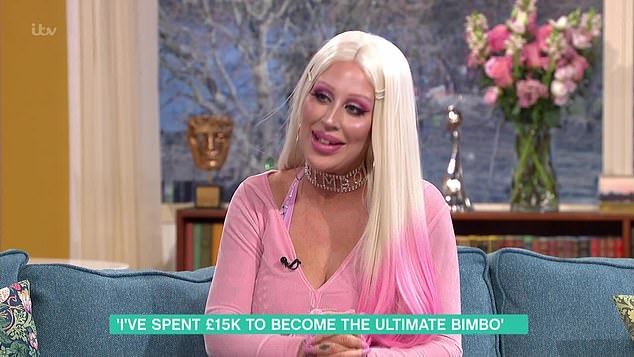 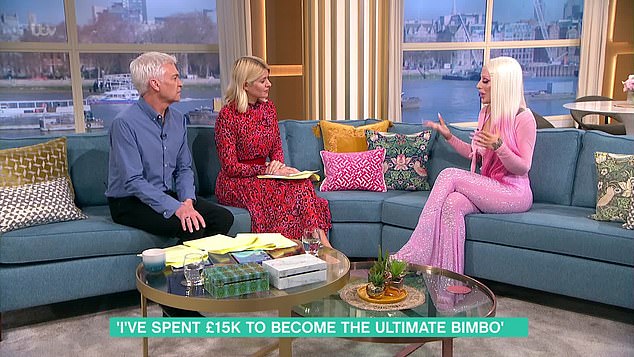 Holly jumped in, referencing the focus on Theresa May’s kitten heels early on in the prime minister’s time.

‘I just want to encourage women be confident enough to embrace their own sexuality.’

Another commented:’She looks like an Abba reject’, while others simply wrote:’No, just no!’

Viewers were critical of Alicia’s appearance, and slammed the adult film star for her extreme plastic surgery look