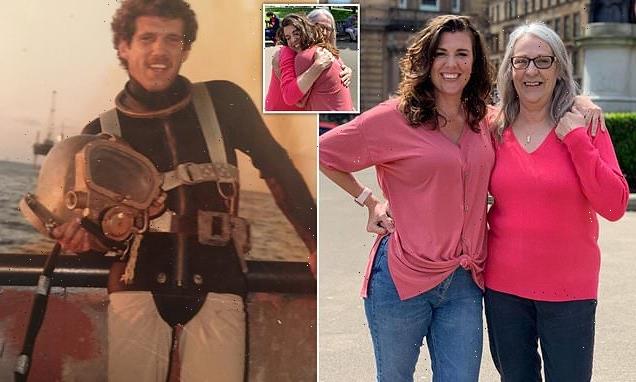 US woman, 37, was overjoyed to track her birth parents down in the UK after years of searching – only for her mother to pass away months after their reunion, while her father died before they could meet

An American woman who spent her whole life searching for her birth parents finally tracked them down in Britain – just months before they both tragically passed away.

Megan Kennedy,  37, grew up knowing she was adopted. And on her 18th birthday she applied for her original birth certificate, finding her biological mother’s name – Patti Neil.

In December 2018 new records were made available online. And after trawling through them, Megan eventually found her mother’s details.

She discovered her mother lived in Scotland, where Megan was set to travel from her home in Birmingham, Alabama, in June 2019. 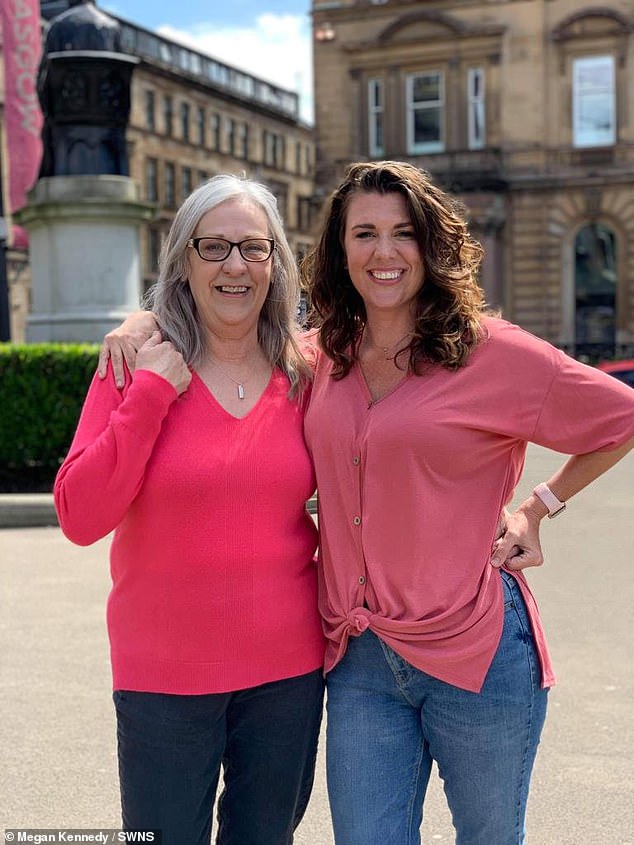 Megan Kennedy with her biological mother Patti Neil, who she met in 2019 in Scotland after years of searching 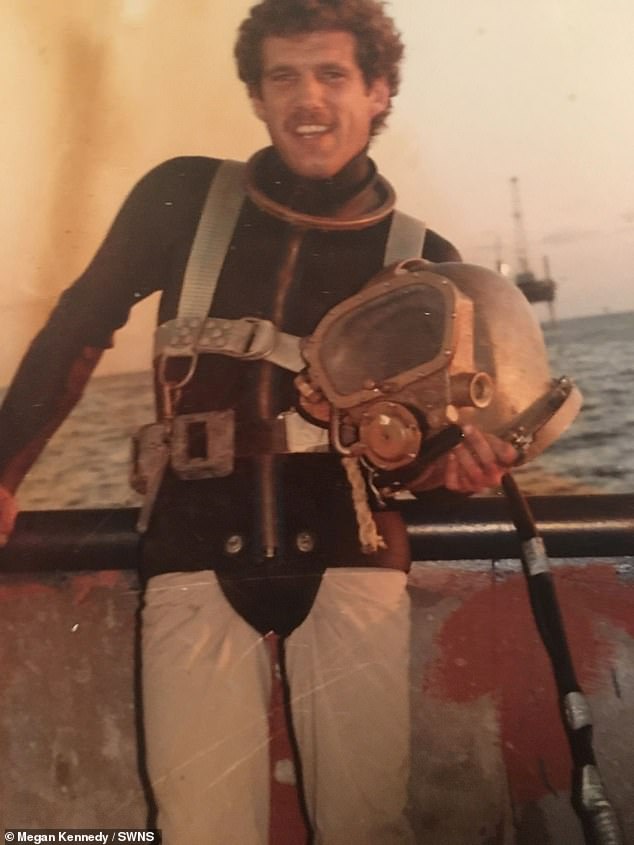 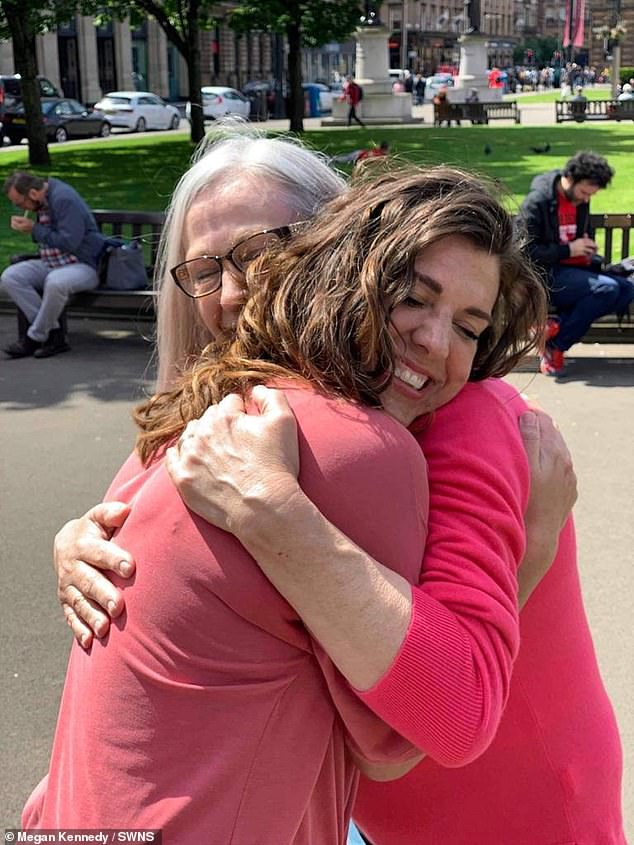 Megan Kennedy, 37, grew up knowing she was adopted and on her 18th birthday she applied for her original birth certificate and found her biological mother’s name – Patti Neil.

Megan reached out to her birth mother, Patti, 64, a retired sales person, on Facebook, who was delighted to hear from her – and the pair reunited in Glasgow, sitting and chatting for hours.

But sadly, Patti died in February 2022 unexpectedly after struggling with stomach issues.

Megan, a wedding photographer, said: ‘It’s almost hard to put into words how it feels – it’s an immense feeling of peace.

‘Every birthday I spent hours looking for Patti, it’s amazing to think I will never have to look again.

‘It’s bittersweet, but I’m so grateful I reconnected with my biological parents before they passed.’

These matches led her to discover her biological father, Johnny Cavalier, 62, a retired businessman.

But Johnny tragically died in February 2022 from polycystic kidney failure before they could meet in person. 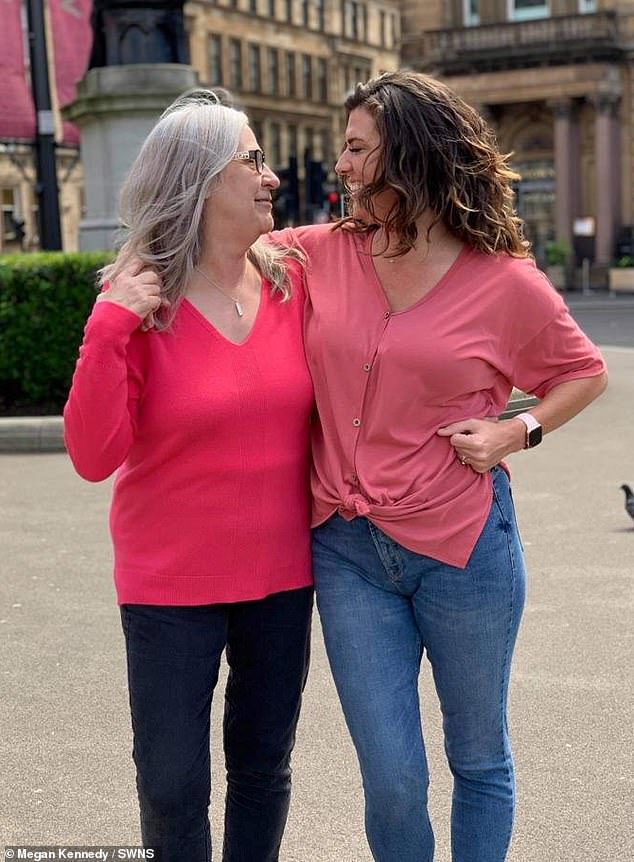 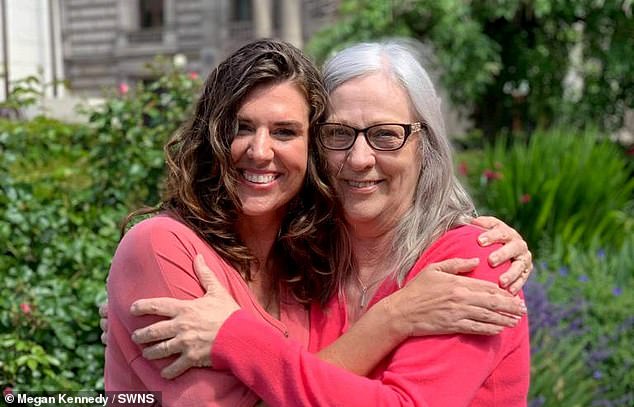 Megan said when the pair met at Glasgow train station, she felt ‘every emotion’ and ran across the platform to hug her mother

In total, Megan travelled more than 4,000 miles across the world to reunite with her long-lost family – and despite losing both birth parents, feels she has found her ‘true identity’ and ‘all her people’.

She recalls how she first introduced herself to her biological mother.

Reaching out to her on Facebook, she became nervous because Patti did not respond straightaway.

She said: ‘I told her thank you for giving me up for adoption – I introduced myself.

‘I wrote, “Hi this may be an odd message – I’m looking for my biological mom, her name was Patti Neil Whiting, I thought I looked a lot like you”.

‘I screamed – it was a guttural scream.

‘Every dream and wish I had come true, every birthday I’ve ever had I’ve looked for her.’

Megan was over-the-moon when her biological mother, Patti, agreed to meet up in June 2019.

She said: ‘I was so nervous but so excited.

‘I felt every feeling you could have felt – we met at Glasgow train station and literally ran across the platform to hug each other.

Patti, who had dual citizenship, grew up Fort Worth, Texas, and when she was 27 went to go and live with her sister, Sherrie, in Baton Rouge, Louisiana.

Patti – who was married at the time – worked on the boats as a deck hand and fell for ‘lady’s man’, Johnny, 24, who was a diver. 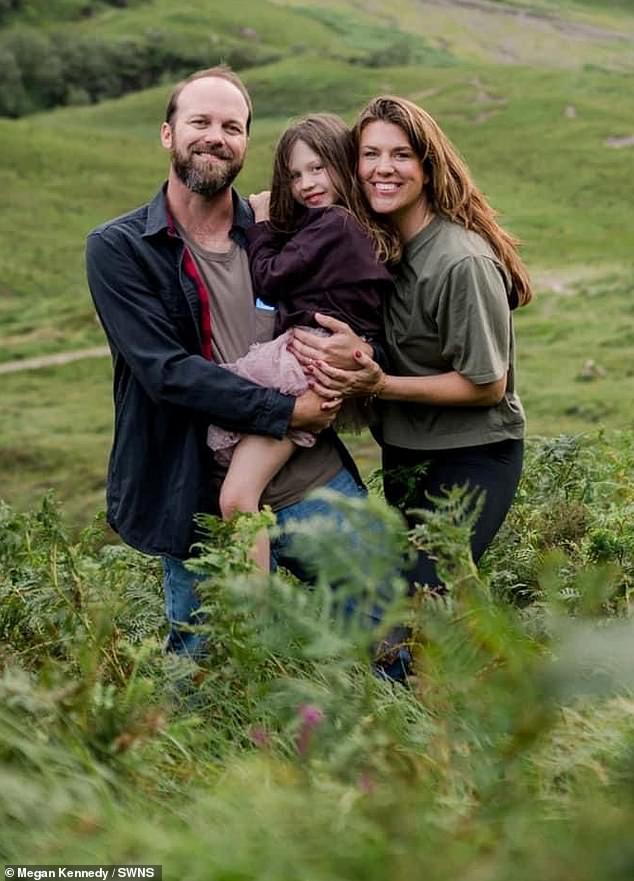 Meghan, pictured here with her family, husband Lee and their young daughter while on their visit to Scotland 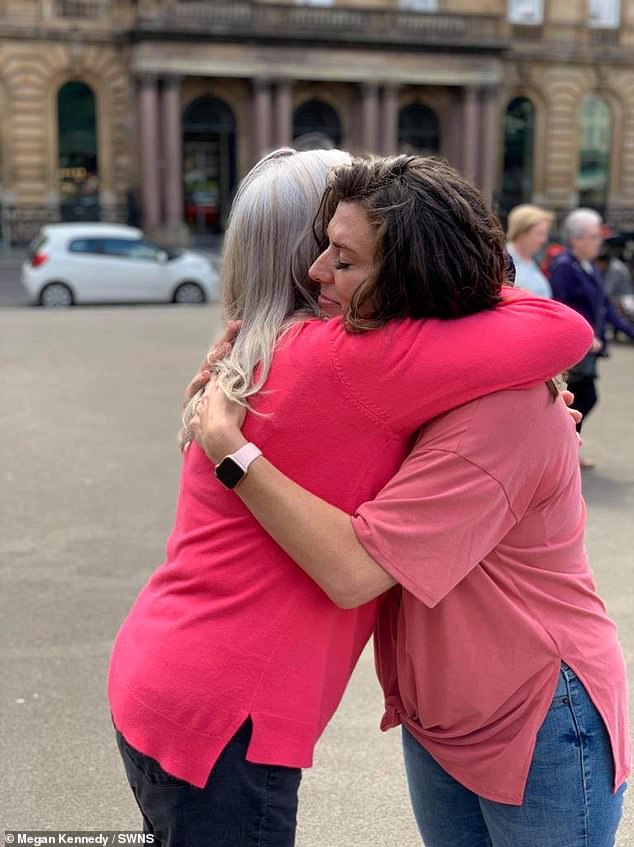 Patti says she didn’t tell Johnny when she fell pregnant – as she was already married. She says she gave Megan up in the hope she would have a better life.

She told Megan they had a month-long relationship and that’s when their daughter was conceived.

Patti says she didn’t tell Johnny when she fell pregnant – as she was already married.

She says she gave Megan up in the hope she would have a better life.

She gave birth in Mobile, Alabama, US, where Megan was adopted by Arthur Forehand, 71, a retired pharmacist, and Cassie Wilson, 72, a medical transcriptionist, through an adoption agency.

As for her father, Patti couldn’t remember his name, but Megan received a DNA match on website for a half-sister, Kayla, 30, stay-at-home mother, from New Orleans, Louisiana, US.

‘I was ecstatic, I cried because I’ve always looked for a mother and a father – I never thought I would have siblings,’ she said.

‘It was the biggest bonus.’

The sisters downloaded their ‘raw DNA’ and uploaded it onto another website – GEDmatch – and the data comparison revealed they shared an ‘X chromosome’ – meaning they shared a father.

In September 2020, the sisters were on FaceTime and they both received anmatch out of the blue.

The website revealed they had a match – an aunt, Kathy Colllins, 66, in Highlands, Texas, US – and they quickly reached out.

Kathy told them: ‘There’s going to be some surprises, you need to buckle in..’

Their aunt revealed she had two brothers – one had been married since high school, so they ruled him out as a potential father, she then sent over photographs of her other brother, Johnny.

‘When I saw the photo, my heart dropped to my toes,’ Megan said.

‘I knew it was him, he looked like Kayla.’

Kathy reached out to Johnny on the girls’ behalf, and he asked for them to send letters.

‘He completely accepted us both, he was so open and sweet and wanted to get to know us,’ Megan said.

‘He has a wife, Ragnhildur, 35, two years younger than me and a seven-year-old child, Ajay, my little brother,’ she revealed.

Johnny and his family all lived in Roatán, an island off the coast of Honduras.

In September 2021 Megan was set on travelling to meet her father but she was sceptical of Covid, had her three-year-old, Cora, and flights were extortionate.

They decided to hold off but in November 2021, Johnny was diagnosed with polycystic kidney disease and Megan didn’t realise just how ill he was.

Megan was booked to finally meet her father in January 2022 but was struck with Covid and couldn’t travel.

Two weeks later, Megan received an earth-shattering phone call from his wife, Ragnhildur, to say Johnny was in hospital and it wasn’t looking good. He died a few hours later on 17th February 2022.

‘That was terrible. It was so hard, I hated we got Covid the week we were meant to go,’ Megan said.

‘I’ve had therapy that was provided to me through my adoption agency, but I miss my biological parents every day.’

In March 2022, Megan travelled down to Roatán to spread her late father’s ashes in the Caribbean sea in an emotional celebration of his life on a boat.

‘We all spread his ashes in the Caribbean Sea, and it was the only time I got to touch and hold him,’ she said.

‘We sat on the boat and stared out into the horizon, and I reflected on where this journey has taken me to find all of my people.’

Megan met her little half-brother Ajay, seven, for the first time and her step-mother Ragnhildur.

On her ancestral journey she has met her aunt, Kathy, 66, and discovered another sister, Jennifer, 36 – Patti’s daughter – who was conceived three months after she put Megan up for adoption.

‘I always had a feeling I didn’t belong and when my husband, Lee, and I married in Louisiana in 2011 I felt a strange sense of belonging, as if I were at peace,’ she said.

‘I feel like a transformed person from the woman I was in 2019, I have found all of my people.

‘When you look at your biological parents and see your features in them, it is the purest self you have ever known.’