The Crown star Jason Watkins reveals he had to apply for income support as a jobbing actor after the death of his daughter, 2, from sepsis – and was forced to tell the harrowing story of losing her ‘over and over again’

Actor Jason Watkins has recalled having to retell the harrowing story of his two-year-old daughter’s death from sepsis ‘over and over’ when applying for income support from social services.

The Crown star, 53, from Albrighton, admitted the grief from losing Maude to sepsis on New Year’s Day in 2011 still ‘hits him like a train’ and has ‘changed’ him and his wife Clara Francis.

He told how, as jobbing actors, they applied for benefits following Maude’s death, and were forced to explain what happened to her repeatedly which was incredibly painful.

Jason said that is an aspect of the benefits system that he would like to see improve, adding that they also tried to get mental counselling but couldn’t because the facility had closed down. 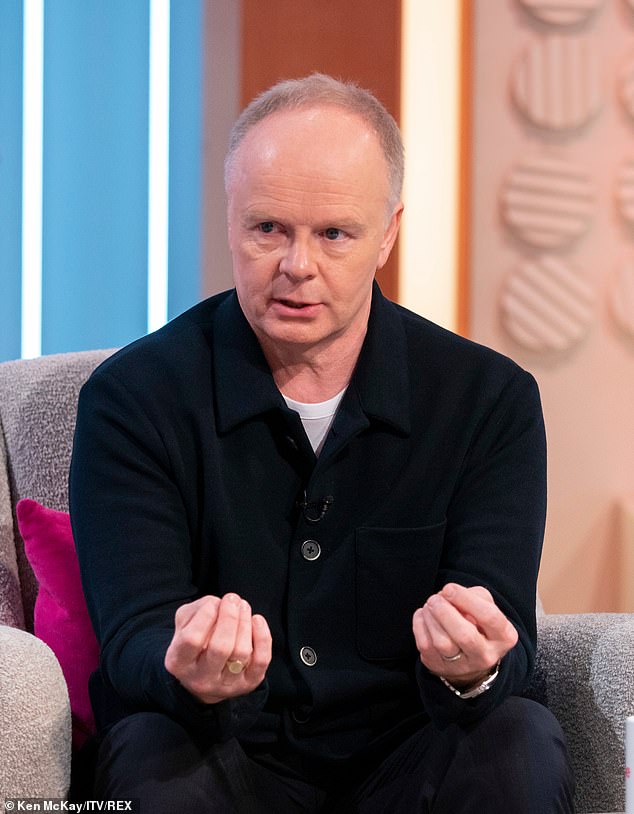 Speaking to presenter Kylie Pentelow in the latest installment of ITV’s Britain Get Talking podcast, he said: ‘We tried to get some kind of financial support at the time. Things financially have been a lot more comfortable since then.

‘But at the time I was a job actor and had had some success but I remember one time having to apply to social services just to get a little bit of income support.

‘All the way through that process Clara and I both had to retell our story over and over again. That’s one thing I’d really like to improve.

‘We also tried to get mental counselling. That particular facility closed down actually around that time and they couldn’t offer a service.’ 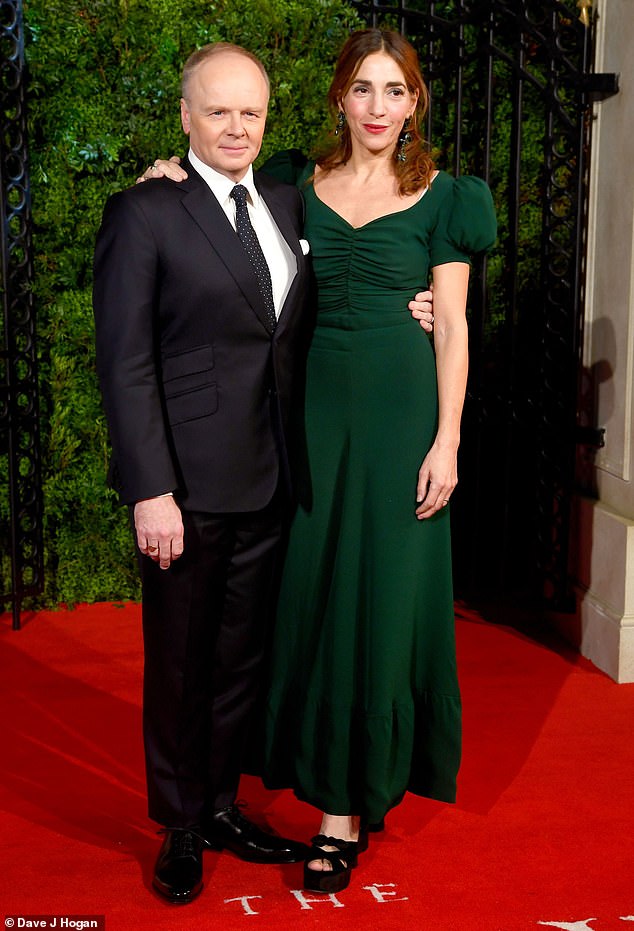 Jason Watkins, pictured with his wife Clara Francis – the mother of his three children Bessie, Maude and Gilbert – in November last year, admitted the grief from losing Maude to sepsis on New Year’s Day in 2011 still ‘hits him like a train’ and has ‘changed’ them both 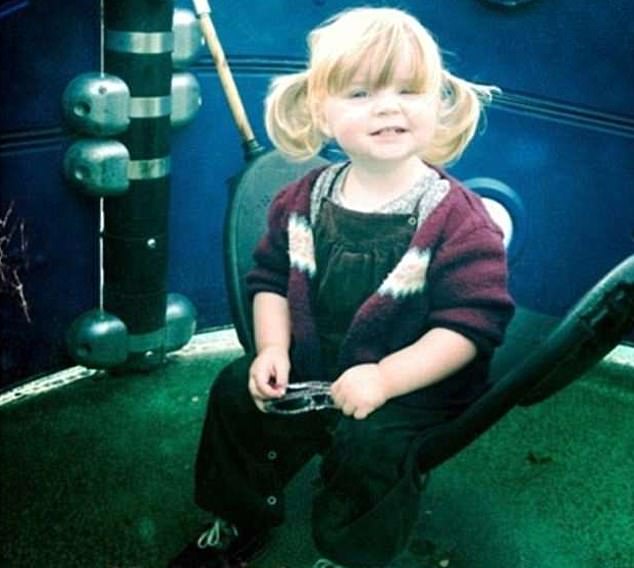 The Crown actor, 53, revealed he was ‘angry for a long time’ when Maude (pictured) died of sepsis on New Year’s Day in 2011

In 2010 a persistent cough and consequent respiratory problems prompted two consecutive visits to a hospital A&E, where Maude was initially diagnosed with croup, a type of respiratory infection.

But within two weeks of developing her first symptoms she was dead. She had in fact fallen victim to sepsis, an insidious illness in which the immune system reacts violently to infection, attacks its own tissue and eventually leads to organ failure.

Reflecting on his ongoing grief in the aftermath of Maude’s death, Jason said: ‘There are days when you just don’t want to have to think about it too much. Then of course there are days when there is nothing you can do about it but it just consumes you.

‘It’ll just hit you like a train. It could be anything. It’s cliched but you can hear or a song or see a child’s face and it all comes back. 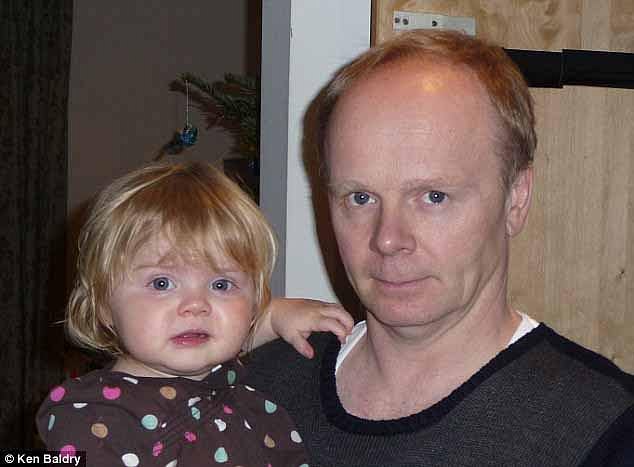 In 2010 a persistent cough and consequent respiratory problems prompted two consecutive visits to a hospital A&E, where Maude (pictured with Jason) was initially diagnosed with croup

‘But again once one has cried a bit, you feel that you have touched the thing that is most painful to you and you are able to cope better.’

On the salvation he gained from continuing to work as an actor, Jason admitted it is a ‘fantastic release’.

‘Doing comedy is great,’ he said. ‘When we lost our daughter Maude in 2011 I managed to within four or five months, go and do Trollied for Sky.

Jason admitted that it was ‘very difficult’ when the camera stopped turning and he struggled to keep going on occasion. 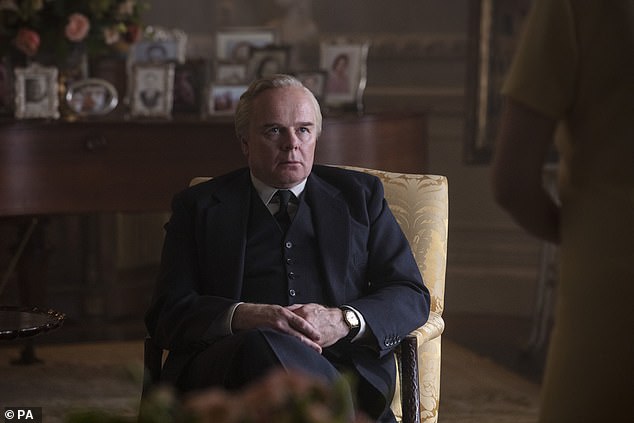 The actor, who played Harold Wilson in The Crown (pictured) previously described how the pattern of his grief changed over time, from an acute pain to a ‘heart-shaped feeling that you carry around’

‘I relied a lot on the support of not only my family but also the people I was working with, I’m also indebted to them,’ he added.

Discussing the strength gained from his relationship with wife Clara, he said the experience has changed both of them and made them more aware of each other’s mental health – and other people’s.

‘Many couples separate because grieving is difficult for both parties and people grieve in different ways,’ he said.

‘It’s a wonderful thing to hear your partner talk. One feels much closer as a result. You avoid the drift away into one’s own private grief and concerns.

‘That’s generally across all mental health issues, when somebody starts going off on their own and things get compounded. That’s why sharing and talking about it is so important.’ 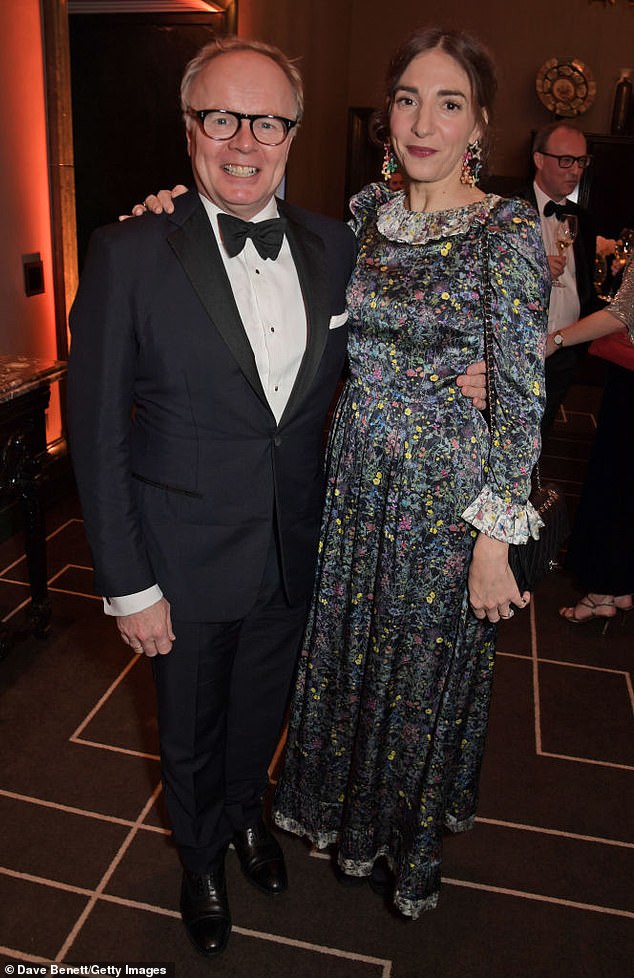 Discussing the strength gained from his relationship with wife Clara (pictured together in March 2019), he said the experience has changed both of them and made them more aware of each other’s mental health – and other people’s

Jason added that losing a child is ‘the most extreme’ thing that can befall a parent.

‘You have to deal with it,’ he said. ‘One of the ways of dealing with it is being able to share your own feelings and not feel embarrassed about sharing them. And not feel that your pain is somehow unpalatable to people. People do want to help you.’

Speaking about the impact that losing Maude had on their other daughter Bessie, he admitted explaining to her what had happened was ‘the most difficult thing’.

‘I think she knew because she was there, that was the shocking thing, the traumatic thing for her,’ he recalled.

‘Telling a child, “Your sister is not coming back” is difficult. You can use euphemisms of heaven and those sort of things. Whatever helps for you is the way to do it.

‘You have to say that she’s not coming back, that’s the difficult part. Even now, Bessie’s a teenager. And she exhibits typical teenage behaviour. Difficulties and emotional ups and downs.

‘But coupled with that, one is always thinking, “Is this born out of something else?” It’s a very difficult place to be, that.’

Jason and Clara – who already had an older daughter Bessie, 13 – decided to try for another child after Maude’s death.

‘Life was not going to rob us of our happiness. And Gilbert has brought us so much happiness,’ Jason told The Sunday Times Magazine earlier this year.

Their son, now eight, is obsessed with his iPad and Nintendo and Jason went on to explain he has to limit time on the devices to 20 minutes a day – which caused a lot of temper tantrums.

What are the key symptoms of sepsis? The ‘silent killer’ that can cause death in minutes

Sepsis, known as the ‘silent killer’, strikes when an infection such as blood poisoning sparks a violent immune response in which the body attacks its own organs.

It is a potentially life-threatening condition, triggered by an infection or injury.  Around 245,000 people develop sepsis in the UK each year and 52,000 die, according to the UK Sepsis Trust.

Instead of attacking the invading bug, the body turns on itself, shutting down vital organs.

If caught early enough, it’s easily treated with intravenous antibiotics and fluids, but these must be given as soon as sepsis is suspected – it strikes with frightening speed and, for every hour of delay, a patient’s chance of dying increases 8 per cent.

Sepsis is a leading cause of avoidable death killing 44,000 people each year

The early symptoms of sepsis can be easily confused with more mild conditions, meaning it can be difficult to diagnose.

A high temperature (fever), chills and shivering, a fast heartbeat and rapid breathing are also indicators.

A patient can rapidly deteriorate if sepsis is missed early on, so quick diagnosis and treatment is vital – yet this rarely happens.

In the early stages, sepsis can be mistaken for a chest infection, flu or upset stomach.

It is most common and dangerous in older adults, pregnant women, children younger than one, people with chronic conditions or those who have weakened immune systems.

The six signs of something potentially deadly can be identified by the acronym ‘SEPSIS’:

Anyone who develops any of these symptoms should seek medical help urgently — and ask doctors: ‘Could this be sepsis?’