Federal Opposition Leader Anthony Albanese says he “absolutely” supports a 5.1 per cent wage rise to keep up with the current rate of inflation after earlier declining to be pinned down on a figure.

It is the first time a leader has explicitly stated what they believe wage growth should be during this election campaign, which has focused on cost-of-living pressures and is occurring as the workplace umpire undertakes its annual minimum wage review. 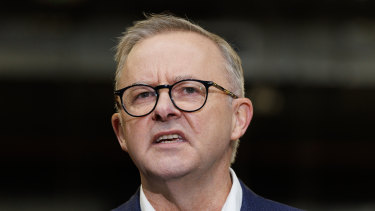 Anthony Albanese says he “absolutely” backs an increase in wages to keep up with the current 5.1 per cent inflation rate.Credit:Alex Ellinghausen

“I believe the minimum wage should at least keep up with the cost of living,” Albanese told a press conference in the Melbourne seat of Chisholm on Tuesday morning.

During an earlier interview with ABC radio, Albanese declined to specifically endorse the Australian Council of Trade Unions’ call for a 5.5 per cent increase to the minimum wage this year.

However, he honed his position when asked by a reporter later in the morning whether he would support a wage hike of 5.1 per cent “just to keep up with inflation”. Albanese responded: “Absolutely.”

Prime Minister Scott Morrison was also asked during a press conference in Sydney on Tuesday morning whether he supported a wage increase to keep pace with the cost of living.

“I support the process we’ve always had for the setting of the minimum wage in this country, and that is that it be independently assessed in a proper process, based on the best facts and information about the economy,” Morrison said, having last week declined to support an increase.

“We have always welcomed and accepted the recommendations that have come from that body.”

The headline inflation rate was 5.1 per cent over the year to the March quarter and is tipped to increase again by mid-year. The Reserve Bank forecast last week that wages would continue to go backwards in real terms until December 2023, with Morrison saying it was “a reality of the global economy.”

The RBA projects inflation will be at 4.3 per cent in June 2023, a key figure for the Fair Work Commission in determining the annual minimum wage increase.

The ACTU revised up its proposal from 5 per cent, which would lift the hourly rate in the minimum adult wage from $20.33 to $21.45, affecting about 2 million Australians who are paid the minimum wage or whose incomes are linked to the decision by a higher industry award.

Labor is campaigning to address the gender wage gap, with Albanese on Tuesday morning saying the difference represented a “structural weakness in our industrial relations system”.

Labor is endorsing a pay rise for aged care workers, almost 90 per cent of whom are women. The Coalition has not endorsed the pay rise but has said it will support any finding of the Fair Work Commission regarding wages in the heavily subsidised sector.

A study conducted for Chief Executive Women by independent firm Impact Economics has found halving the wage gap between men and women could fix the current skills shortage and create the equivalent of 500,000 additional full-time jobs.