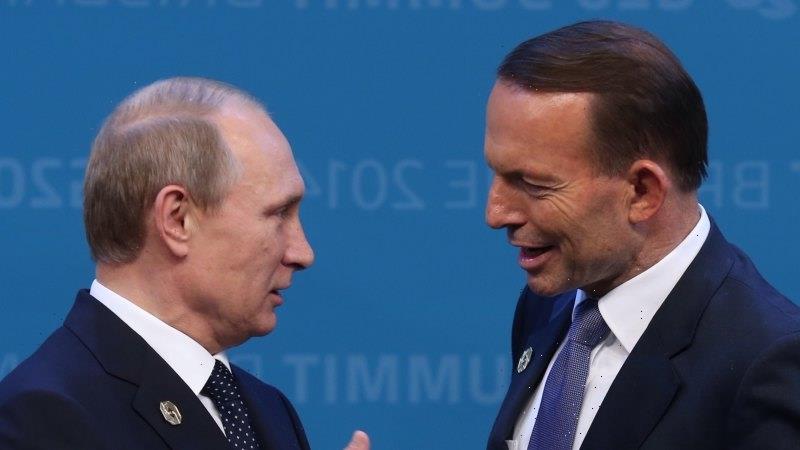 Former prime minister Tony Abbott has backed the case for a special intake of Ukrainian refugees to help people fleeing the Russian invasion, saying protection could be offered to thousands of people in the same way Australia helped those caught in war in the Balkans two decades ago.

Mr Abbott added his voice to growing calls for Australia to help ease the refugee crisis. Some 2.6 million people have already left their country and the United Nations estimates another 150,000 are crossing from Ukraine into neighbouring countries every day. 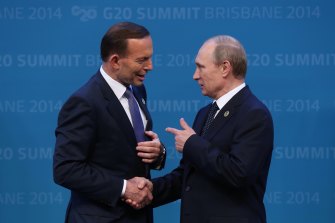 As Prime Minister, Tony Abbott welcomes the Russian President Vladimir Putin to the G20 in Brisbane in 2014.Credit:Andrew Meares

But advocates for help are at odds over the scale of the intake. The Settlement Council of Australia wants the wider humanitarian program increased to 20,000 places, much higher than the government has signalled in its talks with the Ukrainian community.

The Refugee Council of Australia is also calling for more places for Ukrainian refugees in addition to help it believes is already overdue for Afghan asylum seekers seeking protection after the fall of Kabul to the Taliban last year.

Mr Abbott said the help for Ukraine could be modelled on the temporary protection for about 4000 refugees from Kosovo in 1999. This intake came after Australia took an estimated 8500 people from Bosnia-Herzegovina and 6500 from Croatia, according to estimates from the Parliamentary Library.

“Something like what was done for the Kosovars would be fine, but frankly the most important task is doing everything we reasonably can to help the Ukrainians win,” Mr Abbott said.

“Right now everything should be secondary to helping the Ukrainians to win because they’re fighting for our freedom too.”

Immigration Minister Alex Hawke and his department has granted 3000 visas to Ukrainians since February 23, the day before the invasion, and have ensured all Ukrainian nationals in Australia with a visa due to expire by June 30 will gain an automatic extension of six months.

“The Australian government stands ready to assist Ukrainians through a range of temporary and permanent migration pathways,” Mr Hawke said in a statement on Friday.

“When someone knows they can stay in a country permanently it allows them to contribute more to society because they are part of the community,” she said.

“Them knowing that they can stay makes a big difference.”

Many refugee advocates named the arrival of 12,000 people from Syria and Iraq, including Yazidi refugees who fled attacks by Islamic State terrorists, as an example of the help that can be offered to Ukrainians. Mr Abbott led that initiative when he was prime minister in 2015.

Ms Elhelw-Wright said broader objective should be to increase the humanitarian program from 13,750 places each year to 20,000.

“We can afford a more compassionate program,” Ms Elhelw-Wright said.

Refugee Council of Australia chief executive Paul Power said the government should commit to a special intake of 20,000 visas for refugees from Afghanistan and a humanitarian intake of 20,000 places, returning to the levels seen before the 2013 election.

“Without a significant increase in humanitarian visa places, the government leaves itself with few options to respond to the emerging needs of Ukrainian refugees, the 150,000 or more Afghans who have applied for resettlement in the past six months and the many refugees displaced from conflicts in Myanmar, Ethiopia, Syria, Iraq, Democratic Republic of Congo, Eritrea, Yemen and Venezuela,” Mr Power said.