Labor went into overdrive on Monday to defend Anthony Albanese against claims of a threat to the party from blue-collar workers it will need on its side at the next federal election.

Albanese and his defenders threw everything at critics who want a shift in the federal party’s direction after seeing the 7.3 per cent swing against Labor on primary votes in the state byelection for the NSW state seat of Upper Hunter on Saturday. The swing after preferences was only 2.7 per cent. 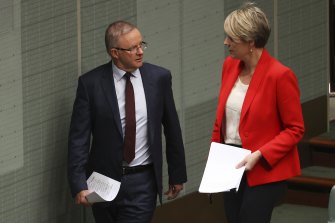 The state loss is about much more than the regional towns of the Hunter Valley because the reaction to the result plays into a real divide inside the party over how to take on Scott Morrison.

While former Labor frontbencher Joel Fitzgibbon launched a media blitz on Monday morning to urge a different approach to defeating the Prime Minister, he is not the only one who fears Labor is losing ground.

Others say it is ludicrous for Albanese and those around him to dismiss the state result as if it sends no message about the coming federal campaign.

“This result is a wake-up call,” says one MP. 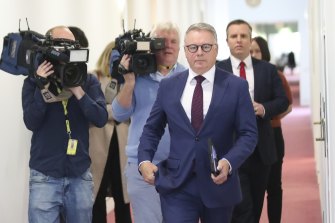 Albanese pointed on Monday to some of the gains for Labor in some parts of the electorate. This was true: at the polling station at the Muswellbrook indoor sports centre, for instance, there was a 2.5 per cent swing to Labor on primary votes and a 10.5 per cent swing after preferences.

But Muswellbrook is the hometown for Labor’s candidate, Jeff Drayton, and should have been safe.

The picture was not so positive in the nearby regional town of Singleton, where Labor’s primary vote fell 11.3 per cent at the high school polling station and 12.8 per cent at the primary school.

While the Nationals have lost support over the years due to the rise of the Shooters, Fishers and Farmers Party and a decision by Pauline Hanson’s One Nation to join the state contest, this is strange consolation for Labor when the Nationals ended up winning the seat.

After all, the electorate was marginal before the byelection and is now relatively safe for the state government after the Nationals gained the 2.7 per cent swing after preferences.

Those who play down the results note the byelection was fought on state issues and the result reflected the power of incumbency during the pandemic, with a show of confidence in NSW Liberal Premier Gladys Berejiklian.

But the power of incumbency is exactly what Albanese has to overcome when he asks voters to remove Morrison at the next election. He faces the same danger as state Labor leader Jodi McKay and other opposition leaders: how to avoid obliteration when the pandemic has, so far, cemented Australian governments in power.

One observer, Peter Brent, cautioned correctly on Monday the Upper Hunter is not the Labor base. It is a regional seat and Nationals territory. As he also pointed out, byelections have “zero predictive power” for a party’s fortunes over the longer term.

Even so, the anxiety within the Labor caucus is real. MPs in marginal electorates are not jumping at shadows: they face an election within a year that will decide their careers and livelihoods.

On tax, Albanese is biding his time before revealing whether he goes to the election with a plan to amend the “stage three” tax cuts already legislated. This has MPs worried they will be asked to stand between voters and a tax cut.

On climate, Albanese is also asking caucus members to wait for decisions on the policy to be taken to the next election. It may be too late to repair the damage from the long-running Labor split about whether to support coal mines, new gas-fired power stations or stronger targets to reduce emissions.