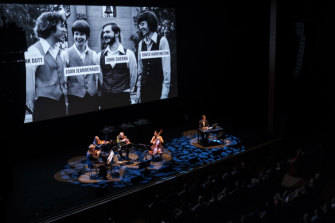 Ostensibly a filmed history of, with live music by, the Kronos Quartet – the avant-garde string quartet founded in San Francisco in 1973 – A Thousand Thoughts trawls through the group’s extensive archives and repertoire (they've had more than 1000 pieces of music written for them). But its real subject is time and experience, and the question of what is lost in perpetually trying to capture the latter for all eternity.

That’s a puzzler for the age of Instagram, in which everyone seems more obsessed with recording the moment than living it. But it’s at the heart of recorded music too: can something as ephemeral as the passage of a rosined bow over a taut string ever truly be captured?

As a hybrid form it sometimes leaves you wishing it could make up its mind and just be one thing or the other.

These are weighty questions and the inquiry is led by filmmaker Sam Green, co-director (with Joe Bini) of this “live documentary”. He enters the stage before the quartet and narrates proceedings as images relay from his laptop to a large screen behind the ensemble.

Interviews with various composers – Philip Glass, Laurie Anderson, Terry Riley – play on the screen while the quartet performs their music. Occasionally they are accompanied by a recorded passage, as in Clint Mansell’s synthesiser parts from Requiem for a Dream.

At other times collaborators appear on screen and audio: Wu Man on pipa (a Chinese stringed instrument), Fode Lassana Diabate on the Malian xylophone, and Tanya Tagaq, the Canadian Inuit throat-singer whose virtuosic solo provides one of the most remarkable moments of the show.

It’s an ambitious project that teeters on the edge of preciousness without ever toppling. As a hybrid form, though, it sometimes leaves you wishing it could make up its mind and just be one thing or the other.

Green seems to acknowledge this when he introduces the final piece, Orange Blossom Special. A bluegrass standard written by Ervin T. Rouse in 1938, it needs no tricks to remind us what we’re really there for: to experience the brilliance of a quartet that has made light of the boundaries between popular and classical music for close to five decades. Now that’s a moment to savour.