When Bad Dreems began recording their third album, Doomsday Ballet, producer Burke Reid explained to the Adelaide (and now partly Victorian) five-piece’s drummer, Miles Wilson, that he wanted him to play so fast it felt like the song would fall apart. Reid intended to exhaust Wilson, so the songs slowed down a few desperate beats per minute. 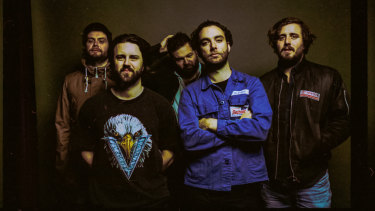 “My arms were wrecked afterwards,” Wilson recalls, and he couldn’t be happier.

After two albums of mostly fierce and unadorned pub rock – 2015’s Dogs at Bay and 2017’s Gutful – built them a national audience, Doomsday Ballet is a striking evolution for Bad Dreems. Their propulsive rants are now counterpointed by evocative textures, their fury has an existential undertow, and their mid-tempo ballads reveal a bittersweet beauty.

The world is absurd. The fact that Donald Trump is President of the United States is absurd.

“We were never a band that started by recording things together. We were a band that started in a rehearsal room, a garage band. We had the same influences then as now, but then we were just playing in a room and we didn’t put much time in to the studio,” says guitarist and chief lyricist Alex Cameron. “We always looked forward to expanding that, and we now look forward to expanding it even more.”

Formed in 2012, Bad Dreems – vocalist Ben Marwe, bassist James Bartold, guitarist Ali Wells, Cameron, and Wilson – didn’t fit alternative preconceptions: post-punk fans in a time of electronic indie music, they were neither mainstream nor alternative, with an everyday anti-image and Adelaide’s separation adding to their distinct stance. They were celebrated as “outsider rock”, which was both an exaggeration and a different kind of pigeonhole.

“You just never want to be too much like anything else,” Cameron says. “Really, we’ve always just done what we wanted.”

As comfortable with the Triffids and Devo as Eddy Current Suppression Ring and AC/DC, the eclectic ambitions of Doomsday Ballet find their identity through Marwe’s vocals, which switch between reflective croon and feral snarl. He’s so effective at the latter that the protagonists in Cameron’s lyrics are perceived by some as autobiographical. The complainant in single Double Dreaming, whose preferred pronouns are “me, myself, and I”, was quickly queried upon release.

“That is an endless source of frustration,” Cameron says. “Most of the characters that inhabit the songs are a satire, and a criticism of something. They’re not autobiographical. With the line about pronouns, what was intended was that people were so self-absorbed in this day and age that they couldn’t even listen to the feelings of other people and simply address them as they wanted. Somehow that was misconstrued as an attack on people who state their preferred pronouns.”

Cameron – a surgeon by trade, specialising in hands and skin cancers, who relocated to regional Victoria where his skills allowed him a flexible, tour-friendly work schedule – is a songwriter who believes in show as opposed to tell. He doesn’t have the answers to society’s ills that people crave, but he’s determined to make them think through subversive means.

“With this album, given the state of the world, there’s no narrative that makes sense. We tried to reflect that in the lyrics,” Cameron says. “The world is absurd. The fact that Donald Trump is President of the United States is absurd. One of the ways to cope with that as an individual is to be an absurdist.”

Having found a structure that works for them – “we obsess over the band,” says Wilson, an art director, “we don’t obsess over making money from the band” – Bad Dreems have calmly remade their sound while staying true to their blue-collar roots.

“We could dress to fit in with the mould of our political views, but they wouldn’t be authentic and honest,” Cameron says. “A lot of our audience is male and it’s important for them that they can see us as people who have affinity with them as men who share the same interests, but we also won’t stand for anything racist or misogynist. Hopefully that hits home to them.”

Bad Dreems play at the Manning Bar, University of Sydney, Camperdown, on Saturday, October 26; and the Croxton Bandroom, Thornbury, on Friday, November 1.