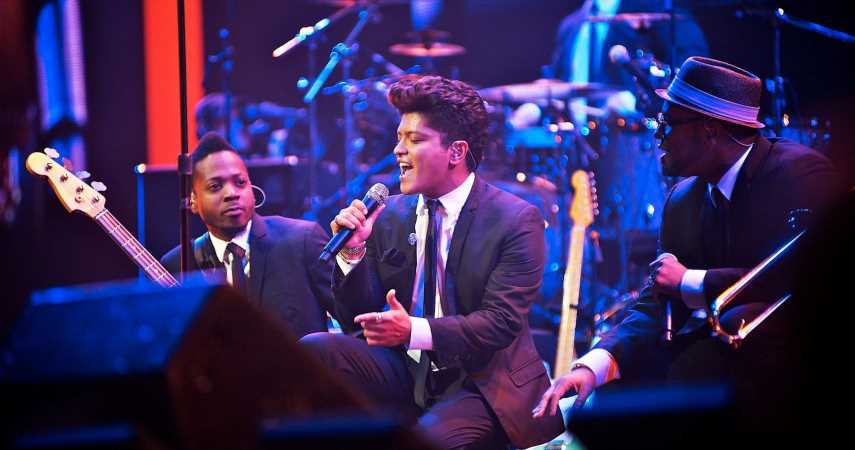 Bruno Mars is known for his retro style, and his unique outfits and looks are enhanced by his .

Bruno Mars has established himself as a versatile singer with music in various genres and released countless hit singles that have topped the charts around the globe. One of the best-selling artists of all time, his album sales and tours have amassed him a $175 million fortune. As an influential figure in the industry, Mars has resurrected the 90s funk-pop genre with his latest albums and won several Grammys for his contribution to music. The singer brings the same flair to his fashion as he approaches styling with an old-school vibe that combines elegance, luxury, and a bit of funk.

From sporting the oldest Nike sneakers in various designs to buying some of the most coveted kicks that are not available for retail purchase, Bruno Mars has a diverse collection of sneakers that he wears during his concerts, casual outings, and music videos. Let’s take a look at some of the sneakers in his collection.

Designed by Bill Bowerman, Nike’s original running shoes, the Cortez was released in 1972. Over the years, it has become a streetwear icon and a common choice for celebrities to wear for comfort. Bruno Mars showed his love for the iconic sneakers when he wore the classic kicks during his 24K Magic World Tour in 2018 and at the 2017 BET Awards, where he performed the opening number and won awards, as stated by Footwear News. The white sneakers owned by Mars have a simple design with a blue Nike Swoosh.

RELATED: The Billion-Dollar Swoosh: Nike’s 10 Most Expensive Endorsements With Athletes

Another old-school sneaker on the list is the Vans High-Top Sneakers. Mars is often spotted wearing comfortable shoes while traveling to destinations during his concerts. He had owned a pair of black Vans sneakers since 2013, when he was first spotted wearing them as he arrived at the LAX Airport. The singer has also shared snaps of himself wearing the sneakers while practicing for his tour and performing acoustic versions of his songs.

Known for his love of Cortez, Bruno Mars brought his style to the sneakers when he was one of the first people to wear the Nike Cortez Ultra Bruno Mars Edition. As mentioned by Sole Collector, it has the same silhouette as the original Cortez and comes in the shade of black with a metallic gold Swoosh. Mars was spotted wearing the sneakers during his Super Bowl Halftime Performance in 2016 alongside Chris Martin and Beyonce. A few months after he wore them, Nike put the shoes on retail sale.

There is a long history of celebrities preferring to wear Converse All-Star sneakers while casually walking down the street or performing at shows. Bruno Mars has been a longtime fan of Converse and is often spotted wearing the All-star black sneakers with a white lace-up pattern. He sported the sneakers at a Karl Lagerfeld cocktail party in 2012 as well as in his 2019 music video Please Me alongside Cardi B.

Ever since the Off White x Nike Air Presto collab designed by Virgil Abloh hit the shelves in late-2017, the sneakers have been off the market and a sought-after piece around the world. Bruno Mars showed off his Off White x Nike Air Presto sneakers at the 2018 Grammys, where he performed Finesse with Cardi B and took home three Grammys in major categories, as noted by GQ. With Mars wearing the sneakers, the resale price of the collab shoes has skyrocketed.

Another Cortez on the list, this Nike sneaker comes in its usual design but with an all-white colorway. Similar to its other shoes, these sneakers have become a streetwear essential. Mars has worn these kicks during his 24K Magic World Tour and while performing at late-night shows. Most notably, he was spotted wearing the All-White sneakers for the music video of his record-breaking single. That’s What I Like, which has over 2 billion views on YouTube.

Bruno Mars brought the flair of the early nineties with his album 24K Magic, which made people nostalgic and brought the funk genre to the mainstream again. While his album did not feature a single artist, he did collaborate with singers for his remixes. One of his most popular music videos was Finesse featuring Cardi B, where they dressed in a complete 90s outfit, including the shoes. According to Yahoo, Mars wore a pair of Reebok Court Victory Pumps used by tennis star Michael Chang in the 90s.

Bruno Mars made his much-awaited return to music in 2021 as a duo called Silk Sonic with Anderson Paak. While working on the album Leave The Door Open, he created a fashion alter-ego Ricky Regal that has collaborated with Lacoste to introduce apparel and accessories designed by him. The stand-out collection has tracksuits, shirts, and eye-catching sneakers that have sold out faster than expected.

Bruno Mars has diversified his portfolio as he has ventured into various businesses, including spirits drinks and styling. With the alter ego Ricky Regal, he has plans to bring retro yet modern fashion to people everywhere. Known for his classic sneaker collection, Bruno Mars does not hesitate to mix his style with some elevator shoes as well.