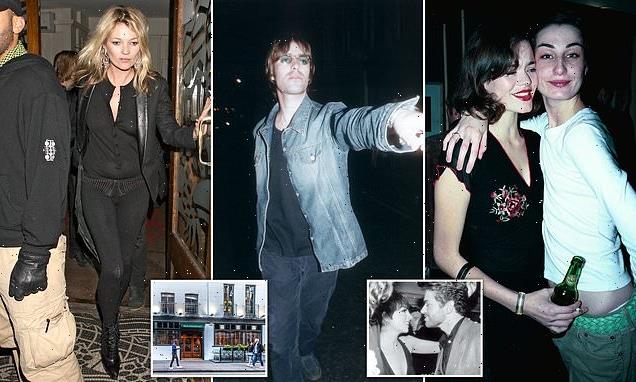 Parties with Kate Moss, royal lunches and PLENTY of late-night naughtiness… as The Groucho Club is sold for £40million, a look at the VERY colourful history of London’s louche private members’ club

The Groucho Club, the louche Soho joint where hard-living artist Damien Hirst once put his £20,000 Turner Prize winnings behind the bar, has been sold in a deal worth £40million.

It marks the latest chapter in the storied history of the star-studded Soho haunt, which has welcomed everyone from Kate Moss to Bill Clinton through its doors at 45 Dean Street.

The Groucho, originally conceived in the 1980s as a bohemian antidote to the stuffiness of traditional private members’ clubs, has changed hands for only the third time in its 37-year history.

Its new owners are Iwan and Manuela Wirth, whose company Artfarm owns the world-renowned contemporary art gallery Hauser & Wirth and venues such as Roth Bar & Grill in Bruton, Somerset.

Mr Venters has promised to returned to the ‘eclectic appeal and maverick ethos’ that appealed to the likes of Queen’s Freddie Mercury and Liza Minnelli. In recent years some members have felt the venue has ‘lost its unique feel’ as it opened its membership up to corporate city types. 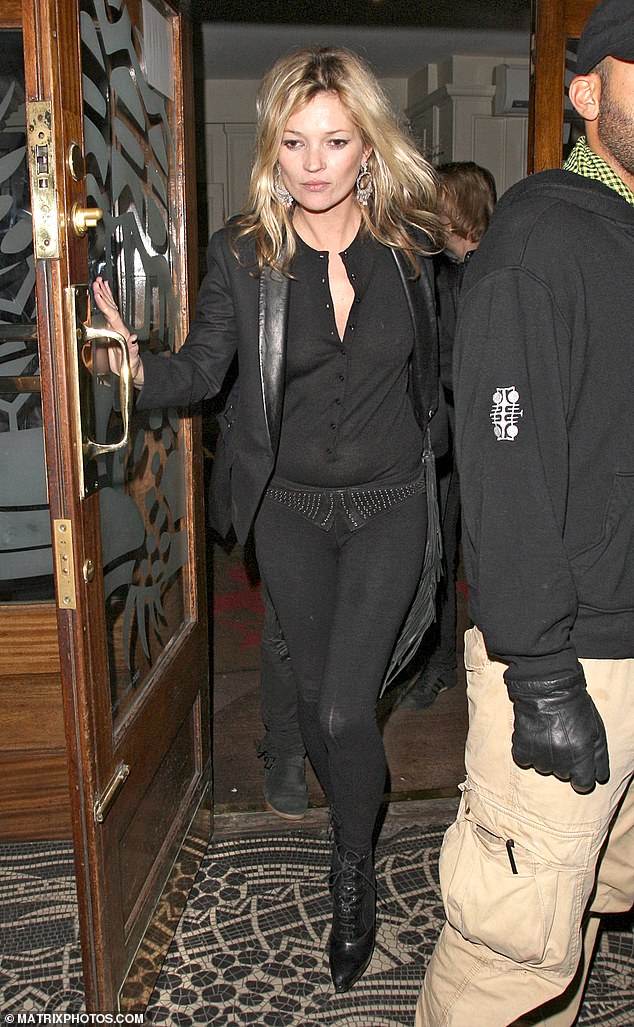 The Groucho Club, the louche Soho joint where hard-living artist Damien Hirst once put his £20,000 Turner Prize winnings behind the bar, has been sold in a deal worth £40million. The club, founded in the 1980s, is a favourite haunt of Kate Moss (pictured in November 2009) 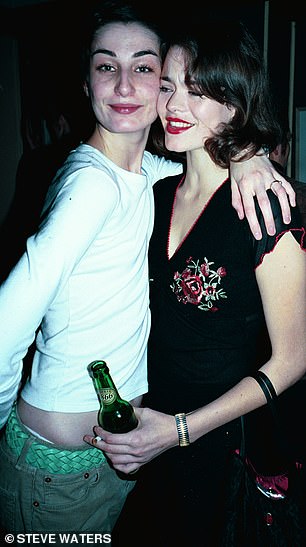 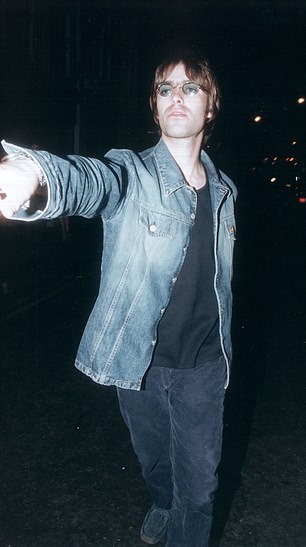 Erin O’connor and Jasmine Guinness at a Models One bash at The Groucho Club in 1999 (left). Right, Liam Gallagher strolling out of the club in 1998 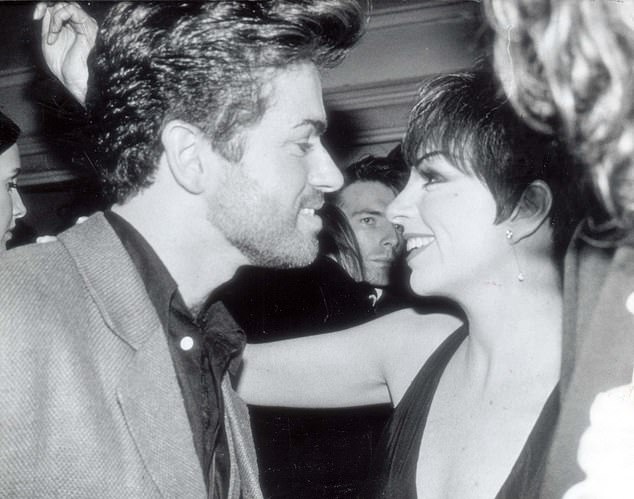 George Michael and Liza Minnelli appeared to hit it off when they met for the first time at The Groucho Club in 1990, just five years after it opened its doors 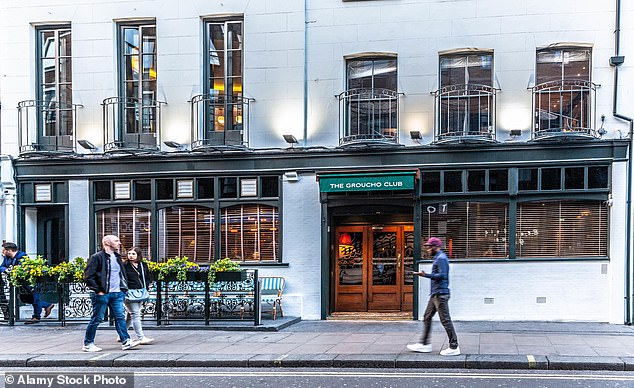 The Groucho, pictured, originally conceived as an antidote to the stuffiness of traditional members’ clubs, has changed hands for only the third time in its 37-year history

The Groucho Club was the brainchild of a group of publishers including Carmen Callil, Ed Victor and Liz Calder and literary agent Michael Sissons, who wanted somewhere comfortable, intimate and stylish to meet, work and socialise.

It was the mid-1980s and while there were a number of long-standing private members’ clubs in the capital, almost all had an elitist, formal feel and very few welcomed women as equal members.

The group, together with Tony Mackintosh, settled on a large, stucco-fronted townhouse in the heart of Soho.

The venue was once Gennaro’s, an Italian restaurant where royalty dined alongside opera stars, but had fallen into disrepair years before it became The Groucho Club in 1984.

According to the official Groucho Club history, there were also ‘tales of dark deeds’ at the building, including a shooting in one of the rooms which is said to be haunted to this day.

The freehold cost £450,000, or the equivalent of roughly £1.2million today, with roughly the same amount spent restoring the rundown building to its former glory. 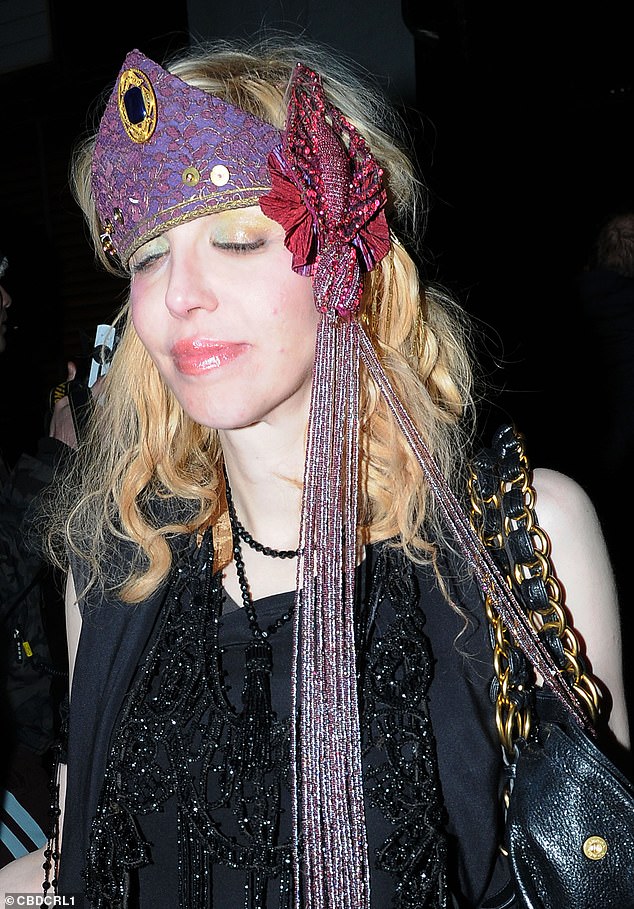 There has been a feeling in recent years that the club has ‘lost its unique feel’, which had once so appealed to the likes of Queen’s Freddie Mercury and Liza Minnelli, and hosted Bob Geldof’s stag party. Pictured, Courtney Love leaves The Groucho Club after a night out in 2009

Lily Allen, left in 2008, and Sienna Miller, right in 2005, are among the famous faces who have partied in The Groucho Club over the decades 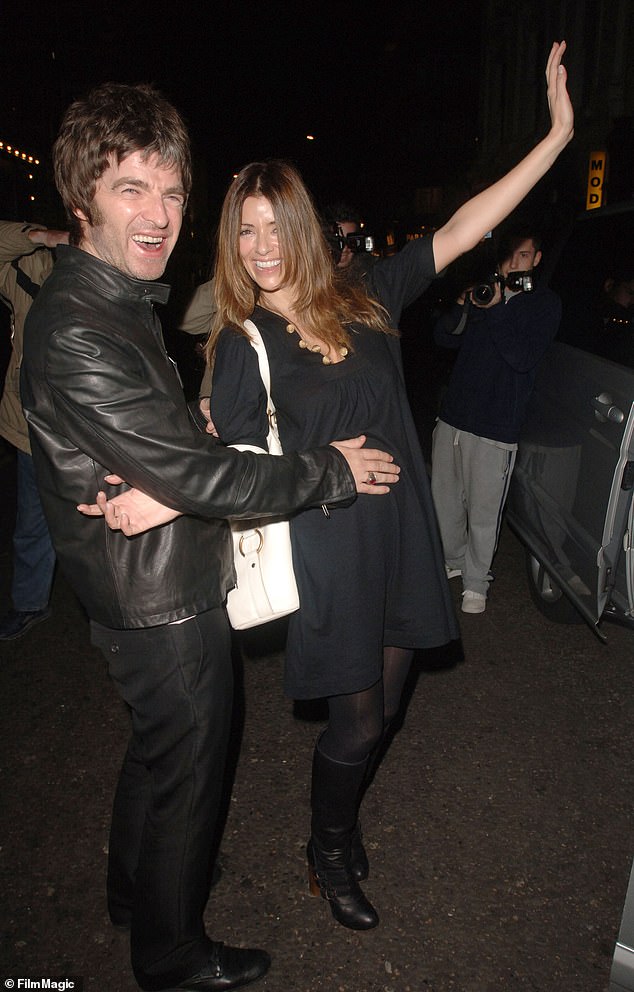 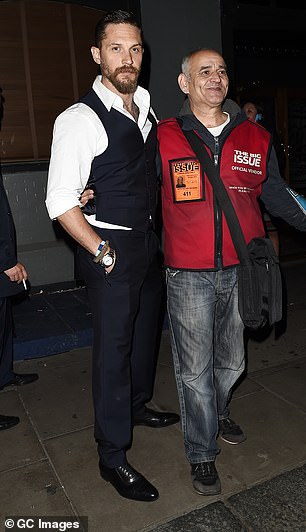 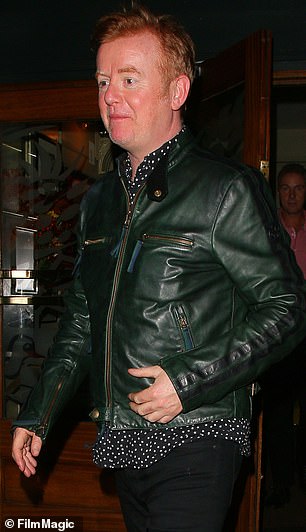 Actor Tom Hardy arrives at The Groucho Club in 2015. Right, Chris Evans in 2013. There is a feeling among some members that the venue has lost its spark in recent years 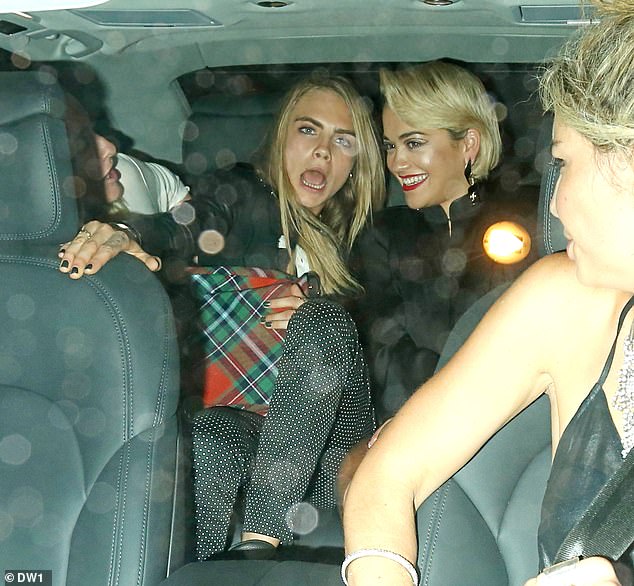 Celebrity pals Rita Ora, Cara Delevingne and Ellie Goulding pile into a car following a night out in The Groucho Club in 2013 before stopping off for a McDonald’s takeaway in 2013

After initially struggling to find investment, the club was eventually funded by a group of some 400 publishers, artists and media types.

‘It was a great moment as we knew we could go ahead and create the dream we had laid out in the prospectus,’ Mackintosh once said.

The prospectus, which included cartoons by Quentin Blake, presented a vision for an all-day drinking and dining establishment open to men and women where there would be a bar, restaurant and eventually bedrooms.

The Groucho Club opened its doors on May 5, 1985 and, after a slow start, the number of membership applications soon grew.

‘The Membership Committee was formed and selection was decided by simple ‘rules’,’ the official history of The Groucho Club explains. 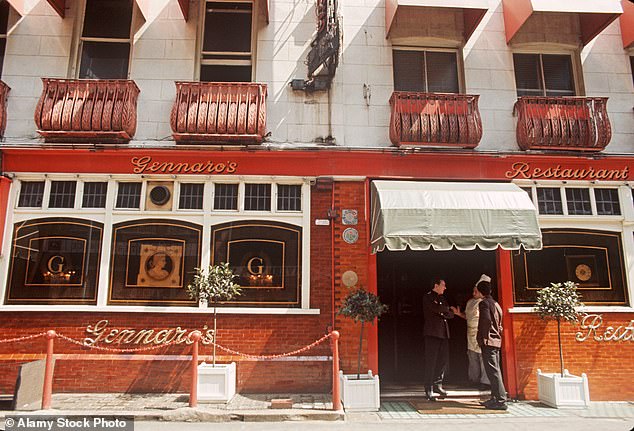 The venue of The Groucho Club was once Gennaro’s, pictured, an Italian restaurant where royalty dined alongside opera stars, but had fallen into disrepair 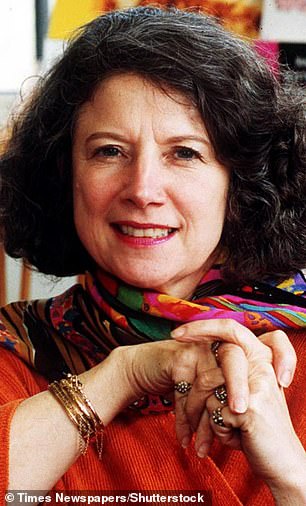 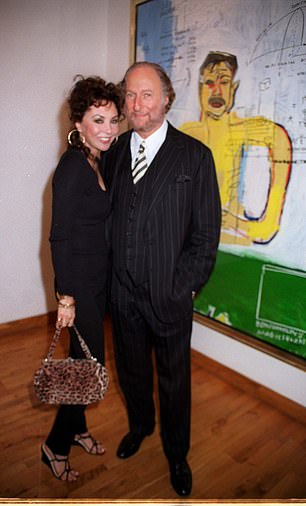 The Groucho Club was the brainchild of a group of publishers including Carmen Callil, left, Ed Victor (right with Marie Helvin) and Liz Calder and literary agent Michael Sissons, who wanted somewhere comfortable, intimate and stylish to meet, work and socialise. 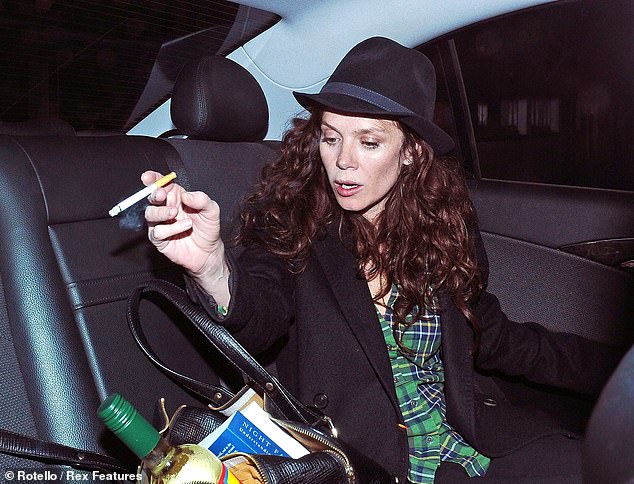 ‘The applicant would have to be proposed and seconded by two members ‘in good standing’. The other being; does anyone know this person and would you like them sitting next to you at the bar?

‘The membership committee quickly established itself as fearsome, fickle and notoriously difficult to impress.

‘Even if you got through the gauntlet of membership it didn’t always guarantee actually getting in to the club: Eric Clapton, who was a member in good standing, was turned away at reception unrecognised, and celebrity alone didn’t make an impression as the Spice Girls at their height of fame were unsuccessful.’

By the 1990s, The Groucho Club had established itself as the place to be seen.

It was frequented by writers such as Julie Burchill and Toby Young, who once had a tryst with a Princess Diana lookalike in the club’s lavatories, and was a favourite of the Rule Britannia set and the YBAs. 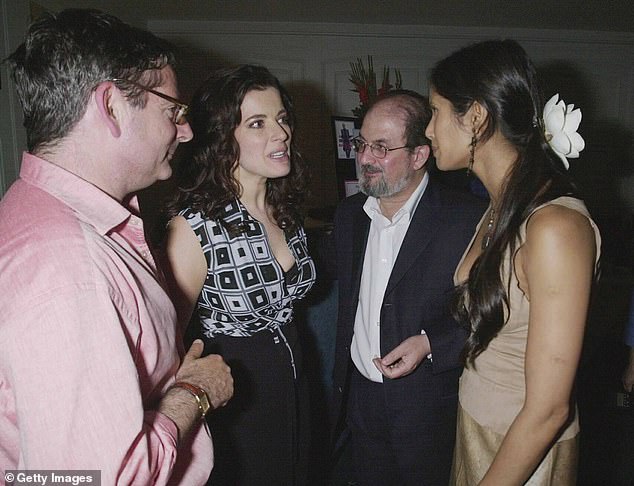 Socialite and model Annabelle Neilson with British model, musician and DJ Mary Charteris at The Groucho Club in 2013. Right, The Rolling Stones’ Ronnie Wood at The Groucho in 2008 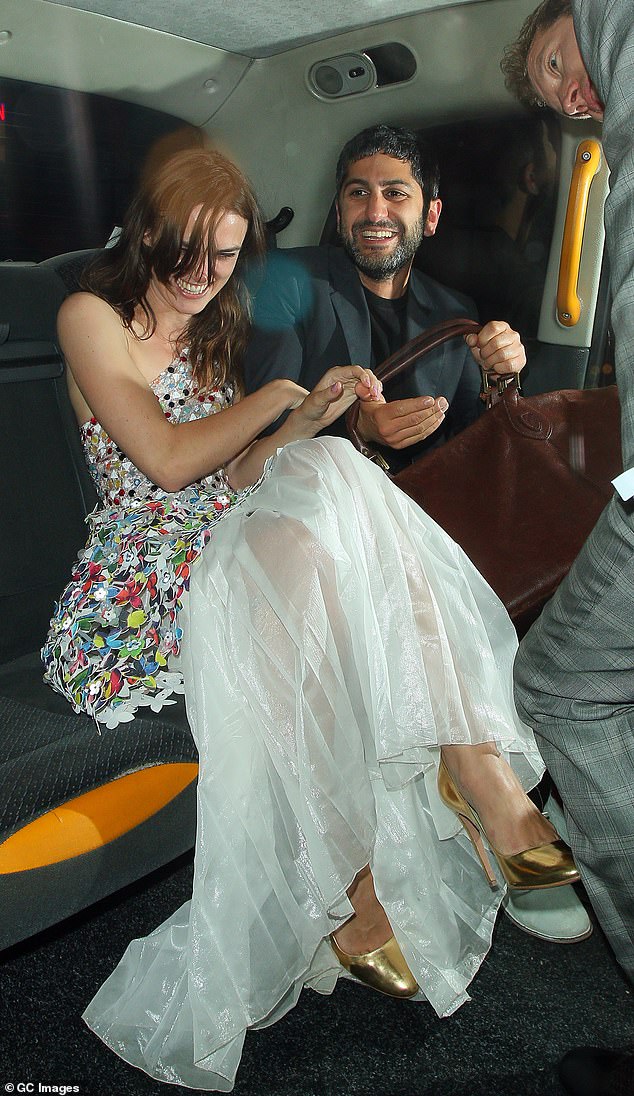 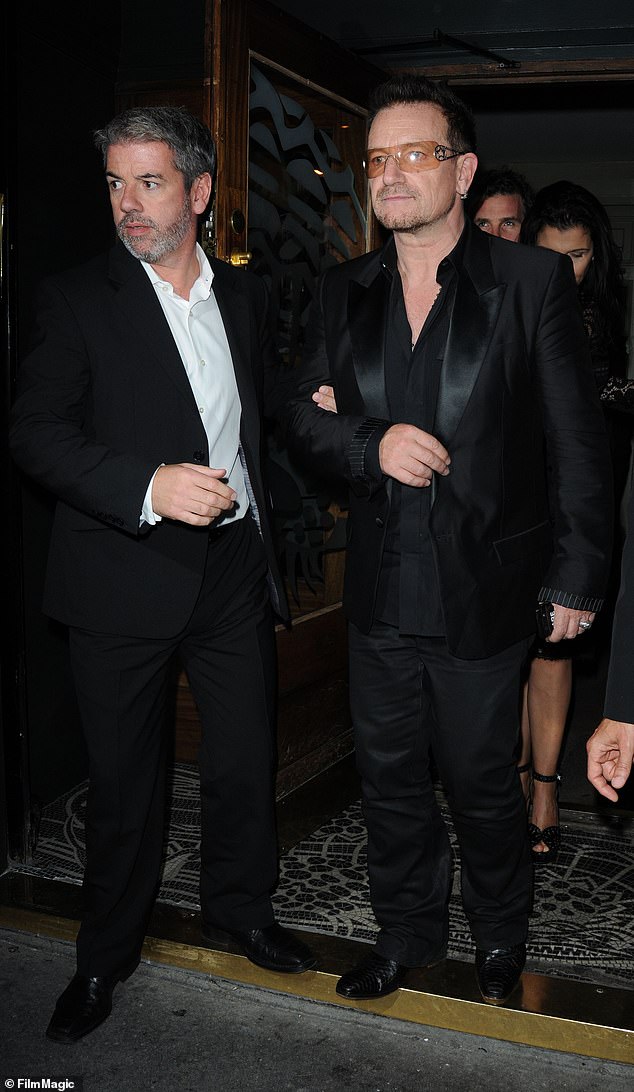 Bono looks serious as he leaves The Groucho Club in September 2011. Several years later there were complaints from guests after the club changed hands

At the centre of the action was Bernie Katz, the Groucho’s long-time front-of-house manager who was described as a ‘fixer without equal’, a ‘keeper of secrets’, and a confidant of stars including Stephen Fry, Kate Moss and Jude Law, who gave the eulogy at his 2017 funeral.

Katz orchestrated hell-raising nights for Kate Moss and once deposited boozy writer Jeffrey Bernard back home in a wheelchair. 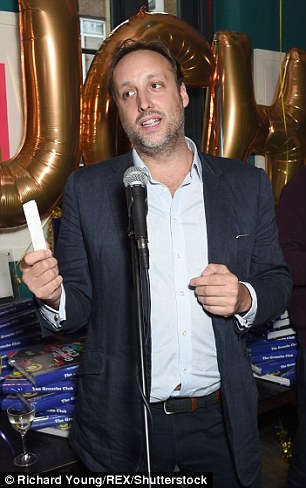 A-listers praised his discretion and all members appreciated the way he made everyone feel important.

‘It’s not our job to say no,’ Bernie once said in an interview. ‘You always start with a positive. Our job is ‘yes’, you can have whatever you want.’

Katz’s extraordinary life – and tragic demise – was traced in a BBC podcast that described the club’s hedonistic heyday.

When The Groucho was at its fashionable, cocaine-fuelled ­zenith, the upstairs snooker room was widely known as the ‘Peruvian ­Procurement Department’, podcast host and journalist Mark Edmonds claimed.

Among the high profile members he befriended were Tracey Emin and Damien Hirst.

In return for ‘favours’, Bernie had been given art worth ‘well in excess of six figures’ by Groucho Club members, according to Edmonds.

Yet by the mid 2010s, the feeling at The Groucho Club had started to change.

A majority stake in the Groucho was bought for around £40 million by Caffe Nero owner Alcuin Capital in 2015. From 2001 until 2006, it had been owned by a conglomerate fronted by chocolate heir Joel Cadbury, who sold it to City firm Graphite Capital. 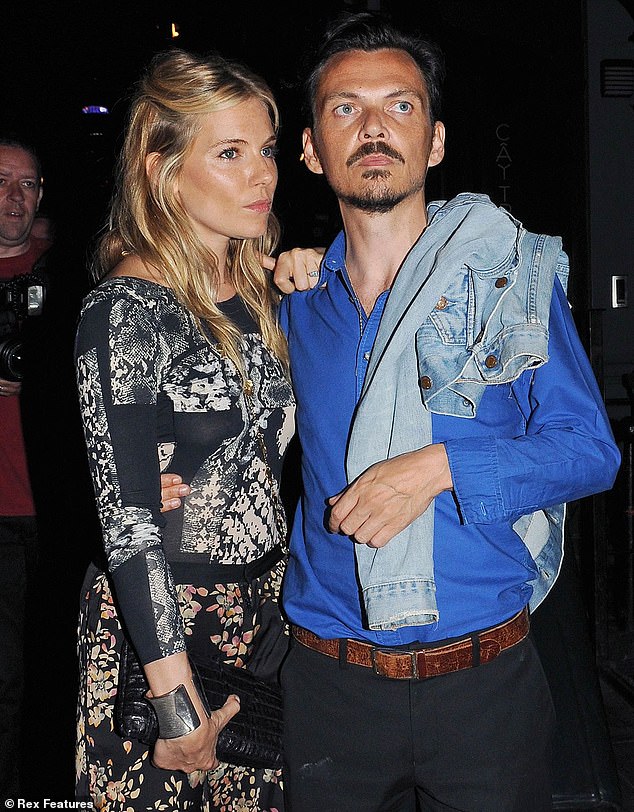 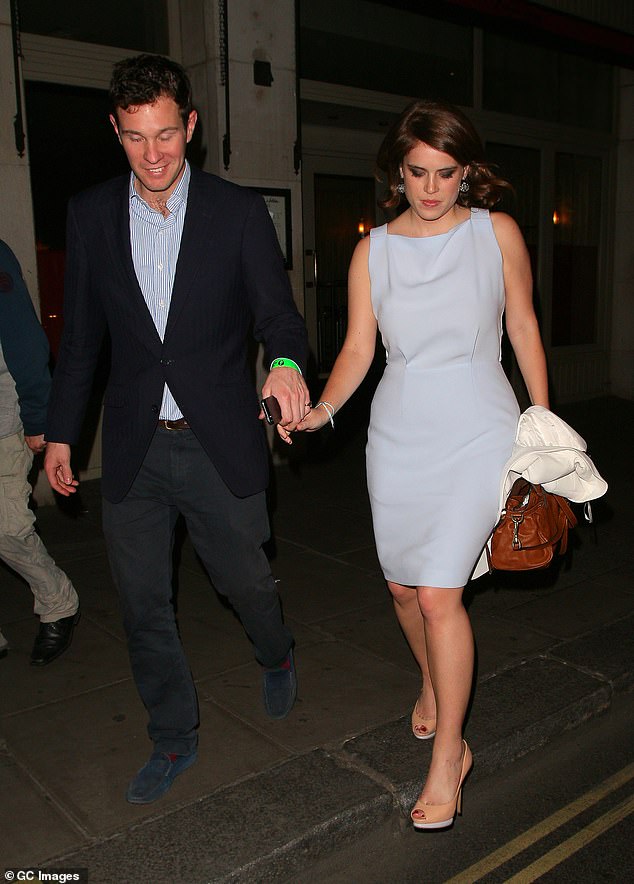 Jack Brooksbank and Princess Eugenie leave The Groucho Club in 2014. Royals including Princess Diana are said to have visited the club 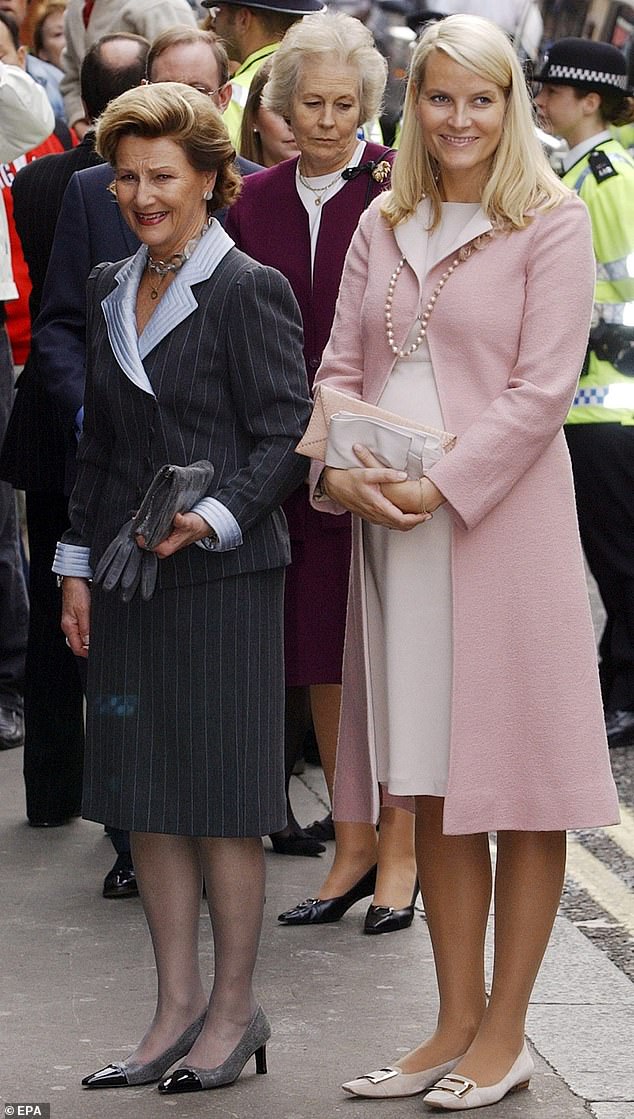 Queen Sonja, of Norway, left, and Crown Princess Mette-Marit smile as they arrive for lunch at the Groucho Club in October 2005

They included an allegation of ‘an increase in open drug-taking’ by various members and their guests, and argued that the club had ‘lost its unique feel’.

‘Perhaps as a result of managerial changes within the club (and the resulting disarray), there is now an increase in open drug-taking in the toilets — such as using the sink areas in full view — which some members are very angry about,’ the letter claimed.

‘The club appears to be over-subscribed, and new members don’t seem to necessarily come from the traditional media/arts background,’ it continued.

‘When the club membership becomes over-subscribed or too corporate, it smacks of the club needing money.’

Mr Hobbs said at the time: ‘We have a zero-tolerance attitude on drug-taking, and I am not aware of anyone flouting the club’s rules.’

The rot deepened — so detractors allege — in early 2017 with Katz’s retirement after 27 years. Five months later he was found hanged at his rented flat in north London at the age of 49.

His devotees claimed that the Groucho’s spirit was extinguished with him.

‘He appeared crazy but actually was very professional — the consummate host,’ one told the Daily Mail’s Sebastian Shakespeare.

That year the club had announced a 40 per cent increase in its membership fee. 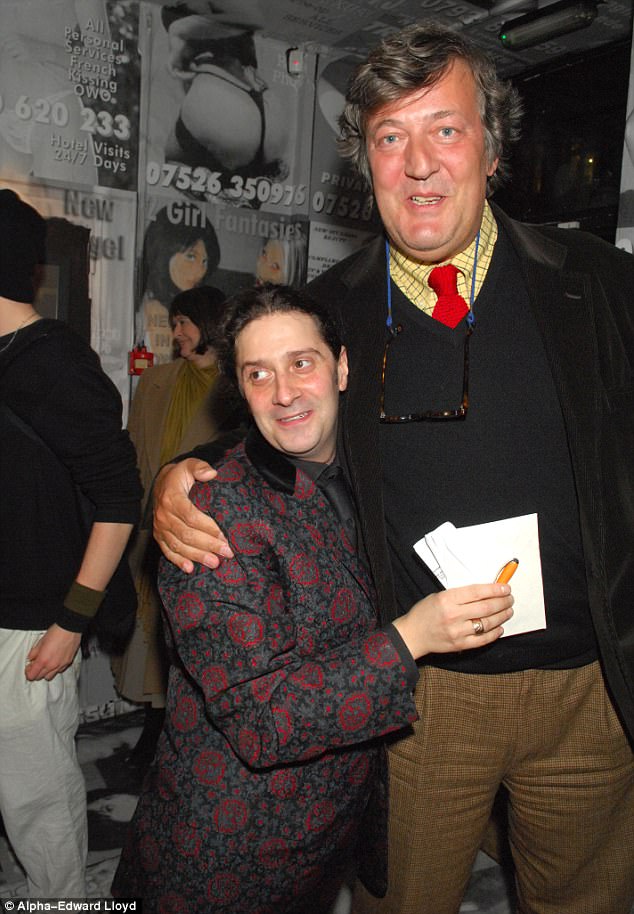 At the centre of the action was Bernie Katz, the Groucho’s long-time front-of-house manager who was described as a ‘fixer without equal’, a ‘keeper of secrets’, and a confidant of stars including Stephen Fry, Kate Moss and Jude Law, who gave the eulogy at his 2017 funeral. Pictured, Katz and Fry in 2008 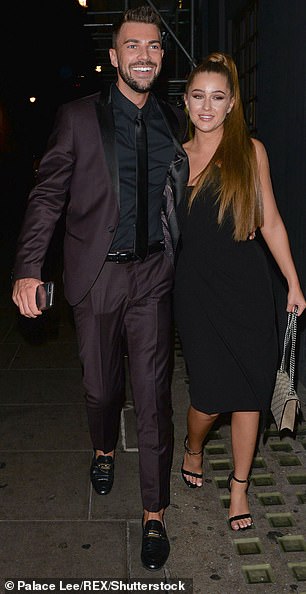 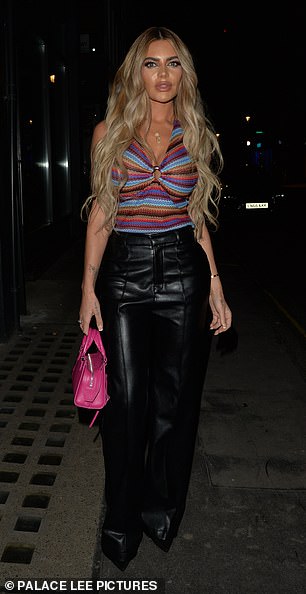 Now Artfarm is hoping to turn the tide at the iconic venue, which has recently hosted reality TV stars and younger influencers. Pictured, Sam Bird and Georgia Steel in 2018 (left) and Megan Barton-Hanson in January 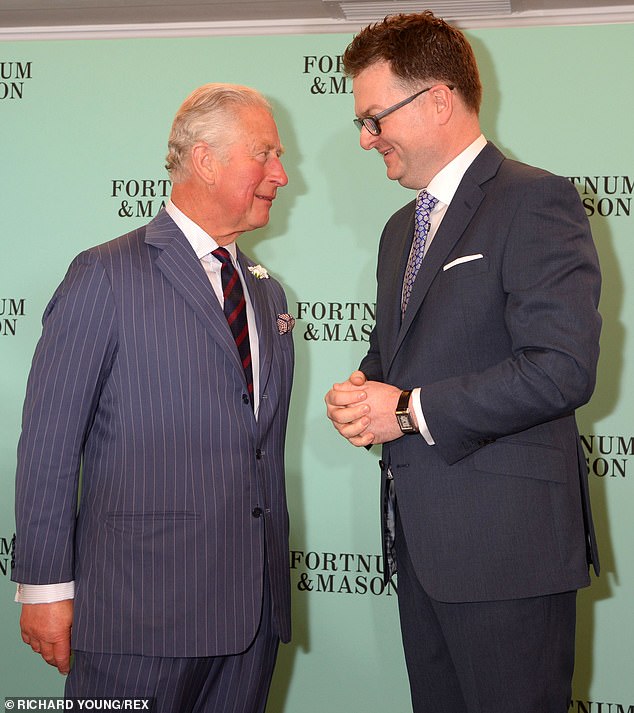 Months later Mr Hobbs abruptly stepped down as general manager amid much speculation.

‘I think Matt just got to the end of his tether,’ a source told Sebastian Shakespeare at the time. ‘You can imagine what running the bloody Groucho Club is like. It’s a really exhausting job.’

Now Artfarm is hoping to turn the tide at the iconic venue, which has recently hosted reality TV stars and younger influencers.

Mr Venters, who regularly met the royals when he was chief executive of Fortnum & Mason, said: ‘As a member for some time myself, I understand the special place the Groucho occupies in London’s cultural landscape.

‘Under Artfarm’s ownership, the future of the club is assured.

‘We will respect the history and traditions of the club, and we look forward to engaging with its membership to create a long-term future for the Groucho that builds on its eclectic appeal and maverick ethos.’