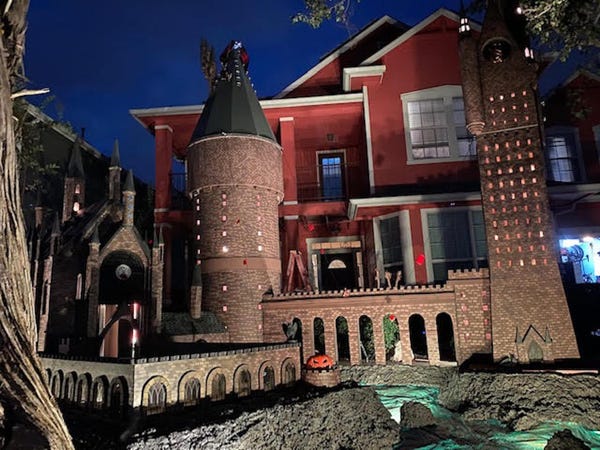 The Pace family has been transforming their yard in Austin, Texas, into an ode to the "Harry Potter" series for Halloween since 2017. 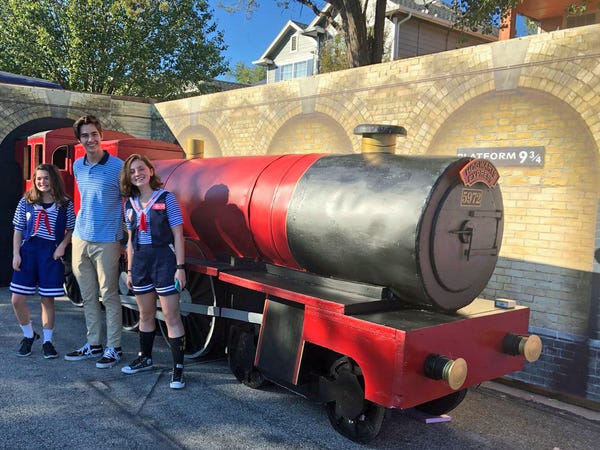 Joel Pace made his first replica from the "Harry Potter" universe in 2017 in an effort to cheer up his wife Amanda, who was undergoing treatment for cancer at the time. It worked, and Joel and his son decided to build more pieces, which drew attention from their neighbors.

The display grew from there, leading the Paces to create an immersive experience in 2018 and 2019 that allowed visitors to walk through a replica of Diagon Alley.

Thousands of people visit the elaborate display each year.

But they realized their interactive experience wouldn't work for 2020. 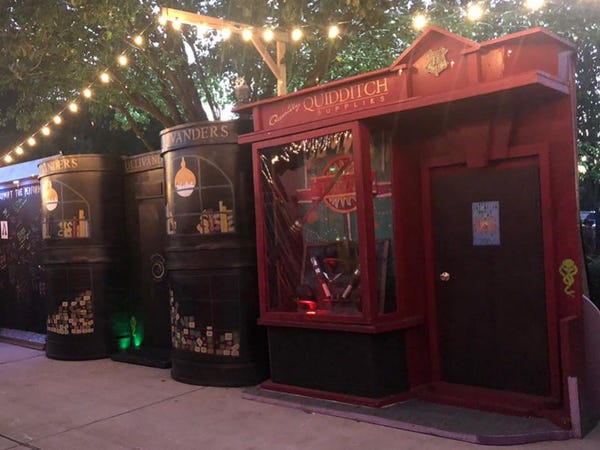 Because the family's display is set up for people to walk through in groups, it wouldn't be safe for "Harry Potter" fans amid the coronavirus pandemic.

"Our usual display had to be abandoned and completely reimagined this year because of the pandemic," Joel told Insider. "We could not host an immersive experience that might put our volunteers and community in jeopardy."

But the Paces still wanted to keep up the Halloween spirit and find a safe way to celebrate with their community.

Joel decided to create a replica of the Hogwarts castle that the community could see from the street. 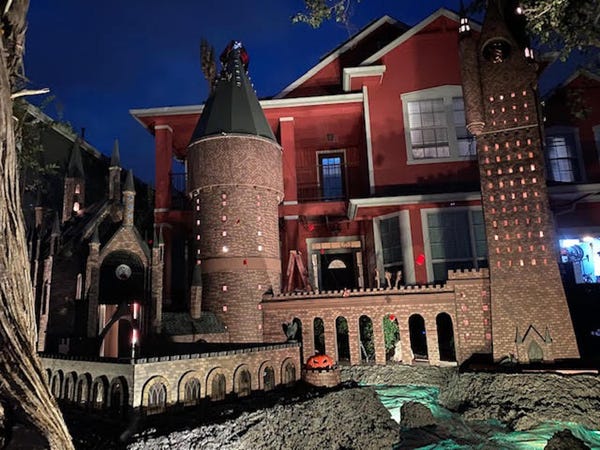 "We have created a yard display that people can enjoy as they drive by our home, much like an elaborate Christmas light display," Joel said. "By doing this, there is no need for interaction with volunteers, but still a little bit of magic for our community."

He added: "The only other option was to go completely dark this year with no display at all, and we thought that people could really use a little lift right now with all that is going on."

They made the Hogwarts castle the focus of the display, building it on a scale that would be impressive even from a distance.

"We decided that it had to be something grand," Joel said of why the castle was the right choice for the display. 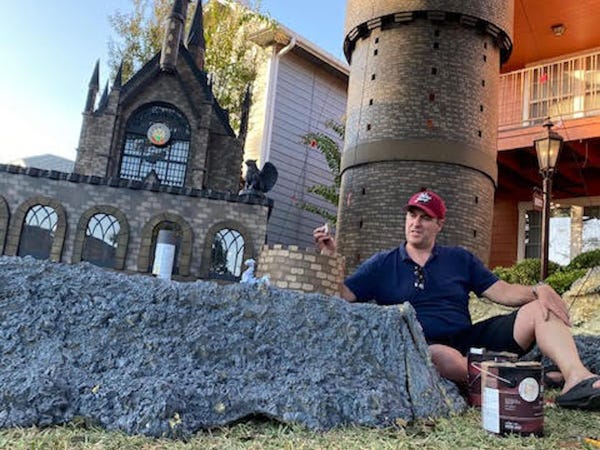 The display features the Great Hall, the grand staircase, and the Astronomy tower, immediately invoking some of the most recognizable scenes from the "Harry Potter" series.

The towers are massive, ranging from 15 to 16 feet in height.

The family set up festive signs that encouraged people to keep their distance both during construction and when they came to see the finished product. 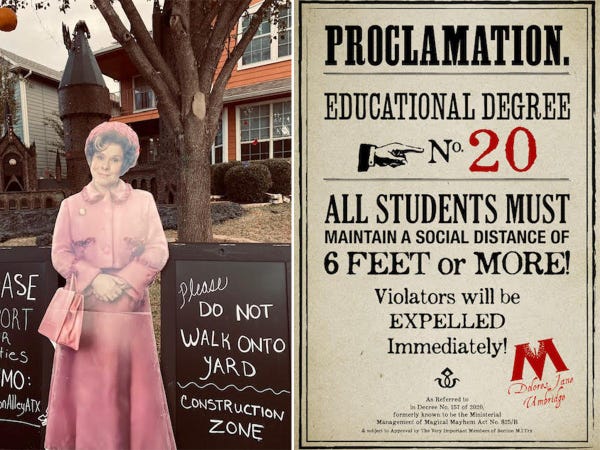 "To keep it safe, we are not allowing anyone on our property or to come close to the display," Joel said, explaining that it's a drive-by display people will observe from the street.

The Paces are anticipating people will get out of their cars to look for longer periods of time, so they set up spacing markers on the street to keep people 6 feet apart, and themed signs that encourage social distancing and masks.

For instance, they set up a cutout of Professor Umbridge to keep visitors out of the yard, and a replica of one of her proclamations from "Harry Potter and the Half-Blood Prince" notes that all students must maintain a social distance.

The base of the display is a wood platform. 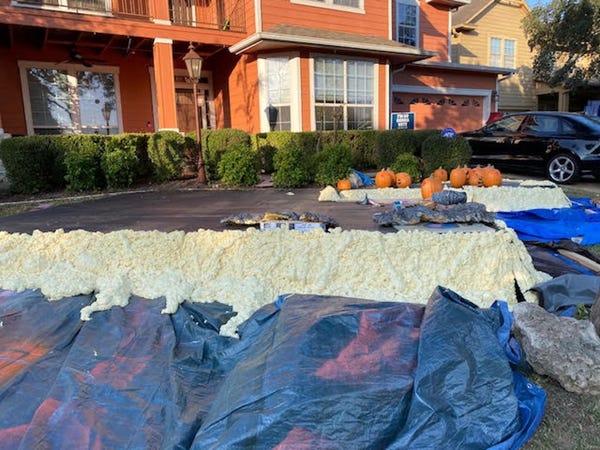 Jim Colliard, who owns a construction company in the Paces' area, helped Joel build the base.

Joel also wanted to create a rocky effect at the base of the castle. He used spray foam that he shaped to look like rocks with spatulas.

After they dried, they were painted a gray color to make them look realistic.

Joel used insulation board to make the majority of the display. 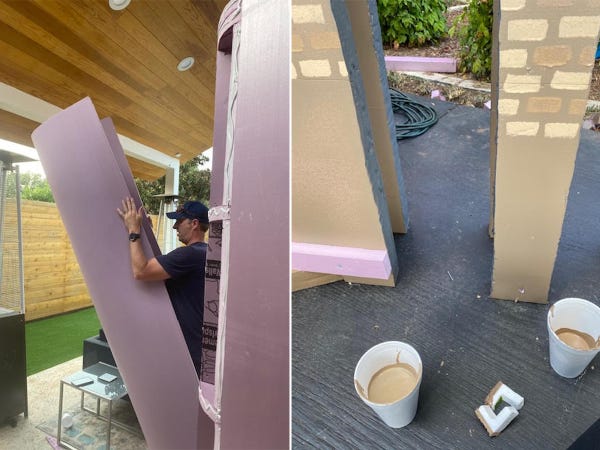 "Over the years, Joel has learned how to bend, manipulate, and construct most of the display with this material," Amanda told Insider. "He's learned which types of paint he can use on the foam, and which he can't."

For instance, spray paint makes the foam disintegrate. The boards make up the flat edges and towers in the finished castle.

Bricks were hand-stamped onto all of the structures. 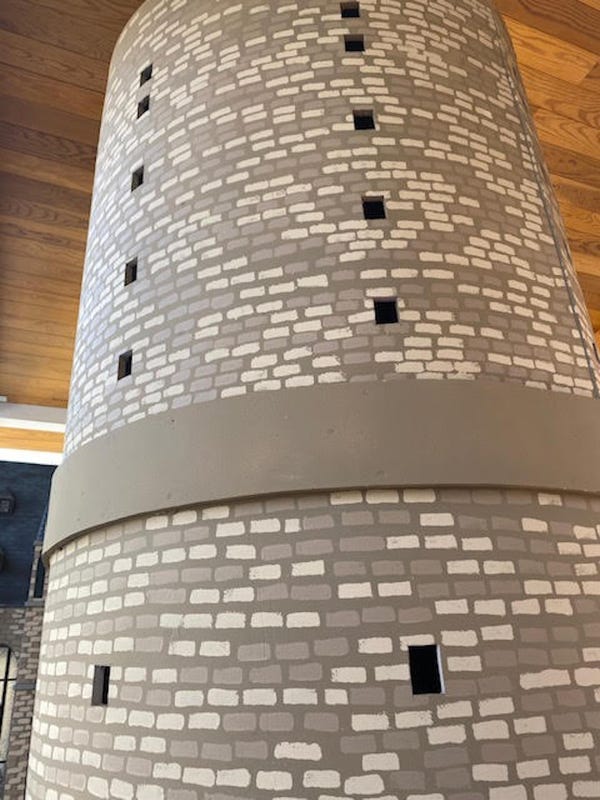 The Paces told Insider that hand-stamping the bricks was time-consuming, with the staircase tower taking several days to finish.

Joel also decided to build the lake that surrounds Hogwarts into the display. 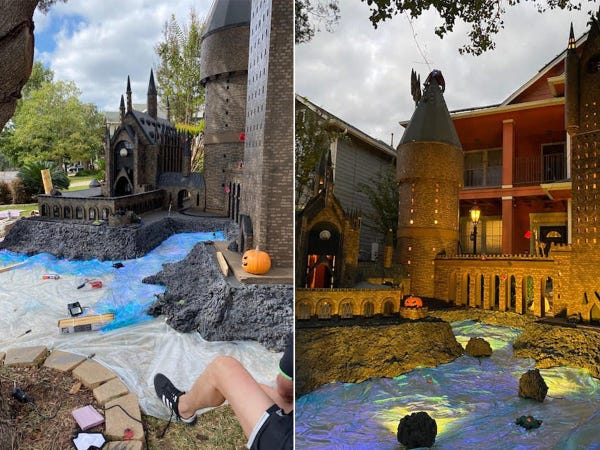 A clear tarp serves as the base for the water, and Joel then covered it with a blue wrap that created a water-like effect.

There's also a lifelike dragon on the staircase tower. 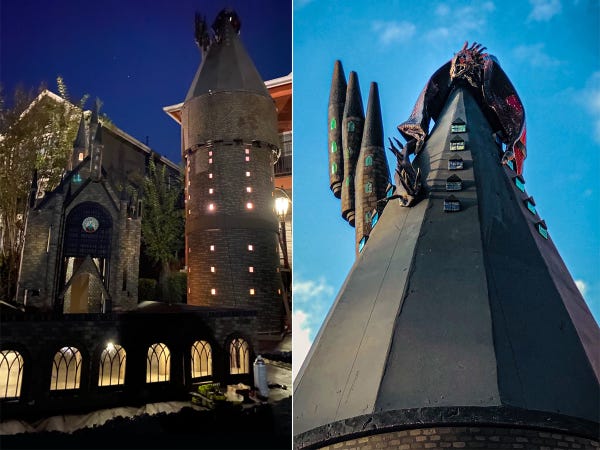 Each of the towers has specific details on it. The dragon claws the top of the staircase tower.

Joel told Insider his favorite feature of the castle is the Astronomy tower because of its details and the lighting on it.

The display is also filled with mood lighting and fog machines to give it a magical feel. 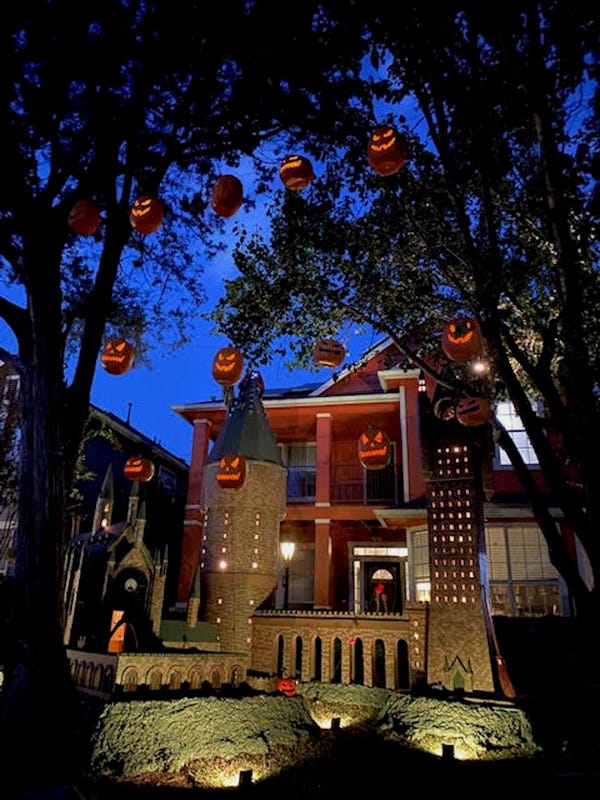 Floating jack-o'-lanterns and candles give the castle a Halloween vibe.

"We also have a small Hogwarts Express train in the display, and we hope to have it making regular runs," Joel said.

The display is designed to be dynamic as people look at it, providing the same kind of fun as an immersive experience.

The Paces also commissioned a 17-foot mural of characters from the "Harry Potter" series in their driveway. 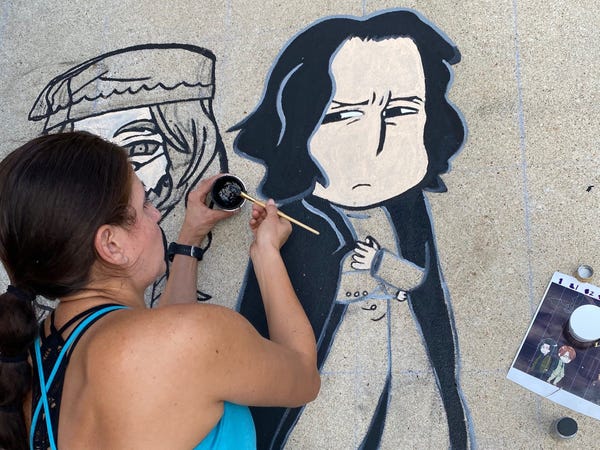 Accidental Chalk Artist and The Izzys worked together to create the stunning mural.

"It's been amazing to watch them work, and the final product is just jaw-dropping," Joel said of the mural. 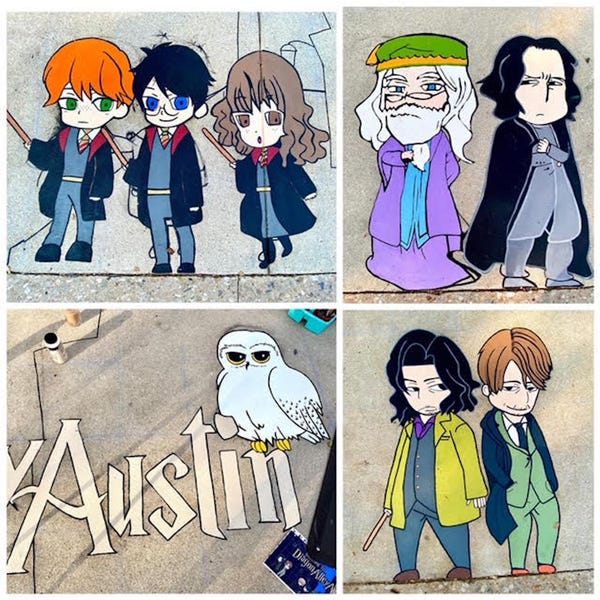 The mural is made up of cartoon versions of famous characters from the series, ranging from Harry Potter to Hedwig the owl.

"We've all had a very difficult 2020, and this project injects a welcome dose of normal, happy, and brightness," Joel said of this year's display. 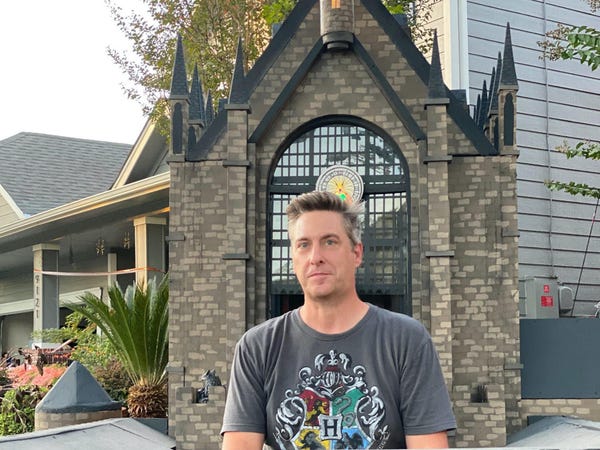 "We need to know that not everything has changed," he said. He thinks that even the sight of him building in the yard is comforting to his neighbors, as it provides a sense of normalcy.

"We also need to sometimes be reminded that even in difficult times, there is always someone that has it worse than we do," he added, as the Paces' display raises money for three charities: Foster Angels, Variety, and ZACH.

"We want to remind everyone that we, as a community, need to rally behind these wonderful charities and help support these kids," Joel said.

The Paces are taking donations for the charities on Venmo at @DiagonAlleyAtx and GoFundMe.

The Paces are planning to leave their display up through November. 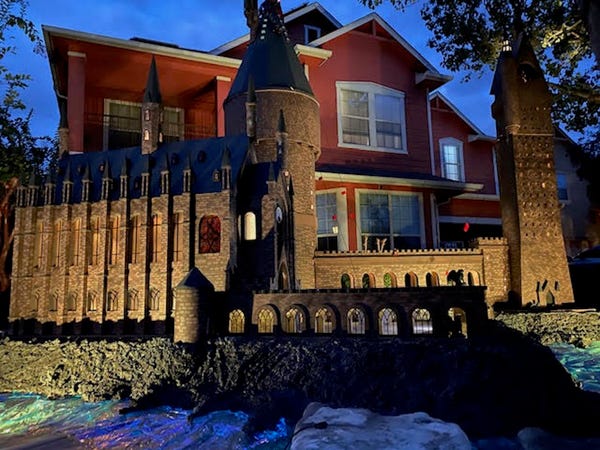 They also plan to make the Hogwarts castle a permanent part of their Halloween display in the future.

"There is an infinite number of ways to decorate and enjoy the holidays without a lot of risky behavior," Joel said. 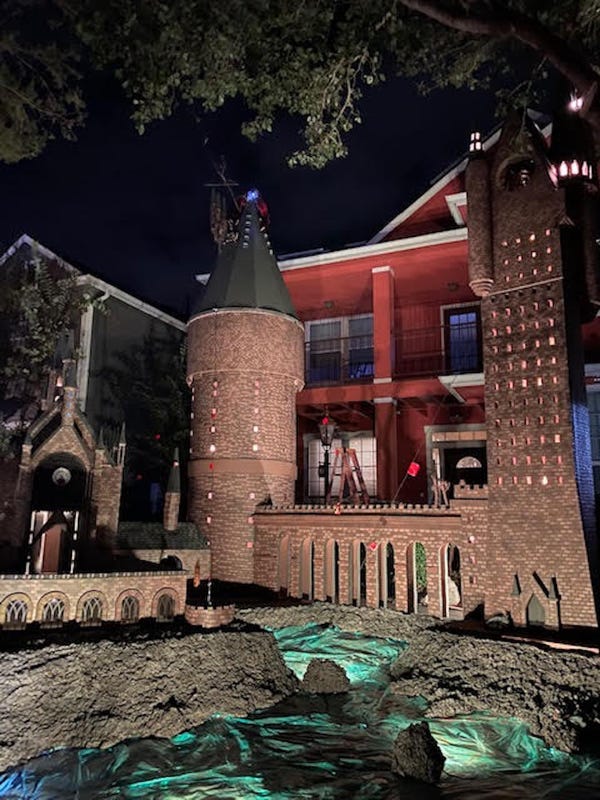 "First and foremost, always be safe and practice social distancing and wear a mask," he said. "Beyond that, just use your imagination."

You can see more of the Paces' display on Instagram.