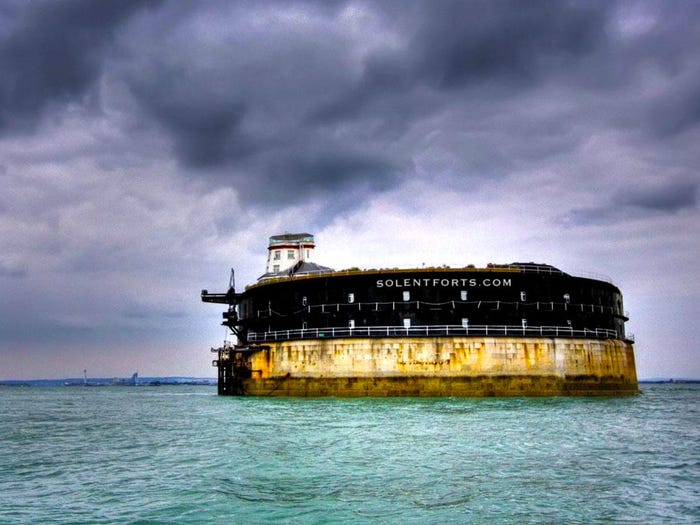 Located a few miles off the coast of England's Portsmouth and the Isle of Wight are three sea forts that would be the envy of any Bond villain.

Spitbank Fort, No Man's fort, and Horse Sands Fort are currently on the market for between $980,000 and $5.5 million each. All built at the same time, Spitbank and No Man's Forts are now popular luxury hotels, while Horse Sands is yet to be renovated.

Collectively known as the Solent Forts, the nautical landmarks can be traced back to over 160 years ago when they were built to protect the UK from the threat of invasion from France led by Napoleon III. Commissioned by Prime Minister Lord Palmerston, the forts took 15 years to build — by which time the threat no longer existed and there was no use for them.

Later used as military holdings and communication points during World War I and World War II, in the 1980s the Solent Forts were then purchased and used as everything from museums to the locations of various raves and British television shows.

In recent years, all three forts were purchased by UK-based investment company Clarenco who converted two of them to their current forms. Clarenco's chairman, Mike Clare, bought Spitbank Fort in 2009 with renovations starting in 2010. No Man's Fort was purchased the same year, followed by Horse Sands Fort in 2012.

Now the forts are looking for a new owner. Here's a look at what each one is like inside.

Spitbank Fort is the epitome of nautical luxury and boasts 33,000 square feet over three floors. 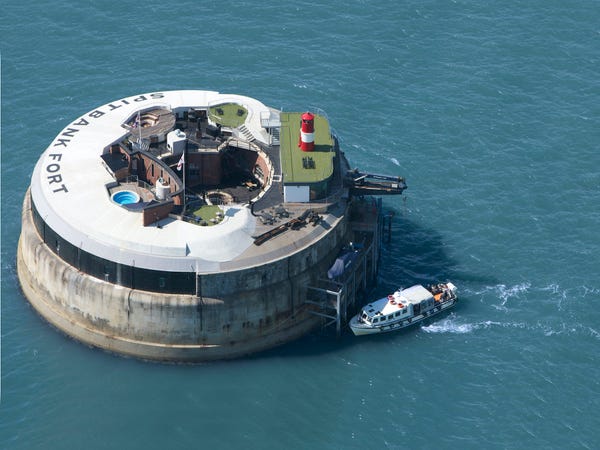 "I just thought it looked amazing," he told Insider. The fort was actually going to auction, so Clare put in a private offer ahead of it and became the proud owner of Spitbank Fort.

Clare then purchased No Man's Fort the same year, and Horse Sands Fort in 2012.

Clare bought Spitbank Fort 24 hours before it was due to go to auction.

When Clare first bought the forts, he knew that he loved them, but had "no real idea" as to what he was going to do with them, though he could see "they had some potential anyway."

He had ideas of everything from a casino to a hotel and spa, as well as a private residence — all possibilities that could still happen for the new owners.

There are nine bedroom suites, a sauna, a hot-pool, and a wine cave. 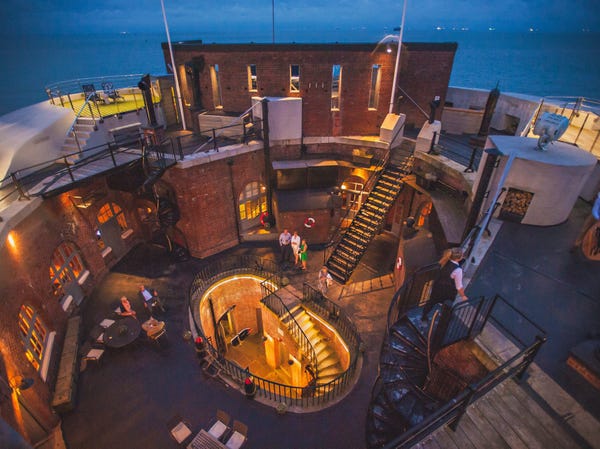 Originally, the fort's clientele was that of a "marine yacht club" that would allow for people to have exclusive access for weddings, anniversaries, and private parties.

Clare said that in recent years the forts have become like a hotel. However, it has been a challenge for him because with that comes the task of having to get guests out there as well as staff and vital resources that keep the forts running.

The properties recently received permission to become private residencies which Clare said have piqued interest. "We've had a lot of people who have been interested in having them as a residence," he said.

Each bedroom is furnished in a different way and all have "quirky" aspects. 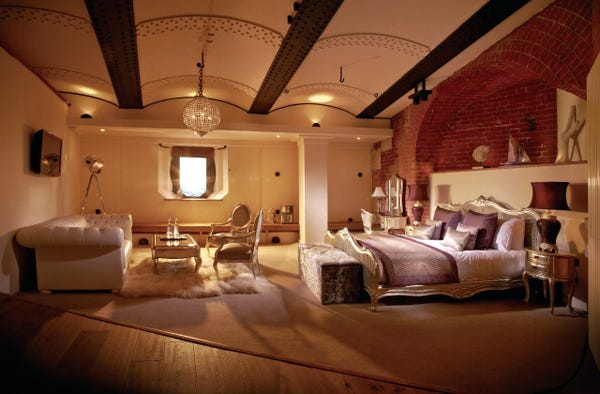 The current bedrooms are converted gun rooms. Some rooms even have empty shells that have left holes in the floor and could easily have been covered up completely. However, every aspect of this historical monument has been kept.

"People can use a fishing rod and fish from within their bedrooms," he said, adding that many of them have actually caught fish.

Spitbank Fort also has a lighthouse that you can sleep in, and the view is incredible. 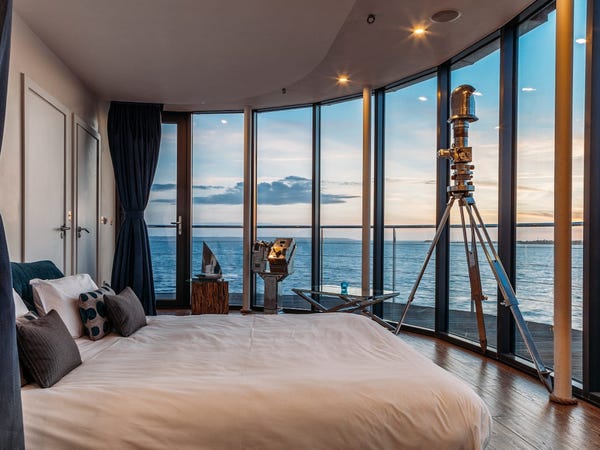 One guest described the place as "perfect" on TripAdvisor, while others said it was "unique," noting that its 160 plus years of history added to the experience.

The fort also has its own bar named the Victory Bar. 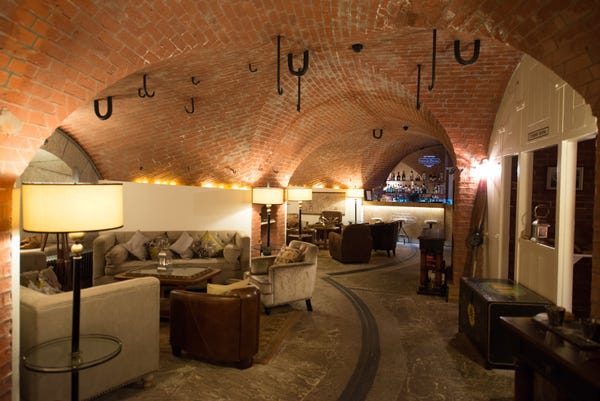 The forts also have a signature cocktail, Solent Breeze, which guests can learn how to mix themselves.

There are also kitchens and a dining area where guests can enjoy meals. 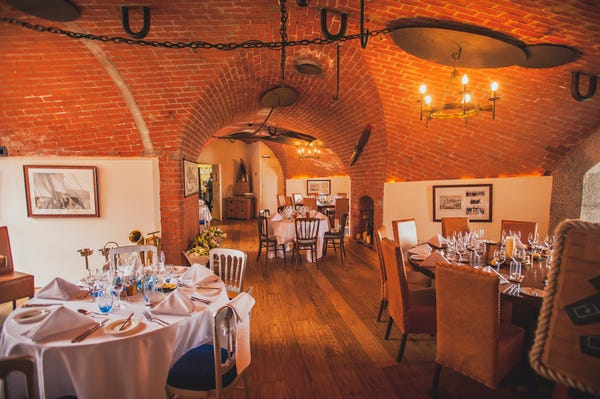 Before the UK lockdown in March, Clare used to host a monthly charity lunch.

Spitbank Fort is currently on the market for $5.2 million and has the potential to be anything. 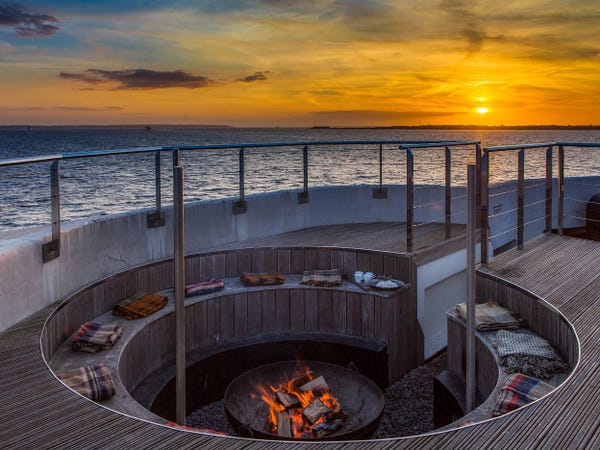 Clare once had the idea of including an "unusual nightclub" on the forts. "It has lots of different levels and different floors. It's very unique," he said. 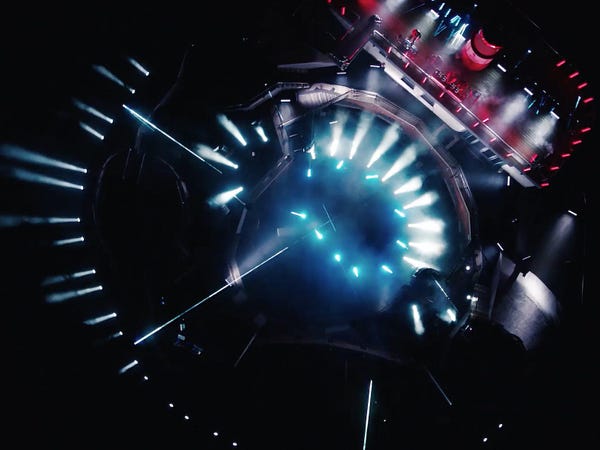 You can watch the performance here.

This is No Man's Fort, home to 23 ensuite bedrooms, crew quarters, multiple bars and restaurants, and room to spare — all for $5.5 million 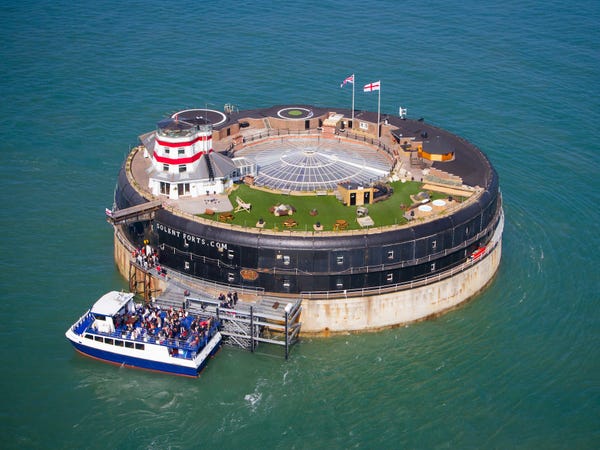 Renovating both forts was quite the task. Clare said: "We spent a few million doing them up and it took two to three years for the renovations."

The main issue he found was getting everything over there as "it was very logistical."

"I mean, we had full-size pool tables and things like that and it's very difficult. Even just things like blinds and bathroom fittings. You had to get the staff to be able to organize something like this," he said.

People working on the forts would often need to stay over to complete renovations and as a result, some of the first work to be completed was the bedrooms.

Much bigger than its siblings, this fort even has a hair salon and barbershop. 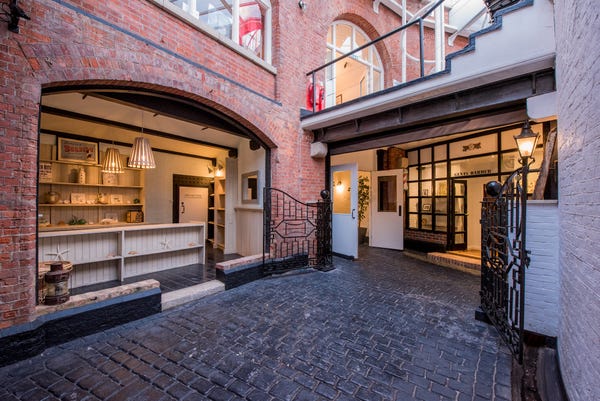 Renovated between 2010 and 2015, No Man's Fort also has a spa, cabaret bar, and its own pub called The Lord Nelson.

Although the forts are mainly accessible by boat, No Man's Fort also has a helipad, only a 20-minute ride away from Central London. 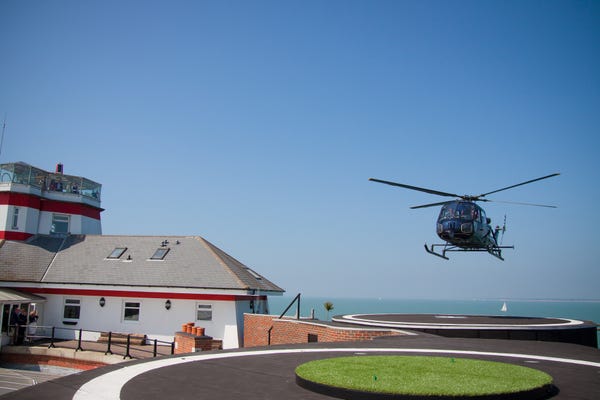 For Clare, although much hard work and effort have been put into both forts, they don't need to be continued to be used by the new owners in the way they are currently.

"It's about finding some who wants to use them. So whether it's a home, or hotel, or whatever, it's just about allowing people to actually have access and visitors to see it," he said.

The bedrooms on both Spitbank and No Man's Forts are sizeable and come with a beautiful view of the ocean. 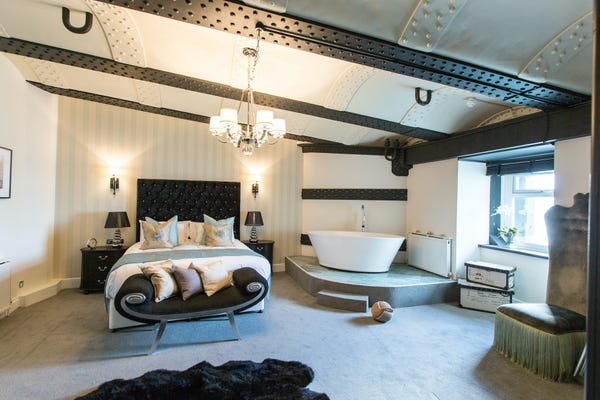 "It's just so magical," said Clare. A night in the fort can cost anywhere from $927 for a double deluxe room to $993 for a premier room.

The central staircase of No Man's Fort connects all of the fort's many rooms. 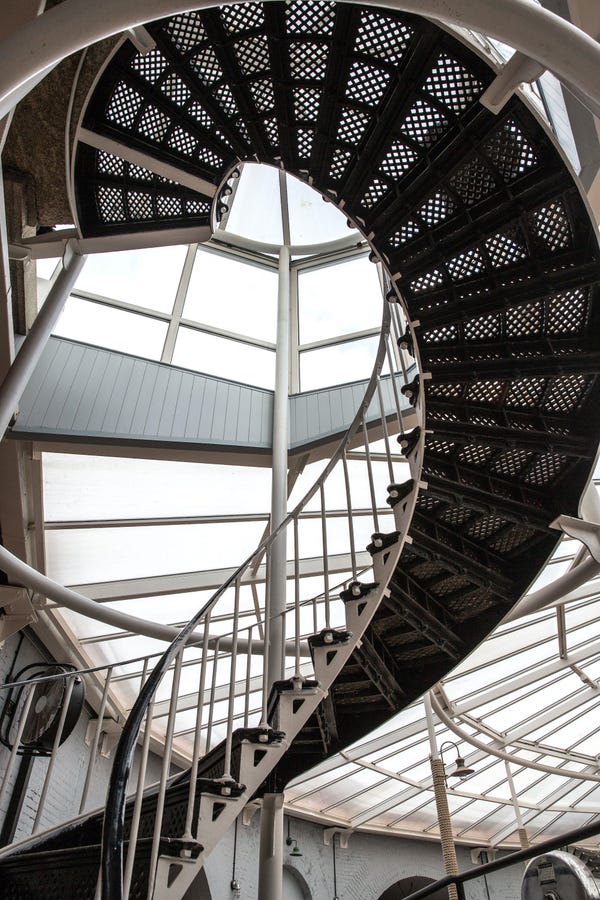 The forts also have their own wells that date back to the Victorian era. They go right through the seabed into an underwater freshwater river.

"I'm always amazed that Victorians knew where the underwater river was, they built the forts on the sandbank within the sediments and sort of drilled down," said Clare.

The wells are still used to this day and the water is filtered, bottled, and sold on the forts.

The forts have been used for a host of events over the years, both private and public. One of Clare's fondest memories is of his nephew's "very special" wedding. 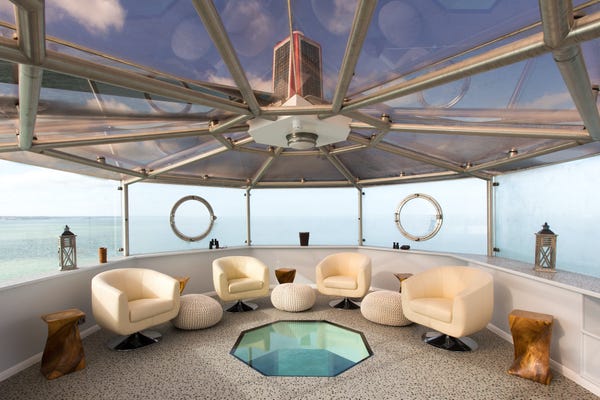 Staying in a fort has its benefits, mainly seclusion. For Clare, who has hosted a number of parties, dinners, and charity events, "it's just so exciting because you can do what you want and make as much noise and you don't have to worry about neighbors."

At the very top of No Man's Fort is its own lighthouse, while the bottom floor is currently an entertainment space that hosts laser tag.

A hot tub is also a nice touch. 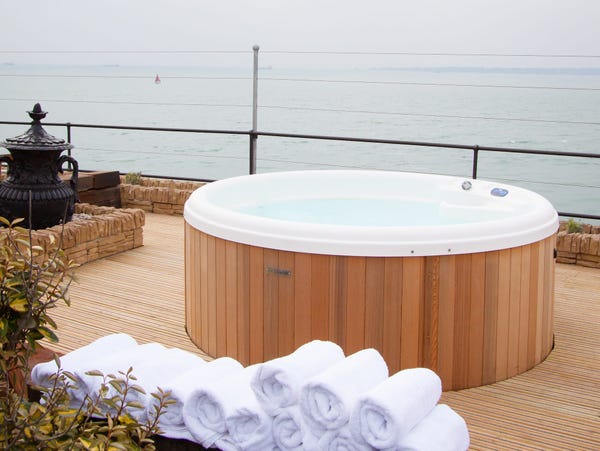 For those who can't visit in person, you can take a virtual tour of both Spitbank and No Man's Fort.

Horse Sands Fort is on the market for approximately $980,000 and has the potential to be used for literally anything. 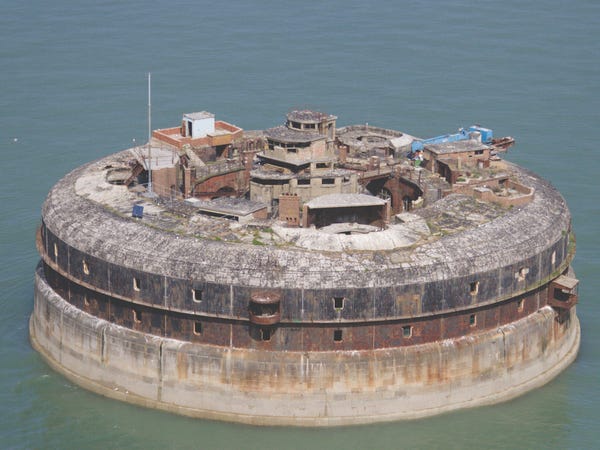 For Clare, his hopes are that someone will take it on and turn it into a museum. "A Madame Tussauds on steroids," he said. The fort is mostly untouched and in its original state, meaning that there is a lot that needs to be done to it — hence its much lower asking price than the other two forts.

The interiors and exteriors are a glimpse into the past and highlight the other two forts' extensive renovations. 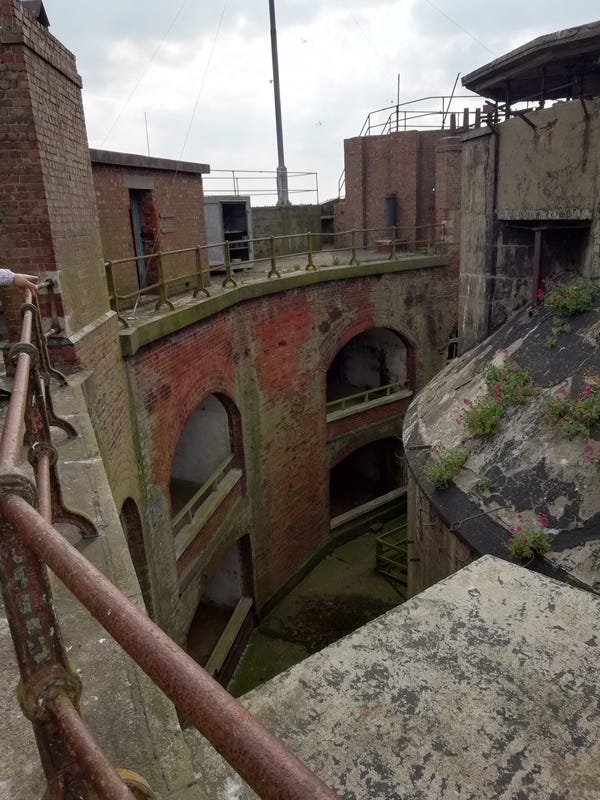 Although a blank canvas, Horse Sands has been restored to a safe standard. It's also the same size as No Man's Fort.

It currently serves as a museum of sorts and houses artifacts that date back to the 1800s as well as WWI and WWII.

Clare has owned the forts for the past 10 years and hopes to still be a part of the story. 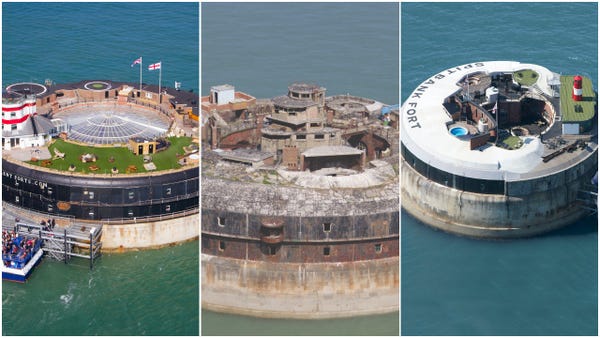 Clare has had a few offers, many of which have expressed wanting to involve him in some way.

"I'm at an age now where I sort of have other things that I'm doing, and I haven't really got the time to devote to it. I'd still be happy to be partly involved in one way or another because I love them so much," he told Insider.

Each fort is available to buy separately or in groups of two or three and you can find the listings here.