Angelica Cheung has spent much of her 20 years in the fashion industry in transit.

The editor-in-chief of Vogue China – and the publishing brand's Chinese offshoots Vogue Me, aimed at millennials, and Vogue Film, a video-led platform – spends half her year travelling for business in Europe, the United States, and more recently Australia, where she finds we’re now much better at getting dressed than we used to be. 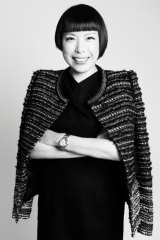 Cheung did her MBA at the University of South Australia, holidays here and has attended Australian Fashion Week.

Next week Cheung will give the keynote address at the Sherman Centre for Culture and Ideas Fashion Hub event series in Sydney. The topic? "China: 21st-Century Producer & Consumer." China is on just about every fashion house’s mind, and business ledger.

Cheung, 52, affectionately known in the industry as AC (“Angelica Cheung is too long,” she says) is the youngest editor-in-chief of Vogue at Conde Nast and launched Vogue China in 2005 to instant success and two reprints.

The magazine has a print readership of 2 million, a social media following of 23 million, and the website has 24 million viewers per month. According to Vogue’s new business platform, Vogue Business, Vogue China's website readership is growing at almost 200 per cent per month.

Cheung has become the oracle for brands who want to "have a plan for China". It’s crucial, given that consulting firm Bain says Chinese shoppers account for around a third of the world’s luxury sales.

Yet so many brands are getting it wrong.

Not Dolce & Gabbana levels of wrong, perhaps – last year the luxury Italian fashion house courted controversy for a campaign featuring an Italian model eating spaghetti with chopsticks which was deemed racist, as were designer Stefano Gabbana’s subsequent comments defending the idea. But they’re getting it wrong in their decisions to create a one-off campaign or capsule collection for the Chinese market or by trading in stereotypes about the Chinese consumer.

“The stereotypes – that Chinese consumers had money but no taste – that has changed a lot,” says Cheung, noting that the Chinese no longer "love symbols and logos".

"They are confident to buy something because they love the designs, the clothes, the quality, not because their friends would think they’re successful or rich.

“[The Dolce & Gabbana scandal] was a reminder to people China is a big country with a lot of people, they have attitude. The Chinese are increasingly becoming very proud people.”

According to Cheung, brands are not investing adequate time into listening, and understanding, the Chinese customer.

“I’ve been going to Europe, to America, to Australia; learning about Western fashion, about the cultures behind the fashion in order to do this job well and help brands expand in China,” she says.

“I talk to all the CEOs constantly, executives and designers all the time to understand their business, so I know how to support them in China.

“[Brands] need to come to China, to take it seriously and understand the people they’re trying to sell to.”

Cheung, who believes businesses must have "heart and soul", likens courting the Chinese customer to forging a new friendship: it doesn’t happen overnight, and it’s OK if you embarrass yourself a little bit, so long as you learn from it and the right intentions are there.

“You can't just make friends because you have one lunch, one dinner – you need to devote time,” she says.

The Chinese fashion industry, she says, has become vibrant, so much so that Cheung had to ditch a column in the magazine spotlighting Chinese designers because there were too many of them. Instead, Chinese brands are incorporated into editorial photoshoots with Western brands.

"I don’t do the column because they’re part of the establishment now, we shoot international labels and Chinese labels and don’t differentiate anymore."

Cheung sees this confidence in the designer and in the consumer in Australia too, observing that Australian designers are increasingly viewed as more than "local" brands, not an easy feat given the tyranny of distance and climate.

"Australian fashion collectively needs to reflect the Australian way of life, which I find very attractive," she says. "It's a big task to do … [but] the world doesn't need a few more 'brands from Australia', unless you are communicating something that is very Australian."

When she first visited Australia Cheung didn't think there was much of a fashion scene. "Nobody was really interested in fashion, people were very sporty … in recent years that's been changing. People are more polished, more fashion. That's why I'm going more [to Australia], in the early years there was nothing much related to what I did."

A former Goldman Sachs investment banker with a degree in law, Cheung is often lauded for her astute business sense. She launched new Vogue "IPs" ahead of her time, courting millennials and social media. She sees one of the most important parts of her job as staying current, modern and relevant.

“A lot of media is struggling with 'how to modernise'. For me, I never really sat down to think: ‘How do I modernise Vogue?’ It comes naturally of you being a member of the world today … You have to read a lot, look a lot, talk to a lot of people.”

Staying relevant to the younger generation is something Cheung says comes easily, in part because of her 12-year-old daughter, Hayley. "You can’t fool millennials … they see through you if you are trying to appeal to them."

Instead Cheung says connecting with millennials, who she calls the “next pillars of society”, is about genuinely wanting to impact on their lives and, yes, having heart and soul.

For Cheung, Vogue China’s soul is about “values”: staying positive and helping others. High-gloss fashion isn’t enough. And neither is limiting their audience.

“We used to say the Vogue reader was between 25 and 35, educated with a high income, all that, but it’s not about that anymore, it’s beyond that," she says. "We also have a lot of men reading us. It’s very modern, the world has changed so much … the Vogue China world has become wider and wider. On many platforms we touch upon many people’s hearts, spirit and outlook on life.

“Really good business is the kind you don’t have to try too hard [at], because your heart is in it."

Angelica Cheung will speak at the Sherman Centre for Culture and Ideas Fashion Hub event. For details see: Scci.org.au