WHEN Crystal Ship Kelly got an elaborate new tattoo earlier this year, she couldn't wait to show it off on social media.

The TikTok star – who boasts over 200,000 followers – had a ram skull tattooed on her midriff which completely covered her belly button and went right down to her bikini line. 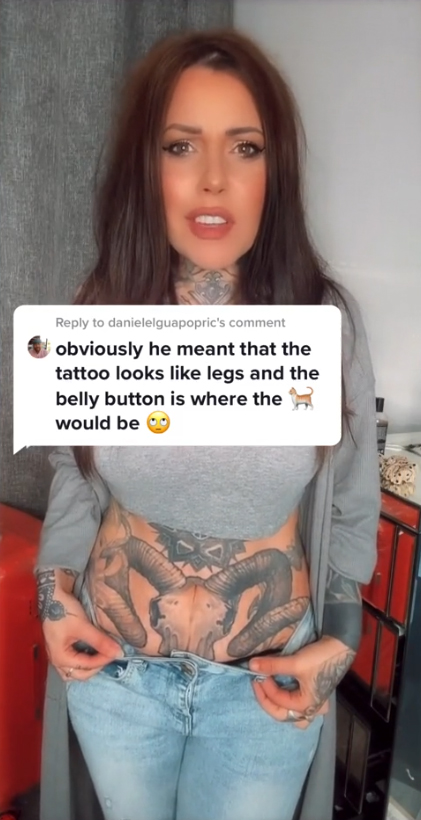 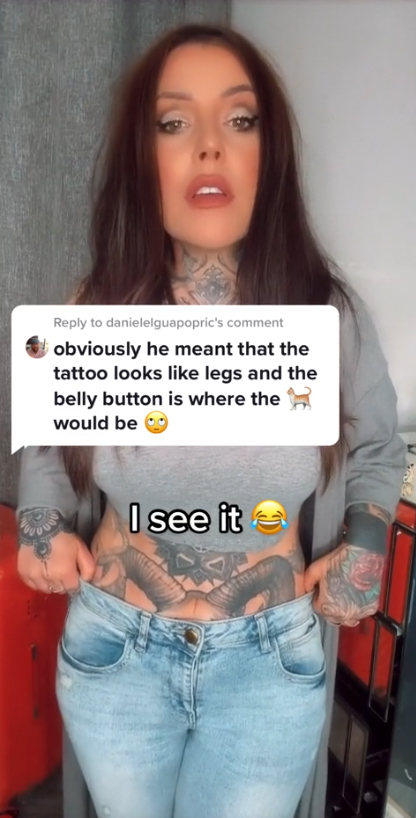 However, it was only when she shared it online that the social media star realised the VERY rude design flaw.

In a video that's been seen by over 189,000 people, Crystal addressed one viewer who claimed the ram's horns could be seen as a pair of women's legs splayed out.

Rolling down her jeans so fans could see the whole thing, she said: "I don't get it.

But as she looked at it closer, she realised the viewer had a point.

Crystal hitched her jeans up under her belly button – which, we have to admit, does make it look a bit like a woman's crotch.

She then captioned the clip: "I mean they would be some UGLY a** legs but I see it, thanks for that!"

They would be some UGLY a** legs but I see it, thanks for that.

The clip has racked up over 6,000 "likes" and people in the comments said she should probably just stick to VERY high-waisted or low-rise jeans in future.

One replied: "Only wearing low-rise jeans from now on!"

Another added: "Wait. So it's a granny in stockings? Or a goat's skull?"

Earlier this year, we revealed how this woman accidentally got the most hilariously unfortunate pre-Covid tattoo – and had to hide it for a year.

For more viral stories, these are the hidden dangers of cleaning revealed as expert warns vacuuming and even IRONING wrong could leave you wracked with pain.

Plus this man claims his wife ruined their wedding by not wearing makeup – she wanted to look natural but he says the photos are terrible.