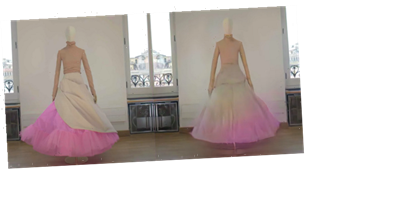 There was an expected visitor in the atelier throughout the construction of Valentino’s spring 2021 couture collection. As the house’s seamstresses worked to execute creative director Pierpaolo Piccioli’s vision, they were closely observed by machine-learning algorithms, which then “taught” their craftsmanship to AI technology. Months later, there were two outcomes: the collection presented in pre-recorded runway show, titled Temporal Code, and an audiovisual artwork of the collection, also titled Temporal Code.

The latter is the brainchild of Robert Del Naja, a founding member of the English electronic band Massive Attack. (He’s also a graffiti artist, which has led some to suspect that he’s actually Banksy.) But he couldn’t have done it without Mario Klingemann, a German artist and “neurographer” who works with AI, data, and code. Lately, he’s added fashion to that list; Klingemann recently trained AI to recreate 20 years of catwalk imagery in the style of 16th-century painter Hieronymous Bosch.

As for what the AI recreated this time, Valentino’s spring 2021 couture collection featured lattice-worked coats, poplin skirts, and roomy cashmere capes. It also got to capture a first: Valentino couture for men, which sounds like it’s here to stay. “It’s for the very first time,” Piccioli told Vogue. “But couture is for people. I don’t care about gendered (fashion).”

Related: So, Banksy’s Real Name Is Robert? (Also, How Much Longer Will We Continue to Care About This?)