A MAN'S Tinder profile is being mocked online for its ridiculous list of demands from women – which bans girls' nights out.

Known only as Chad, his profile – which shows a topless snap of himself flexing his biceps – has found its way onto Reddit. 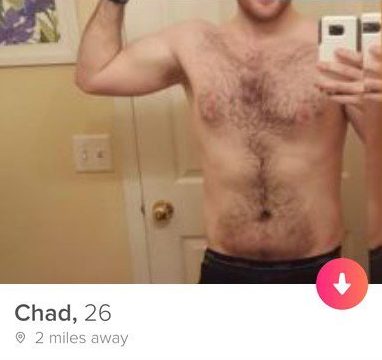 The picky 26-year-old lists the exact qualities he's looking for in a girl, saying: "If you fit this criteria swipe right, I will not settle for anything less."

For any women hoping they fit the bill, Chad, believed to be from the US, is looking for either a blonde or a brunette.

Chad also specifies they: "Be available at all times. Devote as much of your time to me as possible. 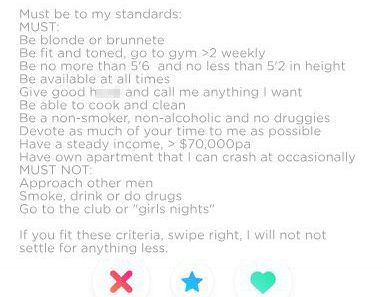 "Give good h**d and call me anything I want. Be able to cook and clean."

But he wants his women independent too, as they must also have their own place to live.

Chad said she should: "Have own apartment that I can crash at occasionally."

But if you want to land this catch, you better be squeaky clean and basically have no friends.

Chad doesn't want his women indulging in anything naughty, so stresses they should be "a non-smoker, non-alcoholic and no druggies".

He later clarifies he's not only uninterested in alcoholics, but any woman who drinks also needn't apply.

And being faithful is key, as any potential dates shouldn't "approach other men", and say goodbye to your friends as you can't "go to the club or 'girls nights'".

His bonkers bio is being mocked mercilessly online, with one person saying: "He'll find his patch in the 1950s."

Another person questioned: "Ummm how can she give him all her time if she is out making 70k a yr."

And this person rightly said: "He should also fit this criteria then."

In the world of dating, one single mum has made more than £10k by charging married men to date her.

And this woman clearly had different priorities, after she blasted her date for not paying for her £72 lobster.

While another woman revealed she was taken on a date by a bloke – who did it for a dare.