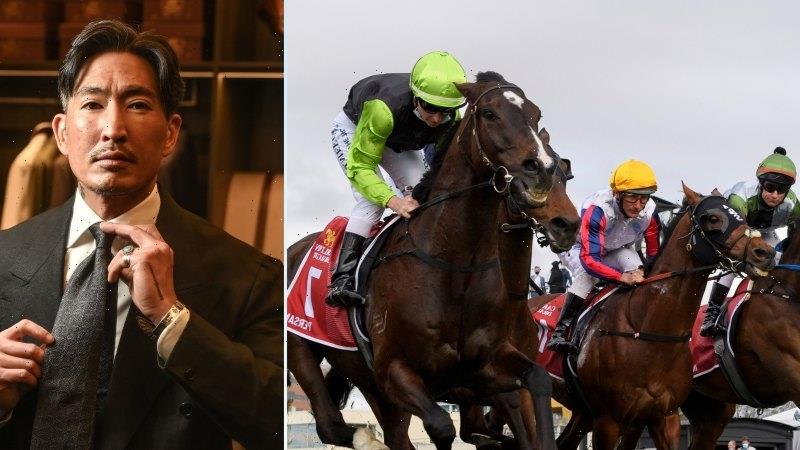 Derby Day will be the first occasion in months that many holders of tickets to the exclusive Members Enclosure at Flemington racecourse have had to recall the intricacies of placing a dimple at the centre of their half Windsor knots. The races have joined court hearings and awards ceremonies among the increasingly rare occasions where masters of the universe sport ties.

While ties are popular at the races, where women still wear hats and carry the occasional parasol, lockdown has made those who wear them to Zoom meetings seem over-dressed and over-eager, propelling the silk strips into the quirky territory of bow ties, bowler hats and braces. 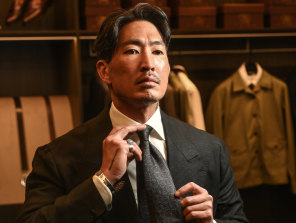 The manager of Masons menswear Nami Nguyen leans into the monochromatic Derby Day dress code with a tie.Credit:Justin McManus

“There is no denying that the performance of ties has moved in a downwards direction,” said Nami Nguyen, manager of Melbourne menswear boutique Masons. “We are selling fewer ties because style has evolved and the world is a much more casual place today.”

The popularity of ties has taken a nosedive since 1995, when US sales peaked at $US1.8 billion ($2.4 billion) annually, according to market research firm the NPD Group. Following the rise of a smart casual Silicon Valley, sales were last reported at $S418 million ($554 million) in 2009 and have been falling since.

Model brothers Jordan and Zac Stenmark embraced the tie (but not socks) at a Lexus event in Sydney celebrating the launch of the Melbourne Cup Carnival.

Billionaire boys Elon Musk, Bill Gates, Mark Zuckerberg and Elon Musk who prefer to wield power in T-shirts, or with their top buttons modestly undone bear the brunt of the blame.

In 2017 leading bank Goldman Sachs acknowledged that to attract new talent tie-wearing rules needed to be relaxed and their peers followed suit, but the Victorian Racing Committee is holding firm.

“Gentlemen are required to wear a suit, or tailored slacks (tailored chinos are acceptable) and sports coat or blazer, plus tie or bow tie and dress shoes,” the rigid rules for Members decree.

For department stores and menswear boutiques it’s a 155cm lifeline.

“October and November are our biggest months in sales units in ties as customers prepare for the race day calendar and all of their summer events such as weddings and Christmas functions,” said Justin Ng, Myer’s menswear manager.

While Ng has been pushing $29.95 ties from entry-level brands Blaq and Kenjii, Nguyen at Masons caters to a crowd searching for sartorial splendour.

“We have clients who still wear ties religiously, and we absolutely love that about them,” Nguyen said. “They’re usually our corporate clients and menswear enthusiasts. I have found that the artisanal sartorial and luxury brands have always been able to adapt to the changes – there will always be a time for a more distinguished look so whether you have only one or two, or a vast collection, a well-made tie will certainly add to that opulence.” 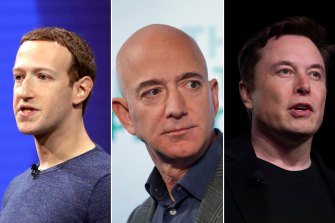 Spend wisely, however, as stylist Dale Mckie who hones singer Guy Sebastian’s fashion forward looks on The Voice, predicts that ties will continue their retreat from runways as gender-neutral looks gain in popularity. The presentation for Tom Ford’s most recent menswear collection, failed to include a single tie.

“Ties are not something that I encourage my clients to wear. To me being a bit undone is far sexier and chic than being so dressed,” Mckie said. “I feel that the client is more comfortable and more themselves when they’re not wearing one. I certainly don’t feel like myself when wearing one. It’s always a sigh of relief to take it off at the end of the day.”

Mckie is following the same relaxed path as Hollywood stylists. At the Emmys in September Bridgerton’s Regé-Jean Page, Schitt’s Creek’s Dan Levy and Hamilton star Leslie Odom Jr. all made the best-dressed lists without ties.

For those closer to home and sticking with tradition at the races and Melbourne Cup lunches, style leader Nguyen is reluctant to enforce a recommended knot on customers. If you have to wear a tie, take a Zen approach and let the knot choose you.

“Knots say a lot about a person’s style. But I would say try a four-in-hand. It’s the only one I prefer.”