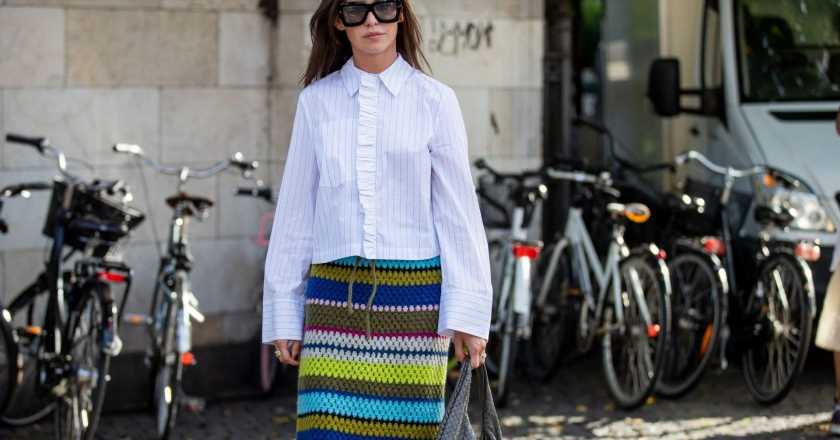 Written by Naomi May

From Harry Styles to Ella Emhoff and Tom Daley, it seems our collective craze for all things crocheted knows no bounds; but there’s one unequivocal style star that’s broken out of the knitted realm.

Following hot on the heels of that viral Harry Styles-approved JW Anderson crochet cardi came Vice President Kamala Harris’ step-daughter Ella Emhoff’s knitwear debut (which unsurprisingly sold out in a matter of minutes), which then escalated to Tom Daley, who took his new-found passion for crochet crafting centrestage in Tokyo at the recent Olympic games.

Indeed, it’s not just fashion that’s having a love-in with the It knit of 2021, the pandemic crafts’ break-out star so to speak, but the style sphere does appear to have fallen head over heels for one member of the crochet family in particular, and no, it’s not Daley’s knitted gold medal holder. It’s the once frumpy, now fabulous, crochet skirt, which thanks to endorsements from a clutch of brands has seen its status rehabilitated in recent months.

Peppered throughout the recent spring/summer 2022 shows at Copenhagen Fashion Week, homespun-inspired holes were weaved into all manner of skirts, from sheer minis to flesh-flashing midis, such as those which were sauntered down the catwalk at Ganni. Fashion bigwigs championed holey moley skirts, too. At Chanel’s autumn/winter 2021 show, crochet was interpreted into the shape of form-fitting pencil skirts, proving its clout in the style sphere, while for Miu Miu and Celine, it adopted the form of coats and shearling jackets.

Instagram wants in on the trend, too. Members of the virtual crochet community include London-based label Cro-Che, which launched in lockdown last year, and woven wonders Memorial Day, whose big name fans include Rihanna and Bella Hadid.

It’s no surprise, given the names that have attached themselves to the It knit trend, that according to global fashion platform Lyst, searches for crochet knitwear spiked by 89% in the week following Tom Daley’s crochet debut at the Olympics.

If a crochet skirt isn’t for you, look to a dress or a top or, in case you’d rather not wear your knits on your body, adopt a woven bucket hat instead, whose star has also been on the ascent in recent weeks. The key is to let your crochet piece do the talking for you; keep the other components of your ensemble minimal and pared-back, such as a boxy leather blazer or a simple ribbed tank top.

There’s a little holey homespun something for everybody: get in on the breakout It knit trend of the summer.