On Sunday, when Ariana Grande announced her engagement on Instagram, the congratulatory likes and comments flowed in immediately. So did the questions: about her fiancé (a luxury real estate agent named Dalton Gomez), the duration of their relationship (roughly a year, though quarantine timelines should probably be weighted to account for constant contact), the composition of her photography (was she in a car?) and, of course, the ring.

Celebrity engagements have driven entertainment news cycles for decades, but Ms. Grande’s announcement — shared on the eve of her new Netflix special and just over two years after her split from the comedian Pete Davidson — has drawn outsize interest and become one of Instagram’s most-liked posts of all time.

For all those reasons and more, we thought it was worth a closer look.

This Was a Year of Quarantine Engagements

Demi Lovato and Max Ehrich did it. Brooklyn Beckham and Nicola Peltz did it. Your cousin did it, and so did your old college roommate (probably).

Now, Ariana Grande has joined a long line of celebrities and mere mortals who said yes to their quarantine sweeties this year, irrespective of traditional timelines.

According to People Magazine, Ms. Grande and Dalton Gomez, who works in residential real estate in Los Angeles, started dating in January. In May, he appeared in the music video for Ms. Grande’s song with Justin Bieber, “Stuck With U.” Seven months later, the two are engaged.

Various data points suggest that these days, monogamy is in. Major jewelry retailers like Kay, Zales, Peoples and James Allen are reporting more sales this summer and fall compared to last year, according to The Washington Post. The trend makes sense: Dating around doesn’t look as exciting in a time when every in-person encounter carries the risk of a life-threatening virus, and when flowers and chocolates have been replaced by an N95 mask and proof of your latest Covid-19 test.

“A bunch of people have started relationships, probably because people are lonely, they’re spending more time getting to know someone, and people are being less promiscuous,” said Lauren Bille, the chief executive of Allbodies, a health education platform.

A Photo Dump Was the Only Way to Go

Back in 2017, when people still made their relationships “Instagram official,” the default engagement announcement format was a ring selfie: a zoomed-in shot of a perfectly manicured hand (usually a woman’s), held up against a clean background. The ring was always the focal point.

Since then, Instagram has evolved from a feed of staged images to something much messier, devoid of a dominant aesthetic or careful curation. In 2020, a year so hellish that the old rules of Instagram could no longer apply, a new format surged in popularity: the photo dump.

It’s how Ariana Grande announced her engagement and also how most internet-savvy celebrities have been posting for months now. Kylie Jenner rarely shares a solo shot to her feed anymore, but rather carousels of outtakes and moments from her life. Billie Eilish often does the same, unloading a mix of iPhone photos and blurry videos to create mini Instagram albums. Throughout the pandemic, the playwright Jeremy O. Harris has been posting “coronavirus mixtapes,” Instagram gallery mash-ups of memes, TikTok videos and photos from his daily life.

This is the way we post now. Gen Z has led the charge, embracing this format first and most frequently. Maybe it’s because they never had the chance to upload 40 hazy party pics to a Facebook album in the aughts, or perhaps they’re seeking to memorialize life moments in a way only a photo gallery can. Or maybe everyone has collectively given up. Who has the time or energy to spend finding and editing that One Perfect Shot? It’s much easier to post by the handful.

Obviously We Have to Talk About the Ring

When Ariana Grande and Pete Davidson got engaged in 2018, a month after their whirlwind courtship began, the singer started sporting a brilliant, pear-shaped ring rumored to be worth $100,000. It was exactly the sort of ring you’d expect a celebrity to wear: big and bathed in diamonds.

Her ring from Dalton Gomez is a bit more unique: asymmetrical, with a pearl and an oval diamond set on an east-west axis. According to Sheryl Jones, a fine jeweler in New York City’s Diamond District, this design, particularly the pairing of two different gems, is “very unusual.”

“I would describe it as definitely a fresh and nontraditional approach to an engagement ring,” Ms. Jones said, adding that “ovals are really, really popular right now.”

Over the last several years, she said, people have grown increasingly interested in “fancy shapes”: ovals, pears, radiant-cut stones — really anything besides a traditional round diamond. “I think for women who want more of an engagement ring that is nontraditional or has a little more personality and style, they’re attracted to those kinds of cuts,” Ms. Jones said.

Trends also show that surprising gemstone colors, like a green or gray sapphire, have become all the rage too. “People are finding ways to express themselves in engagement rings now and there is no standard way of approaching it,” Ms. Jones said.

There was a time when getting dressed for the evening to go to dinner in a formal dress and statement jewels was the only time a luxury ring would be worn. But now, a more modern lifestyle demands a ring that is comfortable and wearable all the time, Ms. Jones said. “It’s got to be able to bridge that casual to fancy.”

“I think that this approach just makes it more a part of her lifestyle,” Ms. Jones said. “Because when you look at a more traditional wedding ring, if your lifestyle is more fun and unconventional, you want a ring that reflects that. And I think that that’s what women are asking for now.” — EVAN NICOLE BROWN 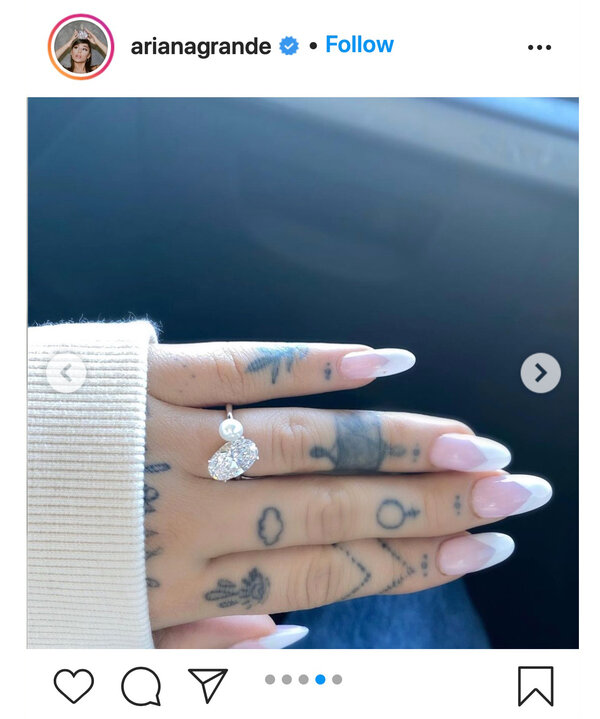 The Pearl, Specifically, Is a Choice

It is natural for a person to look at a clamped closed mollusk and think, “Whatever you’re doing in there, I’ve got to have it.” The urge to open the entirely shut is how humans ended up with fried eggs, juicy melon flesh, honey, geodes and frightening individual experiences at haunted amusement parks.

But once a man or woman has loosed their prize — which is, if they are lucky, a granular irritant a mollusk has coated in several layers of secretions in order to protect itself — should it be set into a ring intended for everyday wear? Perhaps not.

“In the case of pearl rings, please be aware that these are only to be worn for dress and are not intended for everyday wear,” advises the website of Mikimoto, the famed Japanese pearl jeweler credited with inventing cultured pearls in 1893. In contrast to hardy diamonds, pearls are easily scratched and can deteriorate from contact with perfume, cosmetics, hair spray, lotion, detergent, lemon juice, vinegar and any number of other household products. (Also: sweat.)

Even jewelry security boxes are chambers of horrors for pearls, where they may scrape up against other items or, if left alone in the receptacle for extended periods, gradually dehydrate.

On top of all this, Ariana Grande’s pearl could be extra fragile due to age: There is some evidence to suggest that the pearl in her ring might have been repurposed from another ring set with a pearl originally taken from her late grandfather’s tie pin. — CAITY WEAVER

And Now, Some Optimism

It’s easy to be cynical about celebrity engagements — or any engagement, really. Couples blow thousands (if not millions) of dollars on diamond rings, hundreds more on professional photography and celebrations, all for a commitment that may only last a few years, months, weeks or days.

Much harder is the work of being happy for other people. While celebrities, including multiple Kardashians and Diane Keaton, have commented with enthusiastic excitement and love for Ariana Grande and Dalton Gomez, many more watching from home have speculated about the timing of the announcement (was it publicity for her concert film?) and the likelihood that the couple will ever wed. The usual stuff, but magnified to scale with her mega-stardom.

Yes, Ms. Grande is a wildly successful pop artist with an estimated net worth exceeding $100 million. She is also a 27-year-old woman who has endured enough traumatic experiences to fill several lifetimes: a suicide bombing that killed more than 20 people at one of her concerts; the public unraveling of her first almost-marriage; the untimely death of a former partner; the suggestion, from an army of fans, that she was to blame for her ex’s tragic undoing.

Wouldn’t it be nice if things just … worked out? I’m rooting for these two. — BONNIE WERTHEIM