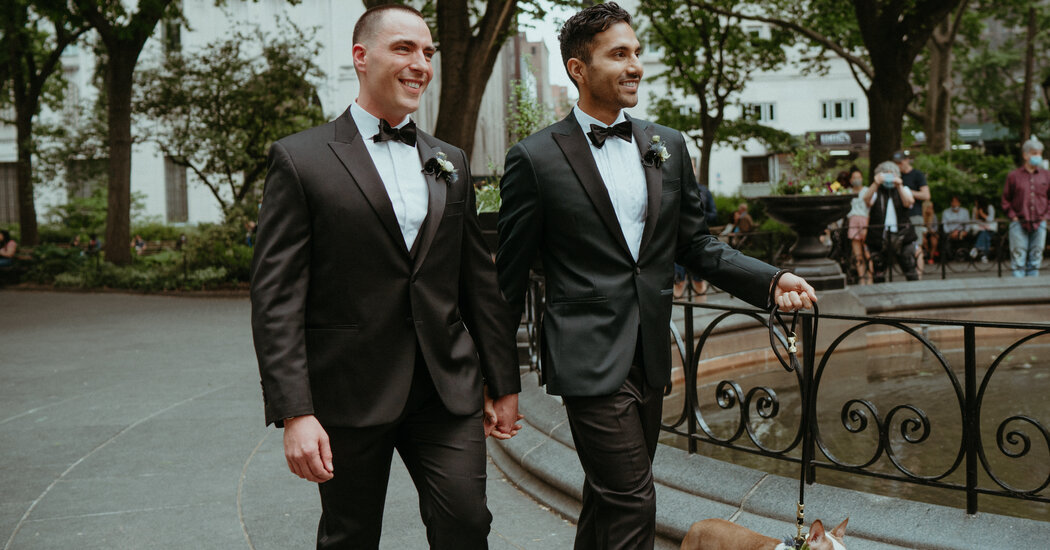 If it were not for Christian Zavala’s spontaneity and bravery, he and John Berno would not have met. The two matched in March 2017 on Scruff. For two months hellos and niceties were occasionally exchanged.

“Christian was stunningly beautiful,” said Mr. Berno, 38, a psychotherapist in private practice in Manhattan. “I was intimidated. I dodged connecting because he was out of my league.”

On May 31, Mr. Berno received a text from a number he didn’t recognize asking if he wanted to get together.

“I knew John was my type,” said Mr. Zavala, 32, the owner of Zavala Interiors, an interior design firm in Manhattan. “I had this intuition telling me to text him. I reached out to see what he was doing.”

Mr. Berno kindly texted back for more information. Once the mystery was solved, Mr. Berno, having his own moment of spontaneity and bravery, agreed to meet Mr. Zavala at his apartment in Gramercy three hours later.

“When Christian opened his door and smiled I was momentarily paralyzed,” he said. “I had to remind myself to say hello.”

It was the same for Mr. Zavala. “John had a sparkle to his eyes and a flutter started inside me,” he said. “There was an instant connection just by saying hello and making eye contact.”

They walked through Madison Square Park before deciding on dinner at the now-defunct Pavilion, at Union Square. Afterward, more walking and conversation.

“I had not met anyone I’d been that open with and who was so relatable,” Mr. Zavala said. “We both had our guards down.” 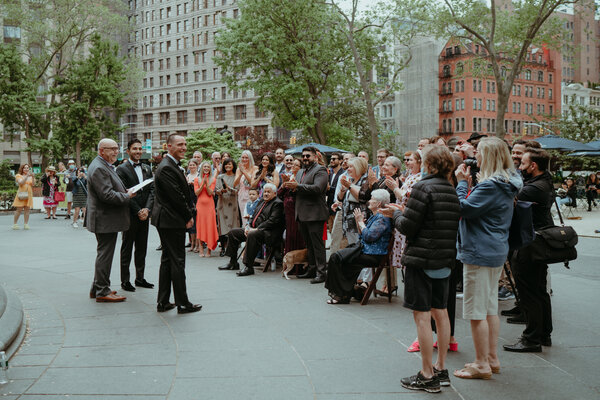 “When we kissed in front of his building I lost my breath,” Mr. Berno added. “Something happened chemically in my brain.”

The relationship moved quickly. By early August they became exclusive. By the end of the month, Mr. Zavala said “I love you.”

“We would take a lover’s stroll where we’d talk, hold hands, and check in,” Mr. Zavala said. “Toward the end of the walk I pulled him over to the fountain,” at Madison Square Park, “which had become significant to us as our special spot. He smiled and said, ‘I love you, too.’”

A proposal came that August, at the fountain, of course. Mr. Berno surprised Mr. Zavala by getting on one knee and having 30 of their friends and family witness the event. “We walk past it every day,” Mr. Berno said. “When we do, we kiss.”

A month later, Mr. Zavala proposed on the beach in the Hamptons. Within no time a wedding date was set: May 16, 2020. A venue and vendors were booked. Invitations to 235 guests were sent.

A wedding shower for Mr. Berno took place in September and for Mr. Zavala in November. Then the pandemic hit. The couple canceled their first wedding date, then their second on Nov. 21, 2020. Vaccines became available. A third date was set.

On May 16, 50 guests gathered at the fountain in Madison Square Park. Mr. Berno’s father, Chris Berno, who became a Universal Life Church minister for the occasion, officiated. A dinner for family followed at the rooftop suite of the Maritime Hotel. Close friends joined afterward.

“Christian helped me have a different experience of love,” Mr. Berno said. “I didn’t know this kind of love was possible. I get struck at the beautiful, random way we found each other. I counted him out. I was wrong. I was never going to reach out to him. He was too everything.”

“If I hadn’t instigated the text it would have been a huge loss,” said Mr. Zavala, who felt similarly about their fate. “I feel so secure in knowing I got it right. I’ve only seen love in John’s eyes. I feel lucky we have this connection.”