When the obstetrician disappeared momentarily during the birth of my first daughter, it was to change into white wellies and grab a plunger thingie. "Are those boots for all the blood?" I joked, from my semi-conscious state. "Yes," he beamed back.

No good can come from a white boot fashion trend. 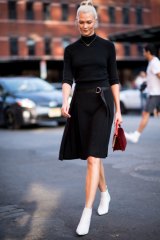 But, OK, I thought, if I'm going to dip my toes in lab-chic, it's going to be the sleek option from a brand incapable of doing trashy. Aeyde, a Berlin-based label that specialises in minimalist, modern, un-welly-like designs, would be the ones to come up with the goods. A low block heel with a chiselled toe, they represented the Bauhaus school of white boots. Most crucially, the ankle shaft was reasonably fitted. But what no one tells you about white boots, probably because they're so busy explaining how disruptive, transeasonal and transformational they are, is that unless they fit you seamlessly, which 99 per cent don't, they'll give you cankles so humongous you won't be able to see your toes.

I went the opposite route: a kitten-heeled, pointy Victorian pair laced up very tightly over the ankles.

Why was I persevering? Because the white ankle boot has become a fashion meme, more divisive than you know what and in terms of one's personal style, considerably more important.

So, as per the block heels, I put the Tonyas with navy or grey trouser suits, with jeans, with dark dresses. And then I took them off again. Every time. The white was too white, the pop too jarring, the Tonya too Tonya.

Yes, black, brown, burgundy, navy or tan boots are predictable (although I prefer classic), but they all looked better than the white options. At my age I'll take predictable if it happens to look better. 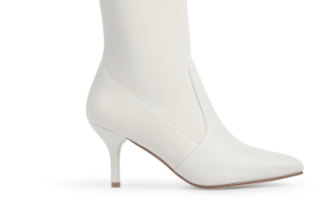 A surprisingly controversial piece of footwear.

But don't assume I'm not up for some experimentation and irony. The eye must travel, as Diana Vreeland announced (she obviously never experienced the brutal red pen of the British sub-editor), and sometimes that journey takes one's eyeballs way out of their comfort zone. If it didn't we'd still be draped in ferret skins. I'm just not convinced this particular journey is worth it.

Sometimes though, usually a minute before fashion month, when you're about to mingle with fashion's most dedicated followers for four weeks, you panic. You look at your carefully curated dependables and think, where's the disrupter? Where's the transformational bit? Where the hell is everyone's eye going to travel?

So the night before leaving for Milan, I find myself WhatsApping my friend Carolyn. White boots or not white boots? "Absolutely NOT white boots," whooshed back the reply. 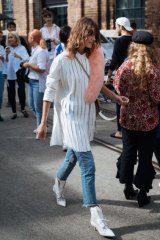 Some next level white boots.Credit:Giuseppe Santamaria

I trust her implicitly. Yet so intense has the flow of white boot propaganda in our office been, I found myself pausing by the winking white boots when the Uber arrived the next morning and wondering what Emmanuelle Alt would do. The 5ft 9in stiletto- and drainpipe-wearing editor in chief of French Vogue adheres to what suits her, while subtly recalibrating it every so often to maintain its currency – an MO that strikes me as the epitome of style. While my bags were being loaded into the car, I Googled to see if there were any pictures of Alt in white ankle boots, There weren't. Case closed.

Alt obviously appreciates the freshness and impact of white. But she gets her hit in other ways – mainly white shirts and jeans.

As, so far, do I. With white dresses, trainers, legs and bags (even though 10 years ago I thought they were naff). Meanwhile, I'm parrying with white patent shoes – flat, or a heel. With bare ankles, they add a pop that looks right. You could wear these at any age without looking a victim and in another 10 years, I may have come round to white ankle boots. 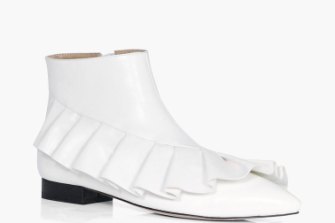 Adding another dimension to the argument: frills.

Sometimes, all it takes is the discovery of one surprise item to make one re-evaluate everything else in one's wardrobe entirely. It was white boots that did it for me last autumn, during that awkward time when tights aren't quite necessary but sandals are out of the question. Just the kind of weather phase we're entering now, in fact.

It was a pair of kitten-heeled, bright white little ankle boots from Mango that proved to be completely transformative; they offered the cosiness still necessary but unlike their darker, more sensibly-hued counterparts, they were a stark and – it turned out – chic pop of lightness. And, most importantly, somehow managed to look good with everything; I loved the way they emphasised the last remnants of summer tan (you may need to fake it at this end of the season) when worn with a tailored midi skirt. It was quite genius how they took the bohemian floatiness of a floral dress and gave it immediate edge and if you're wondering about new ways to enliven your jeans repertoire, I can reveal that adding a white boot is immediately brilliant and works especially well with darker indigo denim.

Over those few months, and even into tights season, white boots became the crux of my wardrobe, the thread holding it all together. No matter how simple the rest of the outfit, they give everything an immediate twist. Which is why I'm baffled by naysayers like Lisa.

Of course, the white boot has its downsides. I shan't dwell on them, but yes, one must avoid all abattoir uniform connotations (an elegant heel soon puts paid to that niggle) and it took me all this time to try them because I'd dismissed them as an Eighties trend that should never be resurrected.

I will say that the moment you find the boots for you, you should also track down the right care products as consistent cleaning and touch-ups are necessary to stop the white looking trashed after more than a few outings; try the white versions of Kaps dye paint or Woly shoe cream.

From Dolly Parton to Jane Birkin, Yoko Ono and Bianca Jagger, some of the world's most stylish women (at all ends of the taste spectrum, admittedly) have embraced the white boot in their time. But I don't think this is a look that benefits from nostalgic inspiration. After all, Birkin wore her thigh-high go-gos with little more than a body suit and a basket bag, so I doubt we'll all be rushing to replicate that take.

No, it's to the street style set that I'm looking to for my next dose of white boot inspiration; Scandi style leader Pernille Teisbaek has been wearing pointy versions with grey wide-legged jeans or skinny black trousers and tweed blazers while Katherine Ormerod makes me want to try a knee-high version with a pretty tea dress.

Though the cowboy boot is a debate we'll have to save for another day. On the sleek elegance and infinite usefulness of a white boot however, how can you resist