If you’ve ever used a fork to crush your mashed potatoes, then you know. It doesn’t quite cut it. Fact: The creamiest mashed potatoes can only be achieved with one of the best potato mashers. Luckily, when shopping around for a potato masher, you’ll find a few stand out models that are universally lauded by critics and foodies alike.

Most potato mashers are designed with one of two types of handles: either a stick or a horizontal handle. Of the two, horizontal handles are generally easier to grip since they’re shaped like a handlebar and you can clutch them with your whole palm. They also allow you to press down on them with your maximum upper body strength, which can take some of the effort out of the endeavor. But, stick handles can still get the job done and will take up less space when you need to store them in your kitchen.

There are also two common types of mashing surfaces, perforated plates and wired, zig-zag-shaped heads. To make a short story even shorter, perforated plates are harder to clean, but better at mashing potatoes. Ultimately, the right masher for you will depend on your personal preferences.

And, if you want to take it one step further, consider a potato ricer. These make fast work of crushing potatoes by pressing the potato into a perforated surface using a crank to mash it up.

But, these potatoes are not going to mash themselves. Keep scrolling for the best potato mashers.

We only recommend products we love and that we think you will, too. We may receive a portion of sales from products purchased from this article, which was written by our Commerce team. 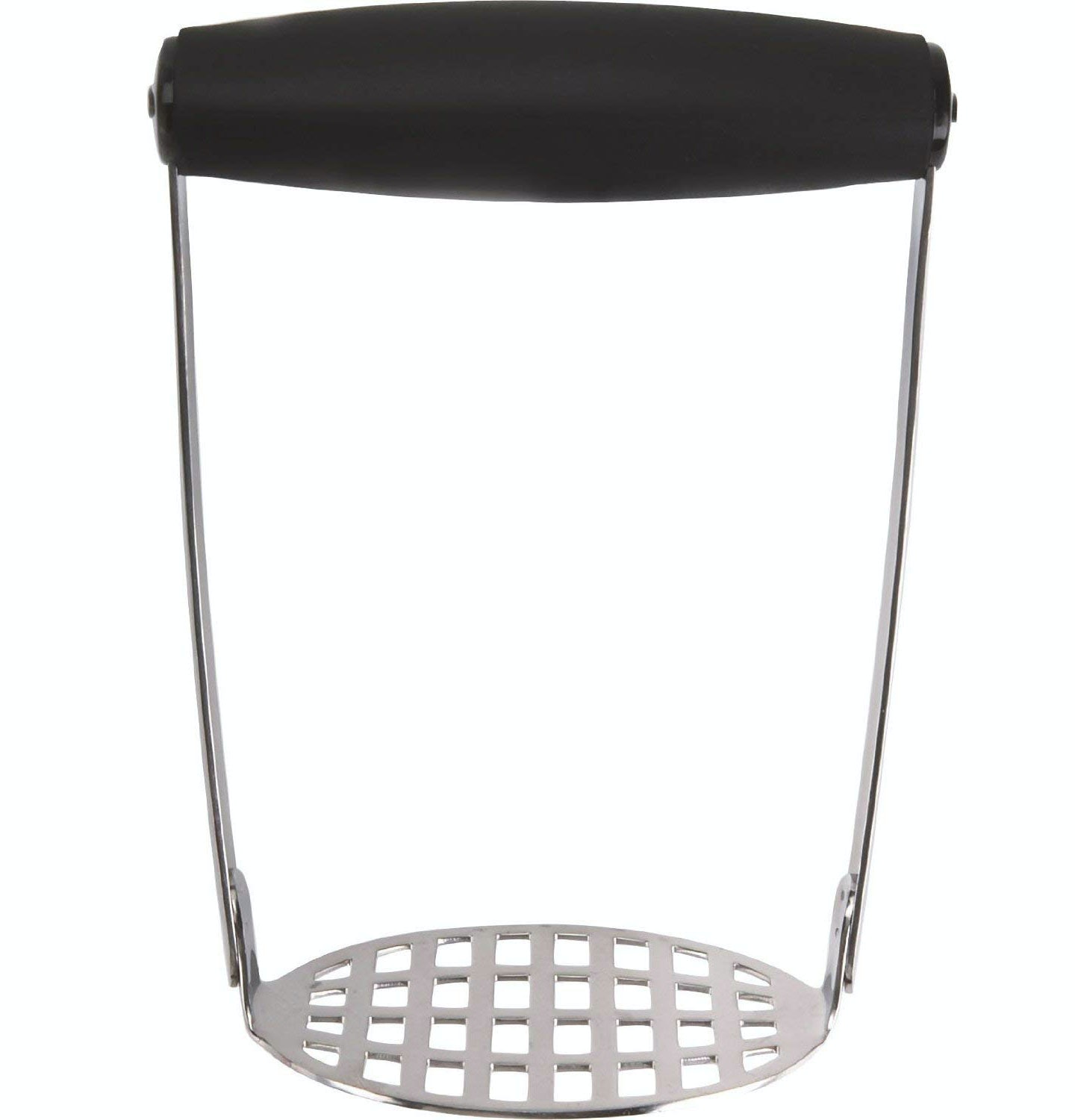 For the most effortless mashing experience, this stainless steel potato masher is the way to go. Not only does the fine-grid plate make it easy to use this on potatoes, but it can also work through produce like squash, pumpkin, and even cooked apples. The horizontal handle allows for more control when you’re mashing, and reviewers even remark that it’s the perfect height to give you great leverage when pressing down on your potatoes. Best yet, the entire kitchen tool is dishwasher safe for easy cleanup.

But, don’t take my word for it. Nearly 2,000 Amazon reviewers have weighed in. One fan says, "Less pressure, pain and blood sweat and tears this masher will give you what you want…….smooth mash potato without developing a hernia. I have owned one for some time and it is a joy to use so I purchased a second one for a family member who was struggling with the old fashioned vertical handle…..an instant hit! This is great especially if you are relatively small or not very strong and it will make mince meat of any potato!" 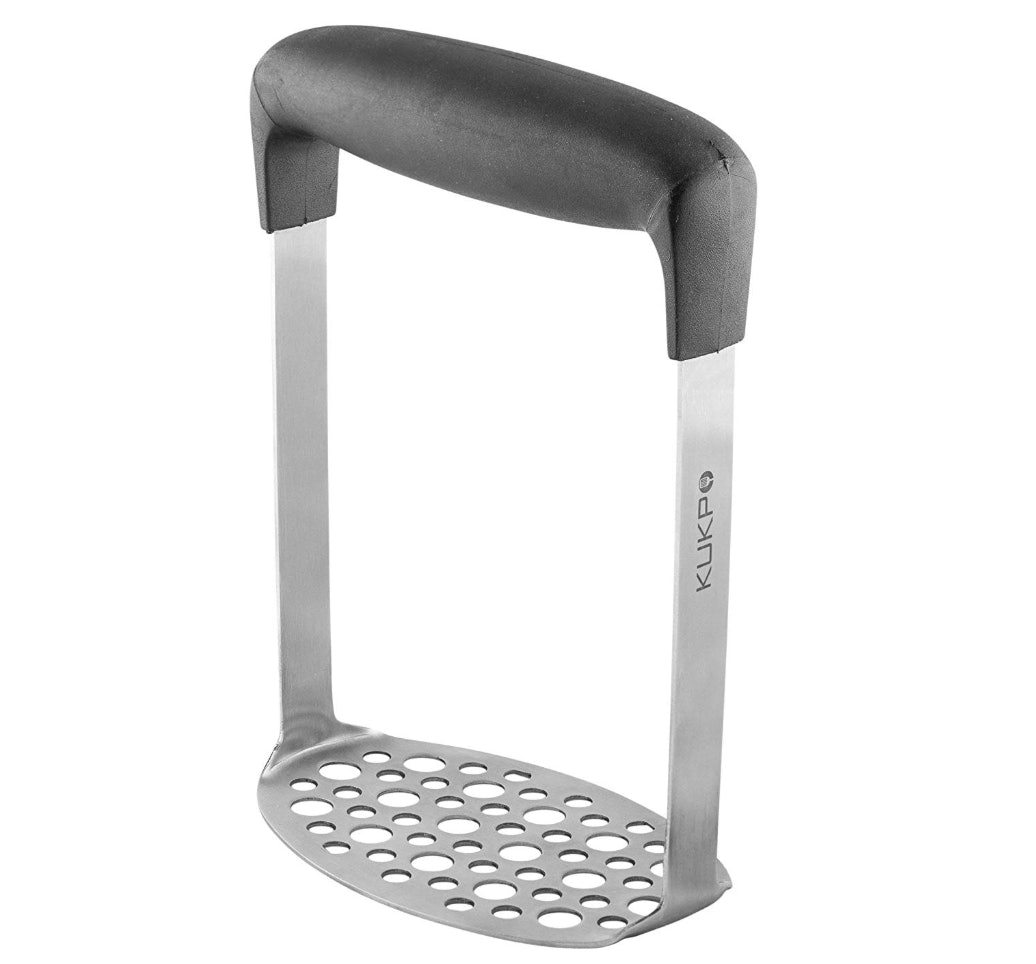 This fan-favorite potato masher has a lot of the same features the best overall does: a stainless steel, gridded mashing plate, an ergonomic handle, and glowing reviews from cooks who have tried it out and love it. It’s also dishwasher safe (more on this in a second) and can crush all manner of veggies. While this masher is a bit more affordable than the one above, some reviewers report that it might rust after a few trips through your dishwasher. For a longer-lasting masher, you’re better investing the extra money up front. One Amazon reviewer says it best, "I love this potato masher! It is easy to grip the bar across the top, and the holes are just right for getting almost all the lumps out (we actually prefer having a few small lumps left)." 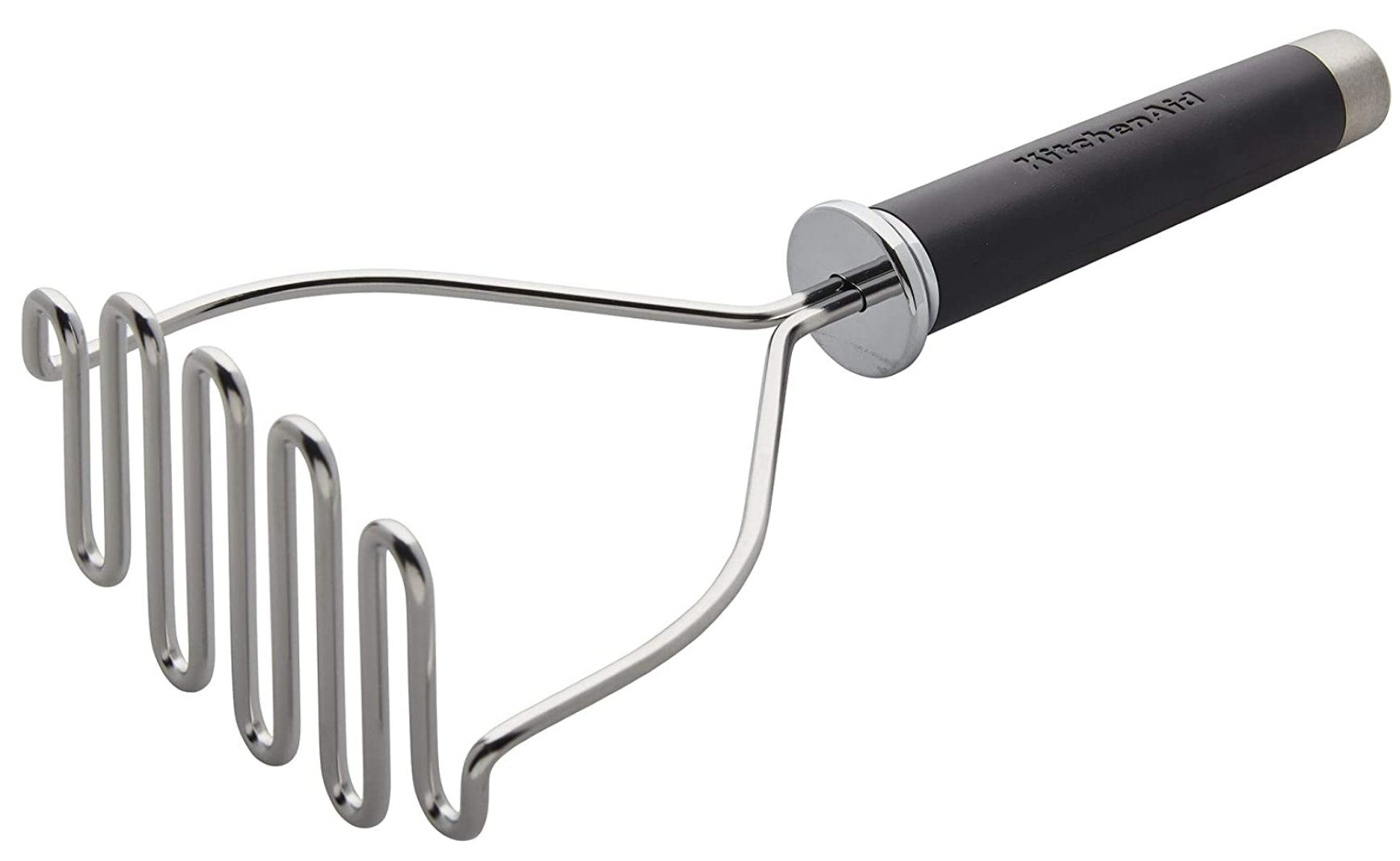 While wired mashers require a bit more effort than a gridded mashing surface, they can still mash up nearly anything. And this masher boasts a near-perfect, 4.8-star rating on Amazon with nearly 5,000 fans weighing in. The large, soft handle is ergonomically designed to give you extra control over your mashing. Even better, it’s dishwasher safe.

One reviewer raved, "I know it seems like a dumb thing to care about, but we bought this to replace our previous masher which started rusting in the dishwasher and had to be hand washed. This has a great grip, does a great job (I prefer the curved mash surface to the squared), and has held up through several runs through the dishwasher and still looks brand new." 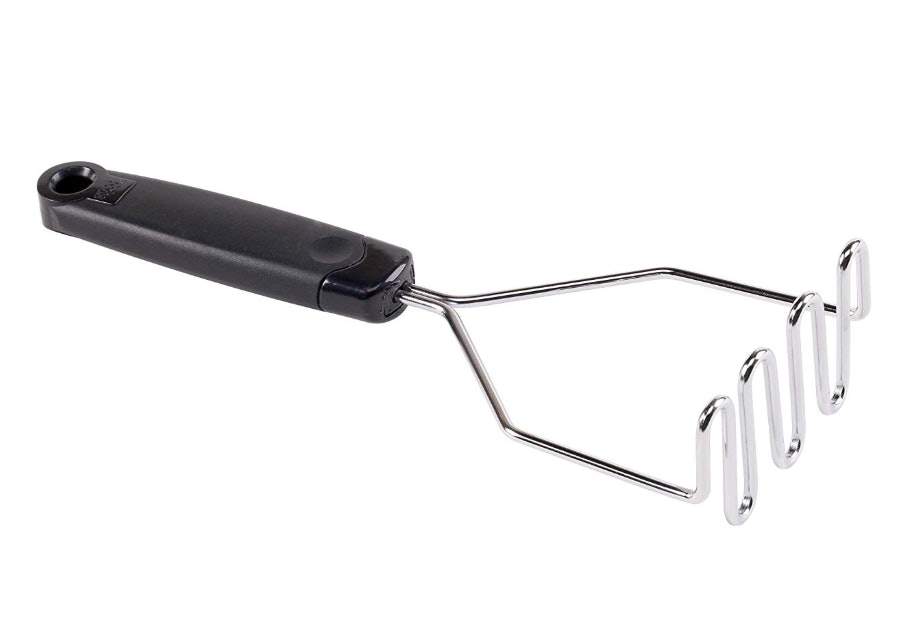 This potato masher is a great wired head option worth your money, but lacking a few features you’ll find in some of the options above. First, this is made of chrome, not stainless steel, making it a little more susceptible to rust, especially when you put it in the dishwasher. Secondly, because it’s less sturdy than other mashers on this list, you’re better off saving this one for smaller jobs or precooked potatoes. One fan puts it best, "After my potato masher from the 70’s finally broke, I purchased this one as a replacement. I am in love with how streamlined this thing is. I can actually put it in a drawer without an ongoing wrestling match with the other utensils!"

You May Also Want: A Ricer For The Creamiest Mashed Potatoes 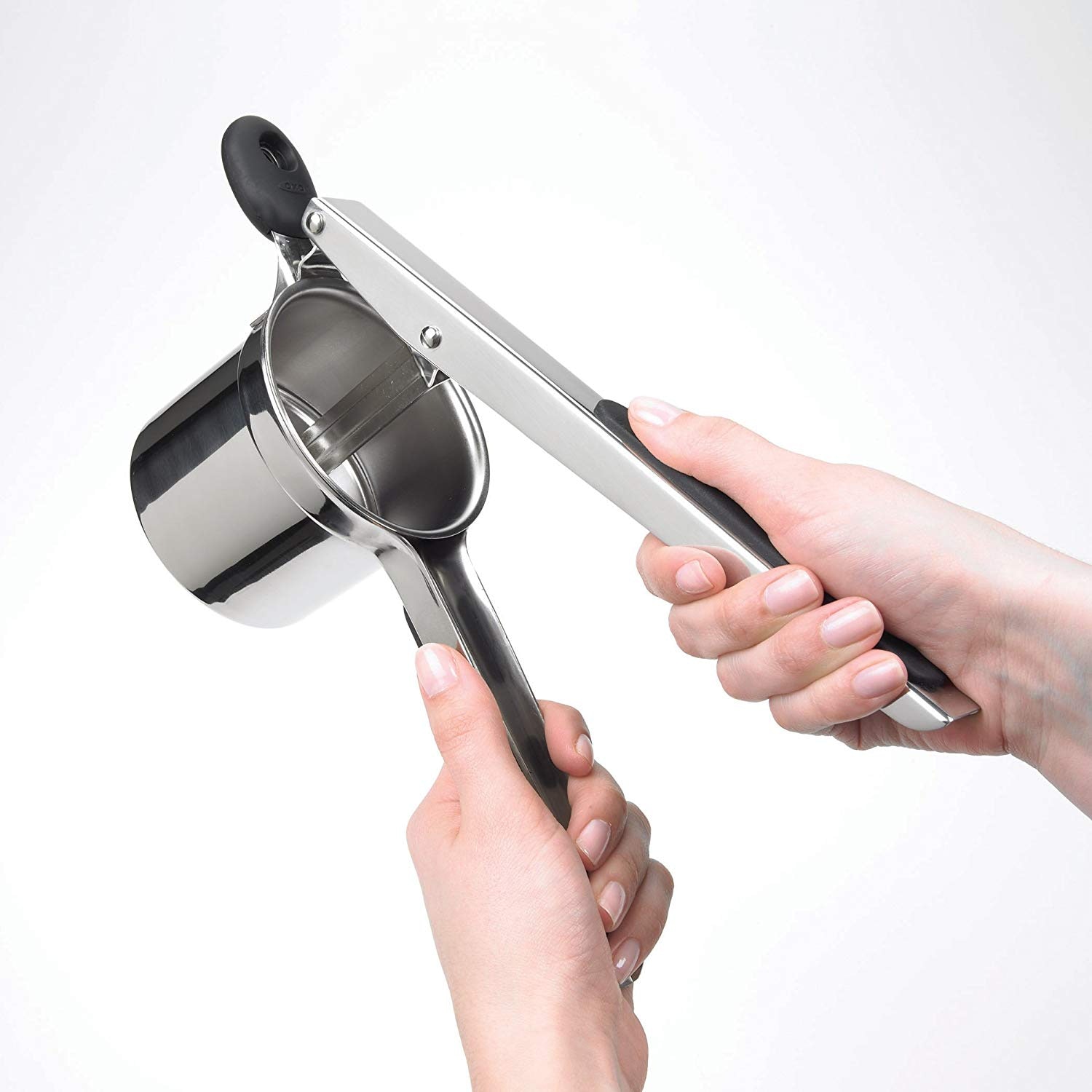 One step up from a masher is a potato ricer, like this one from OXO. How it works: Simply place a bowl underneath the ricer, put the potato into the chamber, and push both handles together. The ricer will clamp together and push the potato through the grated bottom. While it comes at a slightly higher cost, this fan-favorite kitchen tool can powerfully mash through potatoes in one simple push. One thing to note, reviewers recommend cutting up the potato into a few smaller pieces before putting it in the ricer.

One reviewer raves, "We have three ricers (this was for our daughter), and it’s better than any of the others, which include a chromed-steel model that rusts, an aluminum that can’t be put in the dishwasher, and a stainless model that has rusting hinges."

This article was originally published on March 19, 2019