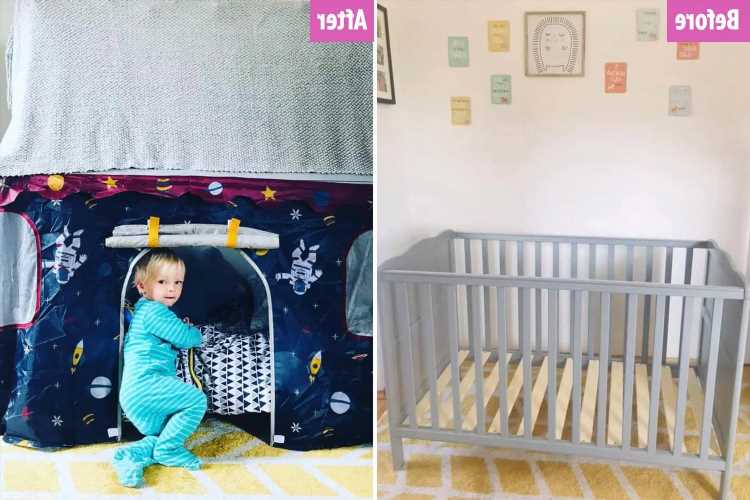 A MUMtransformed her son's old cot into incredible play tent in just two hours – and it cost her NOTHING.

Anja Lindemann, 34, lives in Germany with fiance Brian Hobart, 55, and their son Leo, who turns two in September. 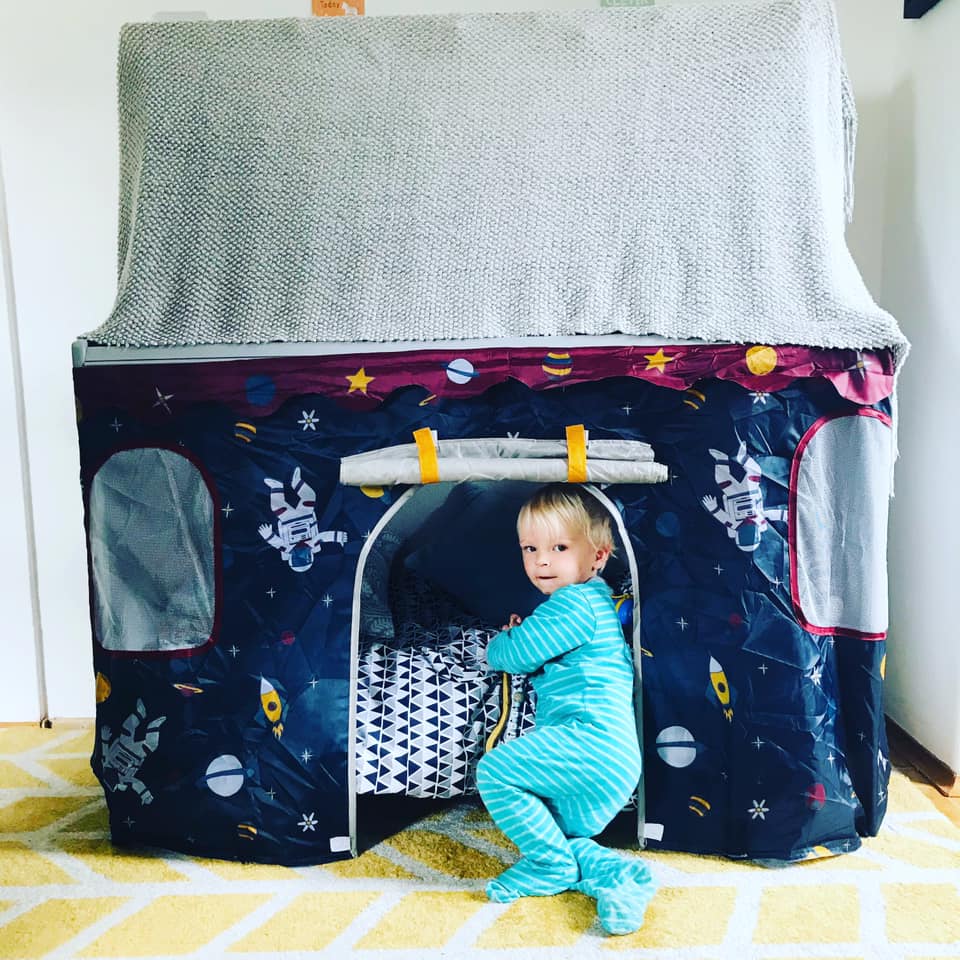 While Leo loves his cot, the adorable tot had recently started trying to climb out of it, leaving Anja worried that he might hurt himself.

DIY enthusiast Anja decided it was time to replace it with a house bed but was shocked to discover that it would cost up to £300 – without a mattress.

After recently relocating to Germany from the UK, Anja and Brian are on a strict budget and so decided to upcycle the cot instead, using Leo's old one along with materials they had lying around the house.

In just two hours, Anja turned the old cot into an incredible new play tent complete with a bed, fairy lights and its very own window and door. 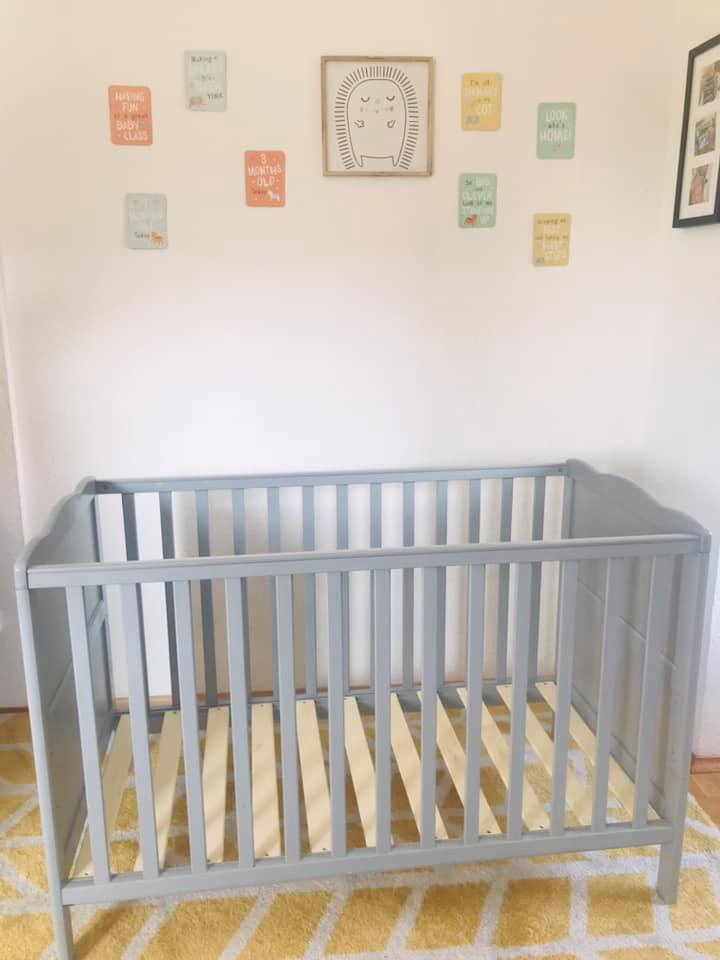 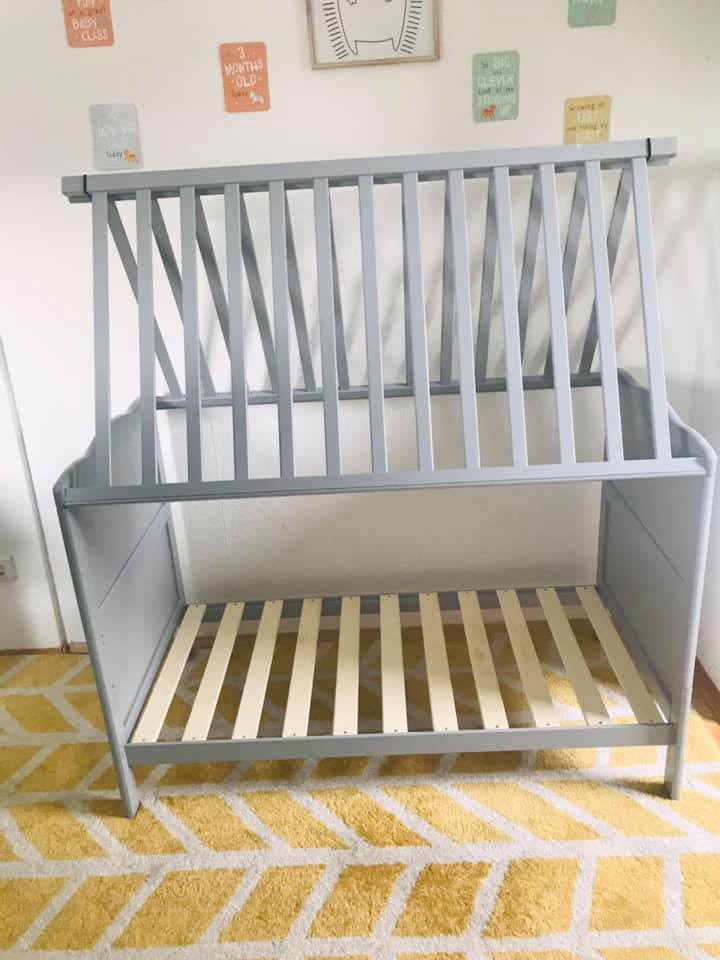 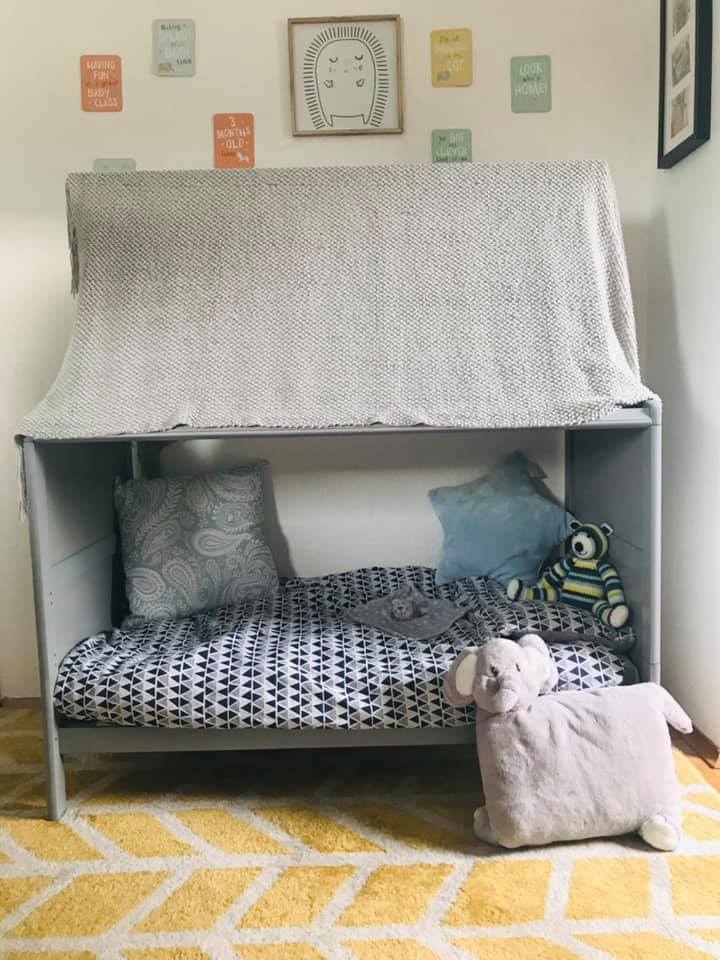 Anja shared the finished result to Facebook, and the post was quickly inundated with 12,000 likes and over a thousand comments.

One person wrote: "Wow that is amazing, absolutely love it. Very unique."

Another said: "That's brilliant you should be proud of yourself."

"Wow, it’s amazing. I will do the same for my little one, he will love it," another Facebook user commented.

"I decided to make the new bed three days ago because Leo had started trying to climb over the sides and it was a bit dangerous," Anja told Jam Press.

"I had seen a lot of these tent-style house beds online but after seeing how much they cost, I thought 'why not make it myself.'" 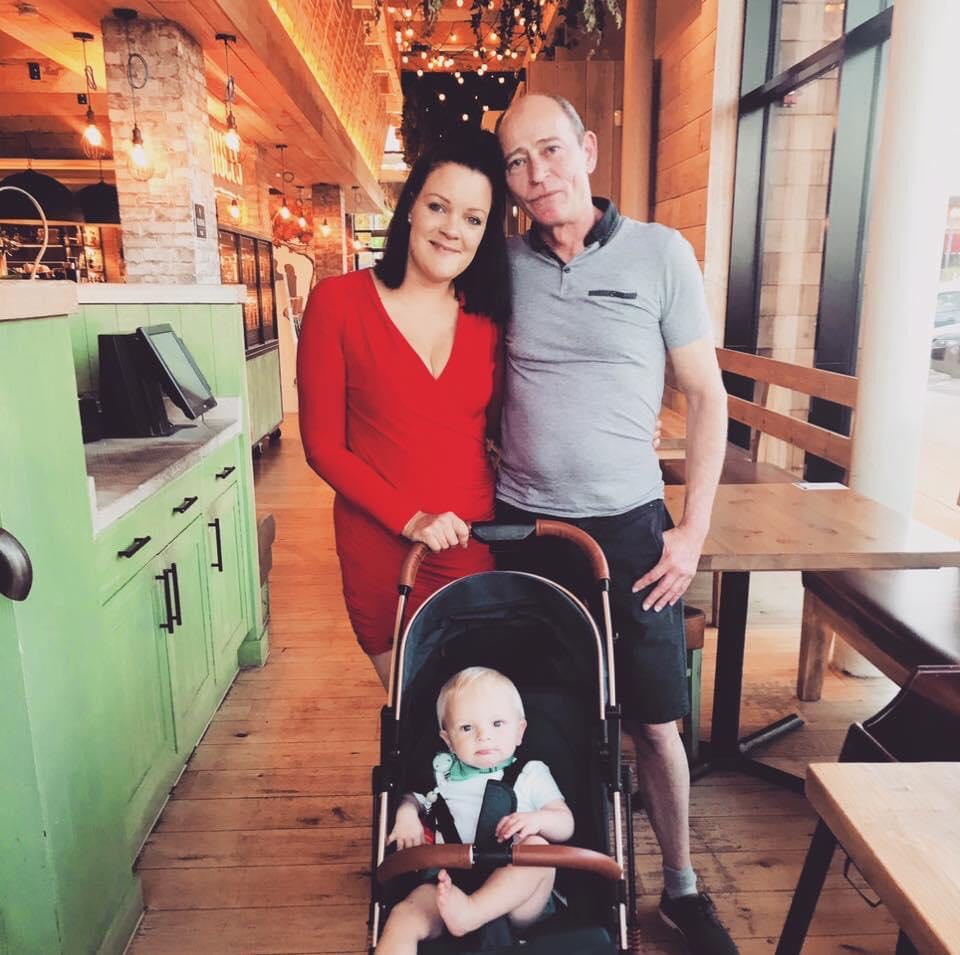 Anja and Brian began by completely stripping the cot out, taking off the side rails, and lowering the mattress base so that it was closer to the floor.

They then re-used the rails to make an apex "roof" section – using the same screws, nuts, and bolts to secure it in place.

Once that was done, the couple considered buying some plywood to make the "roof" of the new bed but, being on a budget, the couple decided to utilise an old throw instead.

Anja said: "We secured the old throw in place instead but it's detachable which means we can also take it off and wash it if we want to.

"I then added some fairy lights inside for Leo and then we used an old Astronaut sheet, which was originally from an old play tent, to make the outside.

"We cut away the excess material that we didn't need and secured it in place using velcro – it even has its own window and door." 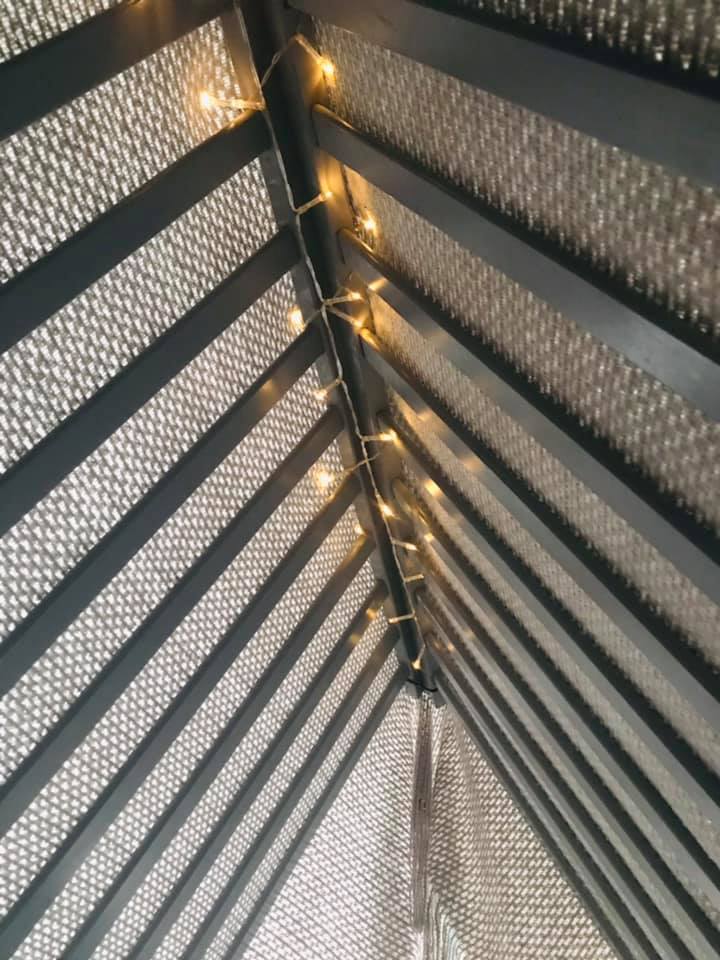 The whole thing was made secure with some tights screws, meaning little Leo can have as much fun as he likes in it without any risk of it collapsing.

More importantly – it cost them absolutely nothing.

Anja and Brian are over the moon with the finished result and admit that the whole DIY project was "pretty easy."

Anja said: "We are both happy with it and it wasn't that hard to do.

"More importantly, Leo is super happy and he's safer now, he has more freedom too as he was getting frustrated trying to climb over the rails of his own bed.

"He can't get enough of it.

"Now he can just pop in and out of his bed whenever he wants to which gives him more independence." 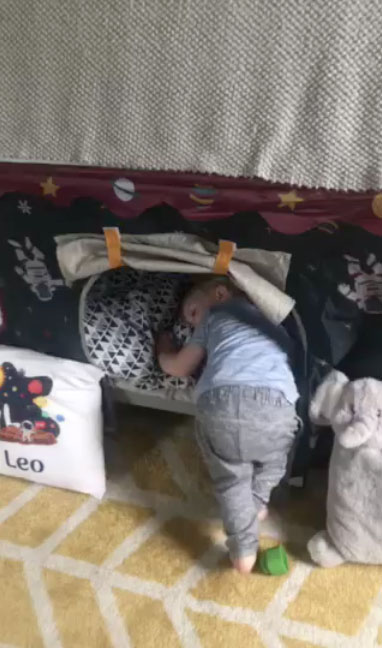 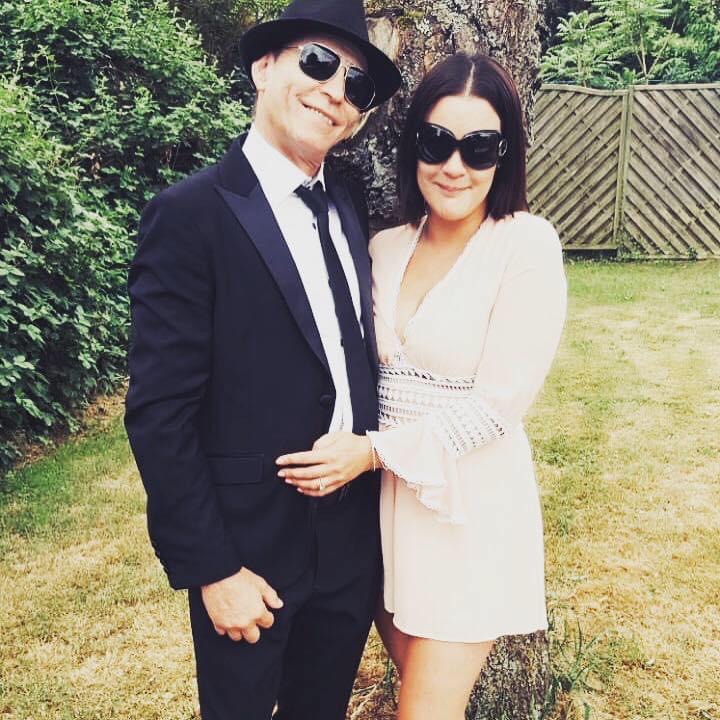 The couple is overwhelmed by the response their post received on Facebook and are happy to have inspired other people to make their own DIY beds.

Anja added: "I didn’t expect all this response, hundreds of mums have messaged me to say how great this idea was, I'm overwhelmed by the reaction.

"To me, it was such a simple idea and I didn’t spend a penny – it's like a brand new bed."

Meanwhile, a savvy mum who put away £25k in a YEAR shares easy budgeting tips for 2021 so you can too.

And a mum transformed £5 playhouse she bagged on Facebook marketplace with Wilko & The Range bargains- and it looks incredible.