The Queen’s oldest granddaughter, Zara Tindall, joined her brother and cousins in the vigil of the grandchildren at Westminster Hall last night. 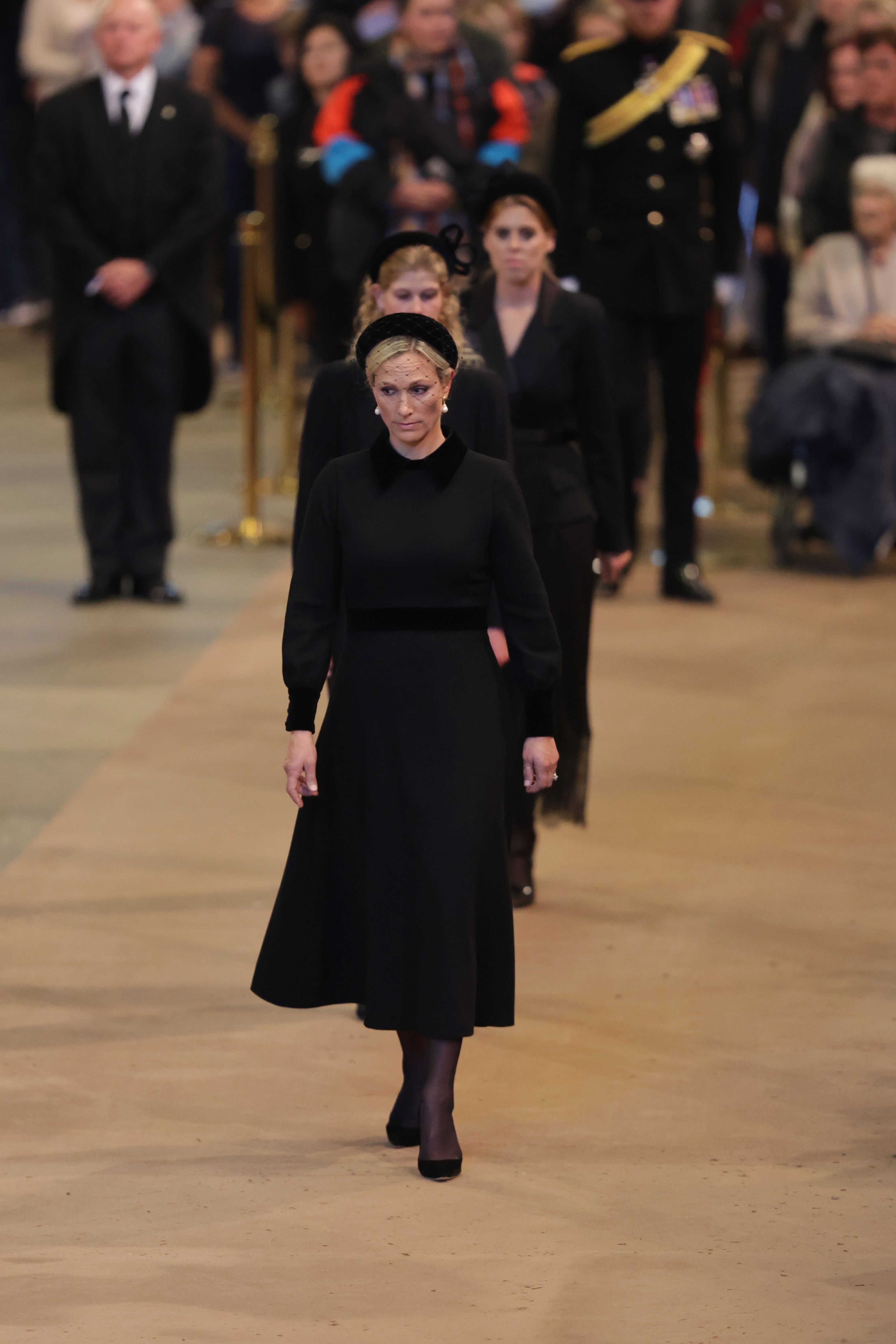 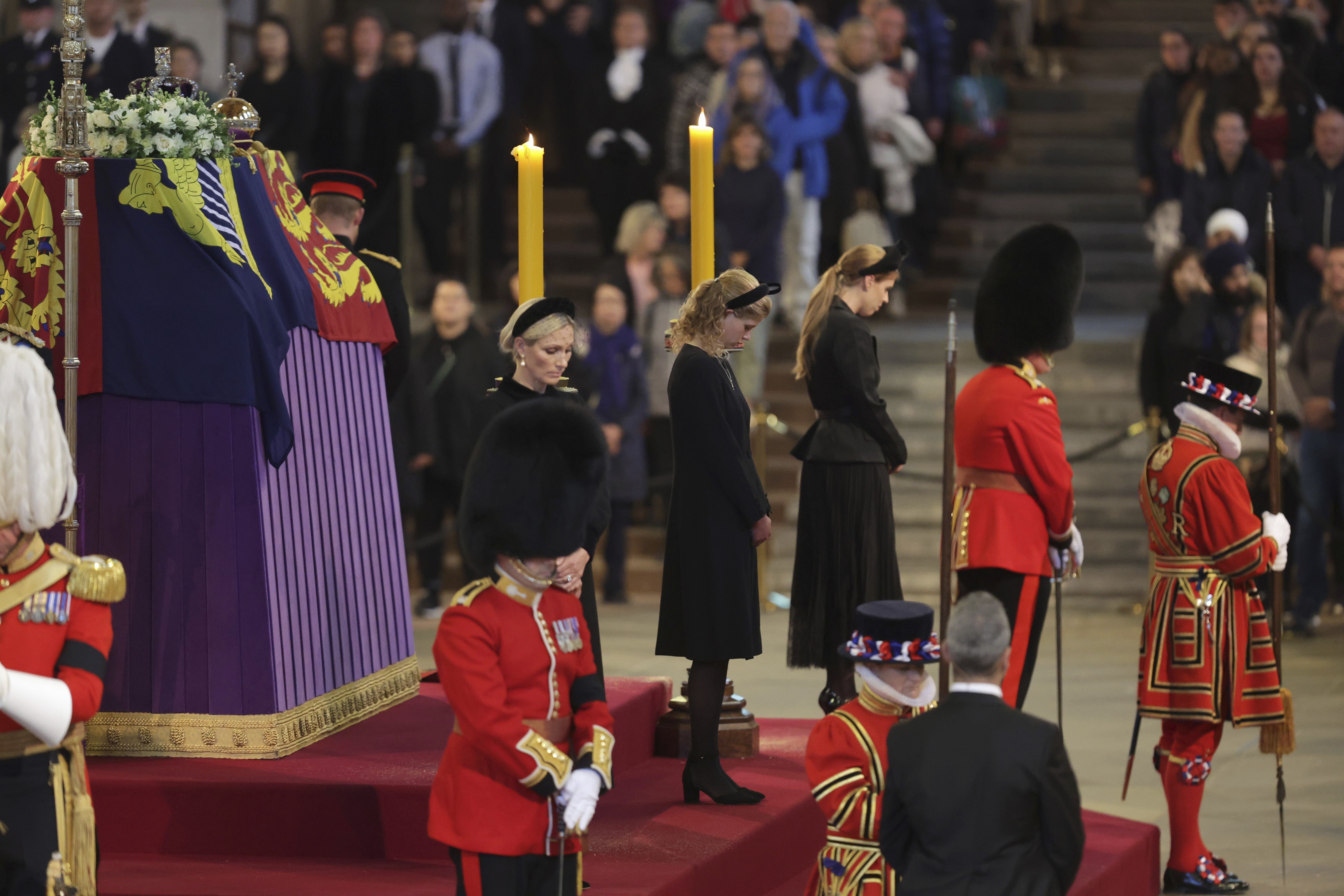 All eight of the late monarch’s grandchildren stood vigil around the coffin for 15 minutes, as other emotional mourners continued to file past.

As the group walked up the stairs to exit the hall Zara could be seen to stumble, with many suggesting that her shoe came off.

She could be seen sharing a quick smile with her cousin Lady Louise Windsor before reaching down to place the heel back on, while the other grandchildren patiently waited before continuing to exit.

Royal fans have praised Zara for quickly regaining her grace in this “totally relatable” moment.

Lady Louise Windsor paidtouching tribute to her grandparents during vigil 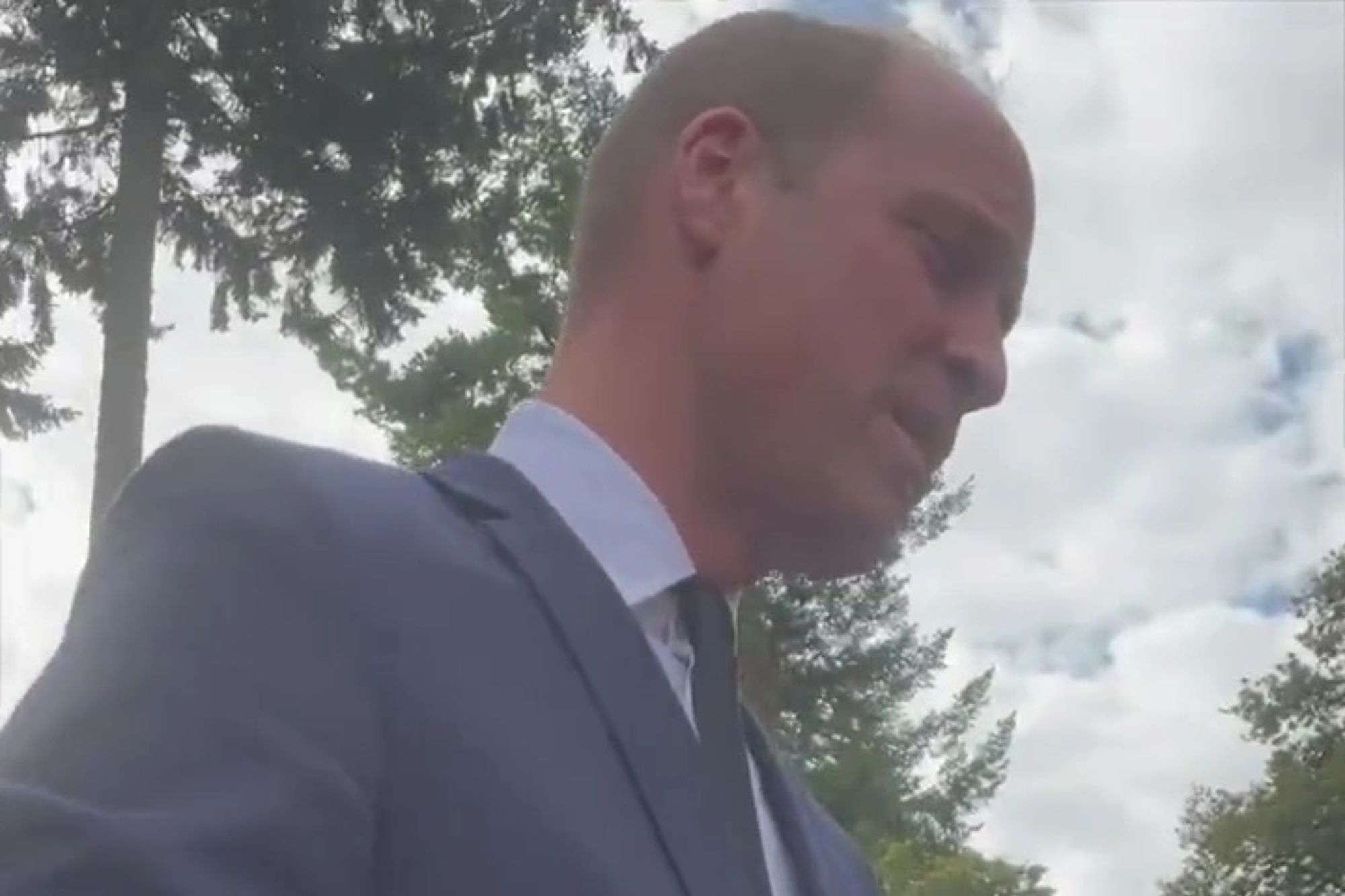 Taking to Twitter one fan wrote: “I was crying until Zara lost her shoe going up the steps. Totally relatable moment that made me smile.”

“Zara looking like her feet were killing her walking away and losing her shoe walking up the stairs. So relatable, real people going through a horrible experience and showing us how amazing our Royal family is”, added another.

A third joked: “Zara lost her shoe? Or got stuck on something? I feel you. That would be me. I’d fall and ruin everything.”

Others heaped on the praise, with one writing that this moment “lightened the moment and made things more real”, and another said that Zara dealt with the situation in “good grace.”

The Queen’s grandchildren arrived for the vigil last night to stand guard at her coffin.

They were led by Prince William who was flanked by Zara, and her older brother Peter Phillips.

At the other end of the coffin were Prince Harry, Princess Beatrice, Princess Eugenie. Lady Louise Windsor and her brother, James, Viscount Severn stood in the middle.

Most of the grandchildren wore black mourning clothes, with the exception of William and Harry, who wore military uniforms.

Lady Louise Windsor paidtouching tribute to her grandparents during vigil

Viewers all say the same thing about Queen’s grandson, 14, during vigil 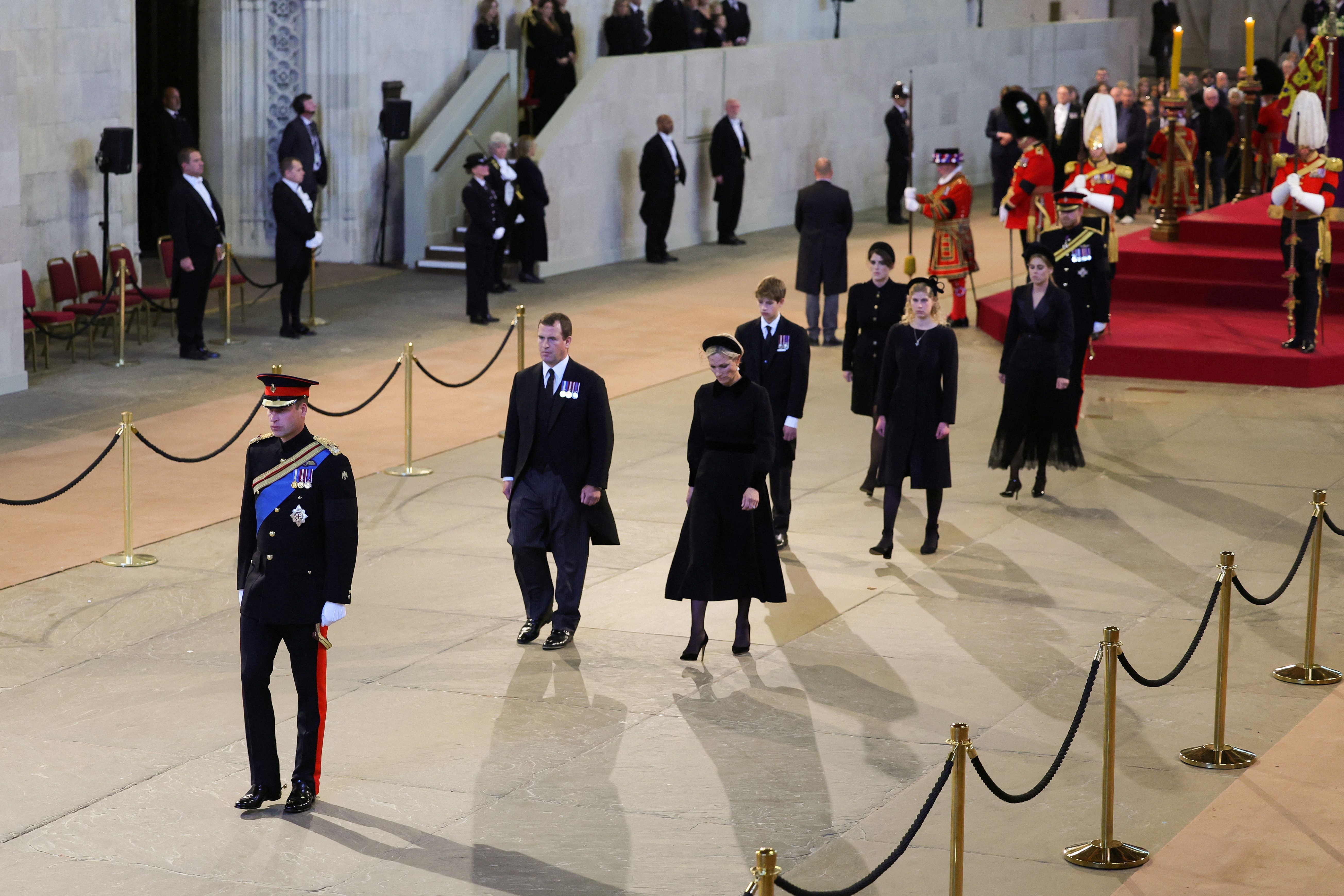 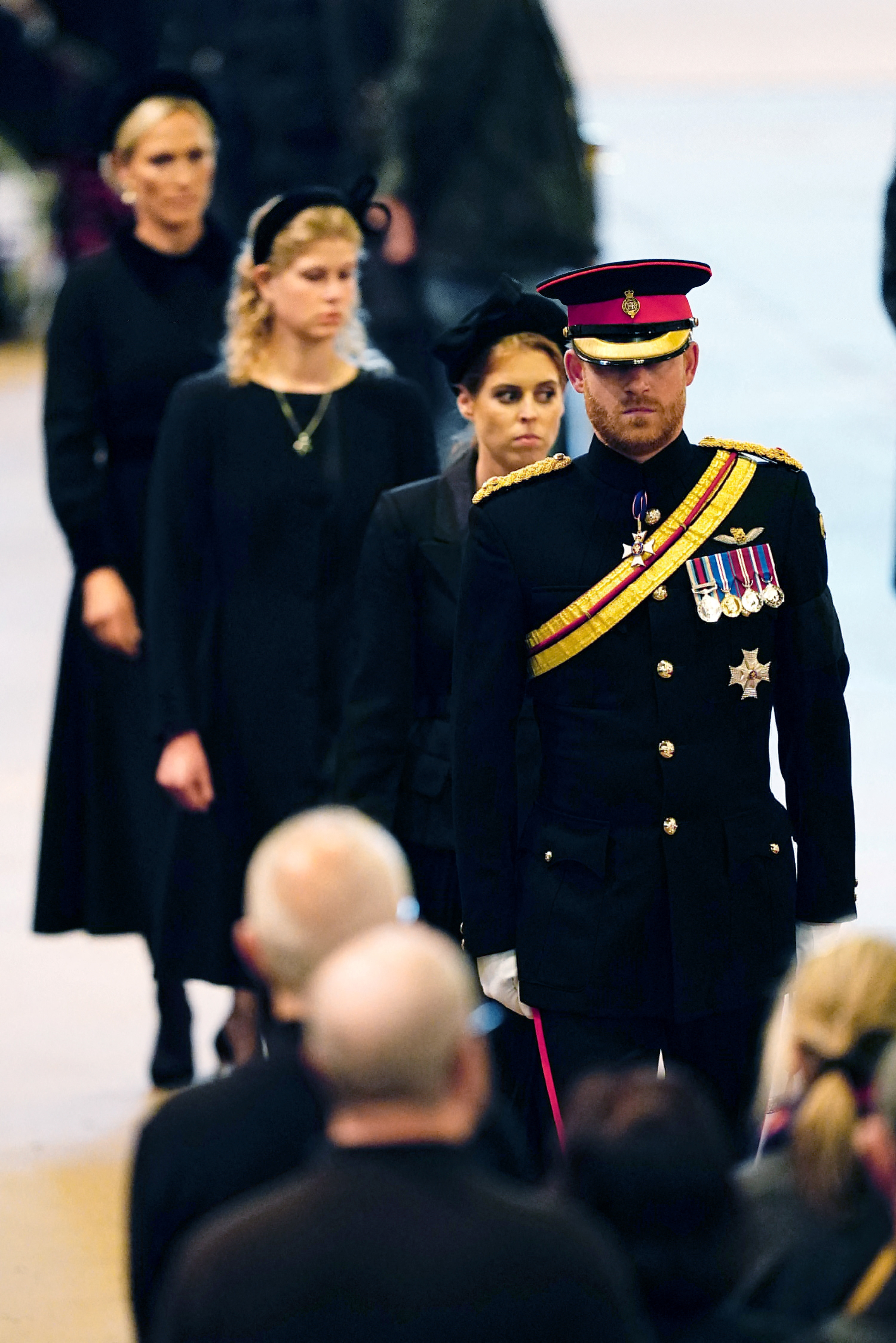