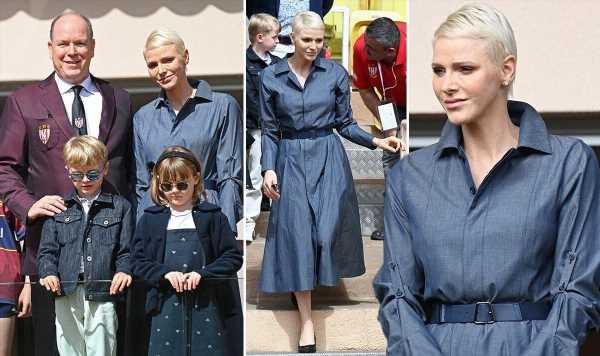 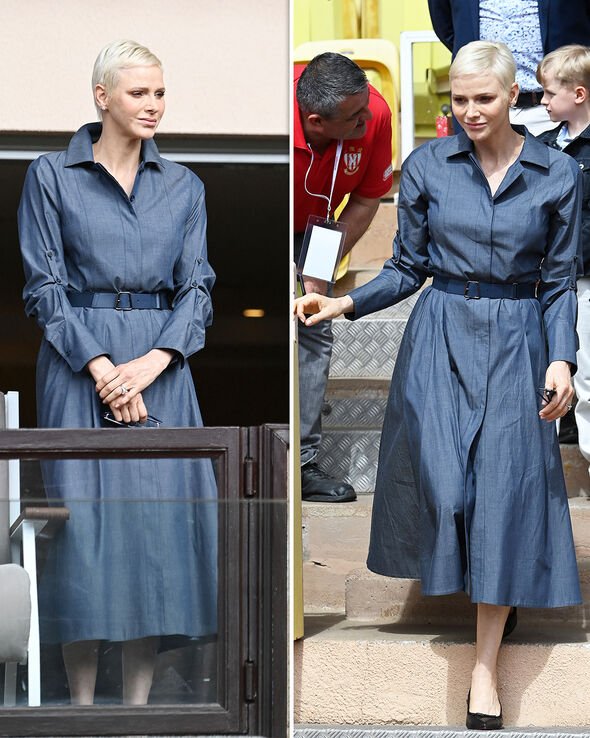 Princess Charlene of Monaco looked chic in the long sleeved blue dress today. She was seen at the Sainte Devote Rugby Tournament in Monaco.

Princess Charlene was joined by her twin children  Prince Jacques of Monaco and Princess Gabriella of Monaco, both seven.

She was also with her husband Prince Albert of Monaco.

Princess Charlene was co-hosting at the tournament and wore a showstopping look for the occasion.

The royal sported a blue dress with long sleeves and buttons down the front.

The dress had a large collar and she left the top button undone.

Princess Charlene showed off her svelte figure with a thin navy belt which pulled her in at the waist.

The dress continued below the belt into a long pleated skirt which cut off above the ankles.

In some photos, the royal was seen wearing a pair of large black sunglasses.

She took these off a number of times during the outing to show a glam makeup look.

This included lashing of mascara, a slick of bronzer and a nude lip gloss.

The mother-of-two wore her short platinum blonde hair swept to the side of her face.

She had on a pair of silver earrings and her large engagement ring was on show.

This was a rare outing from the Princess following a number of health issues recently.

She stayed out of the public eye as she was stuck in her native South Africa after contracting a serious sinus infection.

Princess Charlene has only made one other public appearance this year.

This was last week when the 44-year-old was seen at the ABB FIA Formula E World Championship in Monaco.

One shared their appreciation of seeing the family back together.

They simply wrote “reunited” with a love heart emoji.

Another added: “super photos, I adore.”