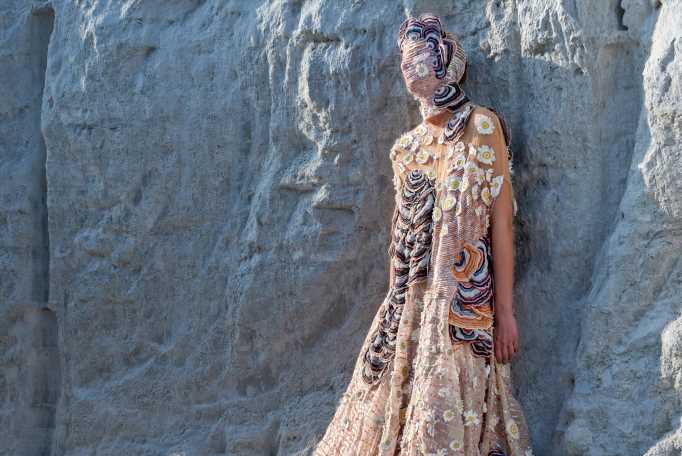 Nature abhors a vacuum, as the saying goes. With his third couture collection as a guest member of the Paris calendar, Rahul Mishra looked to Mother Earth’s incredible ability to regenerate herself in seemingly barren landscapes, continuing his commentary on the climate crisis.

Observing how plant life springs forth from desolation, he created protuberances of fungi with his signature 3D embroideries. They grew out of his dresses as if from a decaying tree trunk in a collection that, while perhaps lacking the ethereal beauty Mishra excels at, was nonetheless breathtaking, even viewed on a screen.

(Who knew mushrooms were so inspiring? Iris Van Herpen also based her spring couture on fungi.)

Mishra’s lifelike embellishments, informed by his design training before he branched into fashion, he said, imitated the shapes and colors of polypores – or bracket fungi – undulating in waves of color.

Short shift dresses, long gowns and jackets emanated layer upon layer of their banded forms. Each conk was individually designed with its own pattern, the stiffness of its embroideries determining its shape, before being stitched onto a glass organza base. “It’s not a linear process of pattern-making,” Mishra explained. With vivid reds, purples, blues and oranges, it seemed almost impossible that such creations could mirror nature, but a look at the photos in his inspiration booklet proved otherwise.

His mushrooms’ striped motifs were reprised in two dimensions; vertically on the top of a shift dress; horizontally on the tailored top of a flowing jacket dress, worn over sequined palazzo pants; or in rippling waves evoking the irregularities of nature – or the age rings of a tree – on flou designs. A return to a more fertile environment was evoked by way of scatterings of wild flowers, embroidered onto organza layers, their petals conjuring the shapes of hemlines.

He shot his designs against the stark backdrop of a marble dump yard near Jaipur, a desert-like landscape rendered sterile by years of intervention by man, like new life forms emerging against the odds from amidst the dust.