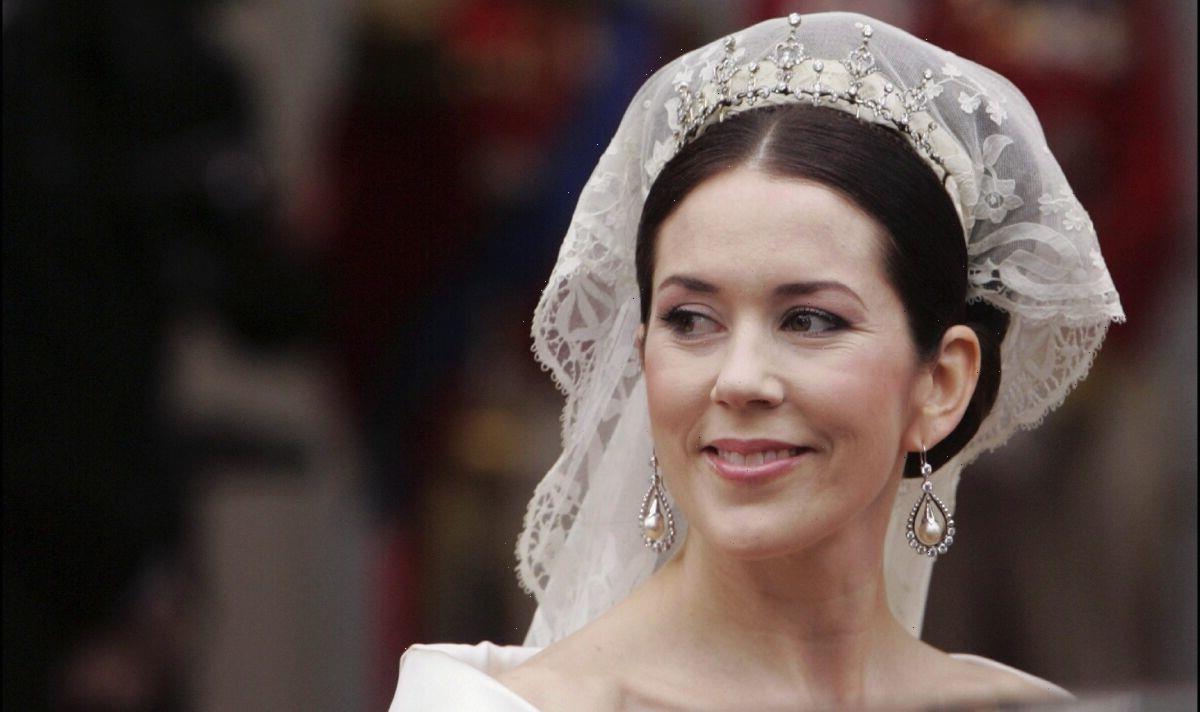 The people of Denmark were very excited in 2004 to celebrate Crown Prince Frederik marrying Crown Princess Mary, an Australian girl he met at a bar during the Sydney Olympics. Events leading up to the wedding included a boat race, a rock and roll concert, receptions, and two tiara events. But what did Mary wear?

The scoop neckline just touched the shoulders before descending into sleeves that wrapped the arm like a lily.

These were dubbed “calasleeves” by Mr Frank, which were placed above a slim-fit bodice.

The waist itself is very simple, but with a sentimental touch on the inside.

But why was Mary’s wedding day tainted with sadness?

Mary’s mother sadly could not make her wedding day as she tragically died in 1997. The new royal, therefore, had her mother’s wedding ring stitched near her heart on her wedding dress.

Her bouquet, which included eucalyptus to honour her Australian roots, was taken to Scotland to rest on the grave of her mother and grandparents by an aunt after the wedding.

The most unique feature of the dress was Mary’s skirt, where panels of satin opened from her hip to show eight meters of heirloom lace.

The Irish lace was another sentimental touch, this time honouring Frederik’s family. It was part of the original wedding gift to Crown Princess Margaret of Sweden (Frederik’s great-grandmother) which included the famous family veil.

Another 23.5 meters of satin were used to create the six-meter-long train. The whole affair was stiffened with heavy organza.

She anchored it with her wedding tiara, a gift from the Queen and Prince Henrik. Mary also wore new earrings of brilliant-cut diamonds set in platinum with South Sea Island pearls.

They were created by Marianne Dulong, a jeweller that has proved to be a firm favourite in the years since. Mary wore matching shoes with ribbon ties and had a handkerchief that was handmade by a Danish lace-making teacher.

Mary’s bridesmaids wore red to honour the Danish flag as they arranged her long train so she could walk down the aisle and say “I do” to her Prince.

Frederik and Mary first met at a Sydney pub called the Slip Inn when the city hosted the Olympics in 2000.

At the time, Frederik was relaxing with the Danish sailing team, and the pair immediately hit it off.

Frederik and Mary Donaldson started to date despite the long distance between Australia and Denmark, and after months of letters and phone calls, she decided to move from Australia to Denmark in December 2001.

On October 8, 2003, the couple became officially engaged, with Frederik presenting Mary with an emerald cut diamond flanked on either side by rubies.

This was a colour scheme that nodded to the Denmark flag, similar to Crown Princess Mary’s bridesmaid dresses.

Since their wedding, the couple has welcomed four children: Prince Christian, born in 2005, Princess Isabella, born in 2007, and twins Prince Vincent and Princess Josephine, who arrived in 2011.

Mary and Frederik live in Frederik VIII’s palace in the northeastern part of Amalienborg Palace in Copenhagen.