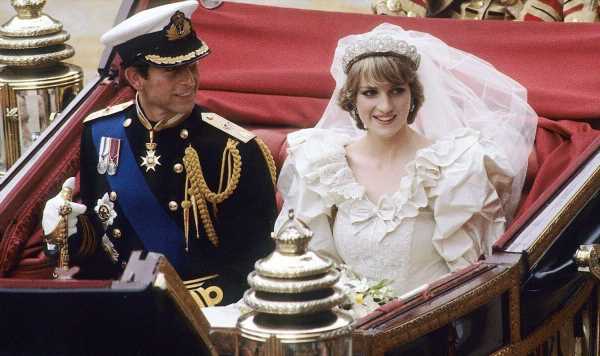 Princess Diana’s wedding dress was a triumph of 1980s style, and it is still cited today as one of the most popular wedding dresses ever. Diana’s gown was an explosion of fabric and ruffles, but underneath a concealed charm was added to the gown for a special reason.

Diana opted for a horseshoe brooch to be sewn into her dress, with horseshoes famously associated with good luck.

Sarah McCann, trends expert at luxury diamond jewellery company Diamonds Factory, said: “On the Princess of Wales’s wedding day to King Charles, it is reported that she actually had a little 18-carat gold horseshoe brooch sewn into the back of her wedding gown for an extra helping of prosperity on her big day.

“The horseshoe has been a common good luck charm in the United Kingdom since 969AD.”

The horseshoe brooch wasn’t the only secret detail in Diana’s dress, as she also incorporated her “something blue”.

A blue bow was sewn into the waistband of her dress, with the silk spun for the ribbon at a British farm.

On the bottom of her shoes, Diana had ‘C’ and ‘D’ initials separated with a love heart painted on the arches.

The shoes matched the embroidered aspects of Diana’s dress and featured heart appliques on the toes.

Preparations for the gown were conducted in secrecy due to intense public interest in Diana and Charles’ wedding at the time.

The Princess’ gown was made of ivory silk taffeta and antique lace and it featured a 25-foot train.

Diana also sported a long veil on the day adorned with thousands of mini pearls.

The nature of the fabric of Diana’s dress meant there were some crinkles when she emerged from her carriage at St Paul’s.

But these were smoothed out, and the gown’s train and veil were carried by Diana’s trusted bridesmaids into the historic landmark.

With British weather often unfavourable, a special umbrella was also crafted to match Diana’s dress but it wasn’t required.

For her foray down the aisle, Diana opted for the sparkling Spencer Tiara.

A family heirloom, the Spencer Tiara was worn by Diana’s older sisters at their respective weddings too.

Diana is thought to have worn the Spencer Tiara rather than one from the late Queen’s collection as a tribute to her family on her big day.