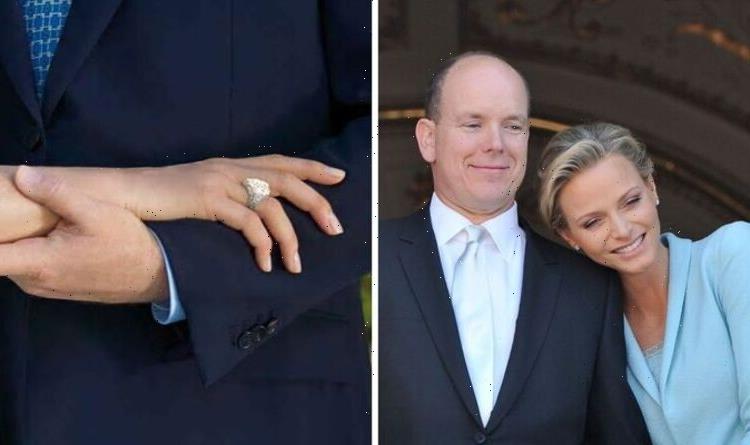 Princess Charlene of Monaco married Prince Albert more than a decade ago in 2011, but she only wears her engagement ring on certain occasions.

It features a pear-cut diamond at its centre and is flanked by smaller diamonds in triangle arrangements.

The unique pear-shaped stone is “very stylish and bold”, according to jewellers Rogers & Holland.

“They have a resemblance to an elegant teardrop with one pointed end and one rounded end – combining tradition and brilliance, pear shape diamond engagement rings are perfect for the bride who is drawn to excitement and the unexpected.”

But despite speaking to a bride who is drawn to “excitement”, the diamond is still a traditional stone, particularly for a royal engagement ring.

Love to Know stated: “The elongated pear shape shows a woman to be an individual, yet she still has a soft side for traditional romance.”

With this “unusual” shape, the proud owner of a pear-cut diamond may be classed as a “trendsetter”, which is unsurprising considering the princess’ sense of style.

Some of her most iconic fashion looks include a stunning floor-length white gown embellished with leaf motifs for the Princess Grace Awards Gala and a jaw-dropping floor-length silver sequin gown Monte-Carlo Gala for Planetary Health in 2020.

The price of the ring is unknown to the public, but the 3ct diamond ring is certainly fit for a royal.

The princess often swaps out her engagement ring for other ones, and is no stranger to a beautiful jewel.

During her wedding festivities, Princess Charlene was spotted in the awe-inspiring Infinite Cascade Necklace crafted from rose gold set with diamonds and pearls, made by Beirut jewellers Tabbah.

Tabbah described their jewel masterpiece: “The design of the necklace is imbued with fluid structure: ripples that at once wrap, as if to protect, the neck, while simultaneously cascading over the collar bone where the large pearls drop, their individual settings ensuring delicate sparkle and warm glow as they catch the light.”

At her wedding ceremony she wore diamond brooches in her hair, to complement her chignon hairstyle.

It featured a show-stopping 60cts of diamonds.

Princess Charlene’s engagement ring isn’t the only royal band to make headline for its unique quality.

The UK Royal Family is also home to some distinctive rings.

Princess Eugenie features an “incredibly rare” padparadscha sapphire that is “much rarer than diamonds” according to Maxwell Stone, diamond expert at Steven Stone.

He continued that this stone is so rare that “many people haven’t even heard of them”.

The Queen Mother also had an unusual engagement ring, initially receiving a Kashmir sapphire before swapping it for a pearl.