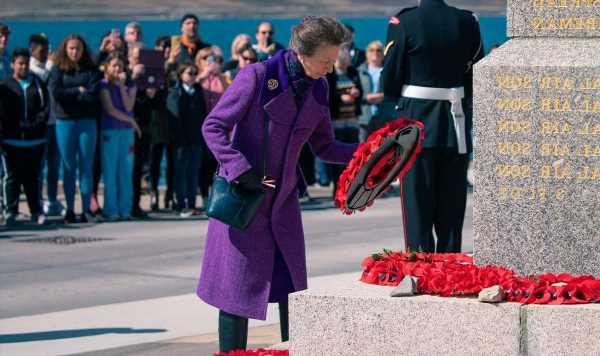 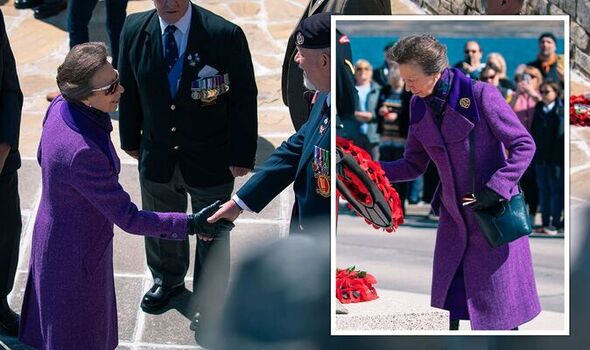 The Princess Royal was photographed as she laid a wreath at the memorial accompanied by her husband, Sir Tim Laurence. The couple is currently undertaking a six-day visit to the Falkland Islands and for today’s occasion, Princess Anne chose a very elegant purple coat.

Princess Anne donned a smart all-purple ensemble as she arrived at the ceremony. She combined the long coat with a purple dress underneath and black boots.

The royal was also carrying a black handbag, her favourite sunglasses and wore a purple and navy scarf. A gold brooch in the shape of a flower finished the Princess’ sophisticated look.

Princess Anne has worn the coat on other occasions, including when she and Queen Elizabeth attended an event together to celebrate the Royal British Legion’s landmark milestone.

Back then, she opted for the same wool coat with contrasting lapel detailing, which she wore over a simple dress, just like today. Princess Anne completed the look with a hat boasting ribbon and feather embellishment in purple.

According to an expert, Princess Anne chose this look following her mother’s “go-to fashion solution”. Personal stylist Annabel Hodin claimed that the royal often mirrors her mother through her fashion choices.

She explained: “There’s nothing ostentatious or too extravagant about her [Anne] wardrobe. Wearing a tailored silhouette in one colour head-to-toe is the easiest way to travel and dress well, and also the Queen’s go-to solution,” she told The Telegraph.

Princess Anne usually focuses on “practicality over studied glamour”, according to royal style expert Bethan Holt: “She seems to approach her wardrobe with the same attitude that she does her public role; unshowy but determined to do everything just right.”

“The Queen loves clothes and is a real expert on fabrics. I do think she values my opinion but she is the one who is in control. She always makes the final decision,” Queen Elizabeth’s former personal assistant Angela Kelly told the Telegraph back in 2019.

Tailored suits, monochromatic colour scheme and sensible footwear are all part of Princess Anne’s style which resembles her mother’s now more than ever.

The late Queen used to favour dresses or suits for her formal engagements and was often seen in matching hats and coats. This was part of Queen Elizabeth’s iconic style, as well as her vibrant colour palette.

In the 2016 documentary, The Queen at 90, Sophie, Countess of Wessex explained: “She needs to stand out for people to be able to say ‘I saw the Queen’.

“Don’t forget that when she turns up somewhere, the crowds are two, three, four, 10, 15 deep, and someone wants to be able to say they saw a bit of the Queen’s hat as she went past.”

Back in June 1988, Queen Elizabeth II and Princess Anne attended the Derby Races looking more like twins than mother and daughter.

The royal duo stunned in matching buttercup yellow ensembles as they turned up to the racing event. The look consisted of a yellow coat dress and beret. As is typical of the Queen, she wore a brightly coloured outfit that meant she could be spotted from far and wide.

And while Princess Anne is normally more understated with her fashion, on this occasion she followed suit and opted for a bold look just like her mother.

The expert said: “Zara is taking inspiration from her mother Princess Anne – the original wardrobe recycler of the Royal Family, and using her three key fashion lessons to dress up for any occasion: always look clean, presentable and tidy.

“Zara never fails to wear a statement-making hat with her colourful attire and has worn a number of eye-catching looks throughout the years. This is undoubtedly acquired from her mother Anne, who has a taste for patterns, figure-flattering fits, and subtle equestrian style references, and who has been influencing trends since before the 1970s.”