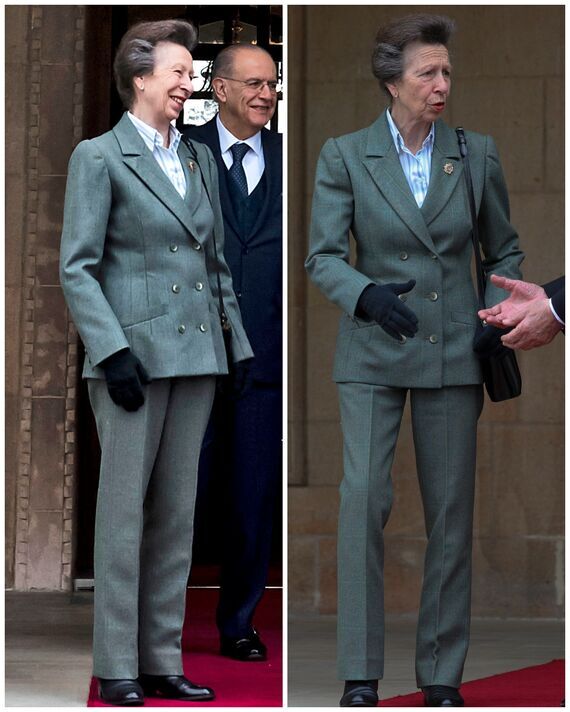 Princess Anne was greeted in Cyprus today by President Nicos Anastasiades at the Presidential palace in Nicosia, during an official royal visit. The Princess Royal later visited British soldiers serving with a United Nations peacekeeping force in an ethnically divided Cyprus.

Princess Anne looked incredibly dapper in a grey and green tartan suit with six buttons down the front of her tight-fitting blazer.

For footwear, the Princess Royal appeared to be wearing black boot heels to add some height to the Princess, whilst still looking professional.

She also wore some black gloves, which are something Princess Anne is rarely seen without.

Her Late Majesty Queen Elizabeth would often wear gloves, and Princess Anne is a royal who continues this tradition.

To continue with the black theme, Anne was seen carrying an across-the-shoulder black handbag.

Underneath her tartan suit, the Princess wore a blue and white striped shirt, which she stopped short of buttoning all the way to the top.

Overall, the Princess looked incredibly smart as she made her way to Cyprus for the important visit.

She appeared to be wearing the Royal Logistics Corps Lapel Badge, which retails for just £5.95 on Award Medals.

“The lapel badge can be worn purely ornamental or indicate yours or the wearer’s affiliation to The RLC.”

Princess Anne likely chose this brooch as she is in Cyprus to honour British soldiers serving with a United Nations peacekeeping force in an divided country, giving the jewel an important meaning.

She also styled her hair in the same way that she has had it for decades, a decision that was intentional by the Princess to always keep the focus on her charity work.

Princess Anne wore simple makeup for the royal visit but did wear bright red lipstick which is her usual colour.

“We are lucky to have Her Royal Highness representing us overseas.”

Royal watcher, @teck_maryroyal loved her style and commented: “Look at Princess Anne’s suit! she is such a bad***!”