At 152 centimetres tall and a size 22, Lori Swanton was used to not seeing a lot of women like herself in mainstream fashion and beauty advertisements. So she decided to do something about it.

Swanton, and her fellow curvy (and much taller) friend Jaimie Brasier created We Are Living Cute, an online community designed to celebrate diversity – of body, gender, sexuality, age, ethnicity and ability – as well as promote brands that are "doing the right thing". 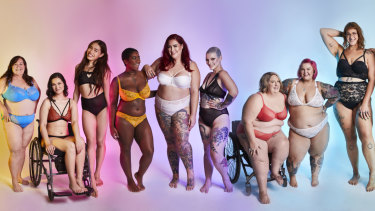 A section of the photo shoot conceived by Lori Swanton (second from right) and Jaimie Brasier (centre) of We Are Living Cute aimed at celebrating and promoting greater body diversity in advertising.Credit:Michelle Jarni

"As someone who has always been plus-size, I never saw people who looked like me [in campaigns]," Swanton, 27, said. "A lot of companies aren’t doing enough to show diversity."

The number of advertising campaigns featuring exclusively white, blonde, size 8 women is, thankfully, dwindling in Australia but Swanton said some brands still had a narrow definition of diversity.

"Even a large plus-size store only shows models on the smallest end of the spectrum of their sizing, and they all have flat stomachs, thin arms and legs," she said. 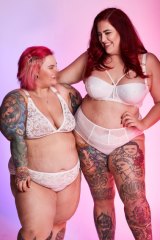 Lori Swanton (left) and Jaimie Brasier were fed up with what they deemed inadequate body diversity in fashion advertising.Credit:Michelle Jarni

"This isn’t OK. They are doing something great by extending their size range but in their advertising they are not showing people who look like a lot of their customer base."

After seeing a repost of a highly praised 2016 Target lingerie campaign that aimed to highlight body diversity, Swanton and Brasier put a call out via social media to shoot their own, more comprehensive, version of a body-acceptance campaign.

More than 150 people responded, offering to donate their time, services and product. In the end, the shoot featured 14 models ranging in size from 6 to 26, in age from 23 to 60 and across a range of gender identities, sexualities and ethnicities.

"There will be people who look at the photos and there may not be an exact representation [of themselves] but people will look at these photos and say, 'Wow, I can see a part of myself,'" Swanton said.

Katherine Taylor, director of the curvy modelling agency Bella Management, said there is a definite domino effect with brands showing greater body diversity but "it's still got a long, long way to go".

They are doing something great by extending their size range but … they are not showing people who look like a lot of their customer base.

The hope, she said, was that by brands such as Cotton On, Supre and Dotti shooting models across a broader range,"more high-fashion brands such as Alex Perry and Camilla will also jump on board".

Although there are no strict rules about diversity in advertising in Australia, the Advertising Standards Bureau handles complaints when ads are in alleged breach of industry codes covering issues such as sexual exploitation and all forms of discrimination.

Ads must also not "portray an unrealistic ideal body image by portraying body shapes or features that are unrealistic or unattainable through healthy practices", which would cover the use of, say, overly skinny models. However, the industry does not prescribe what constitutes adequate representation or diversity in advertising.

A spokeswoman for the Australian Association of National Advertisers said the industry has rules around excessive use of retouching and also the use of "unhealthy" looking models.

A spokeswoman for Target did not respond to a request for comment.

Swanton said the goal for the campaign is to spread awareness but ultimately she and Brasier would love to speak at schools and more widely about self love.

"It’s OK to have bad days," Swanton said. "It’s so important to love the person you’re looking at in the mirror."