Ev Bravado and Tela D’Amore’s Who Decides War SS2021 collection titled “A Still Small Voice” took us on a journey as models ascended upon various elements of nature. The name of the collection was inspired by 1 Kings 19:11-13, a passage in the bible that explores those elements including wind, rocks, and fire as well as natural disasters and landforms as the Lord passes by. Elijah, a prophet, steps out into the mouth of a cave, and the lord questions why he is there.

The production opens with views of water, mountains, and greenery as all of nature’s rhythms sound off. Various men are seen walking through the forest, waterfall, and a cobble stone castle.  “We chose the castle because of its grandness, it’s serenity.  The idea behind it is  that every person within it is making their way to a central place, arriving with a peaceful disposition and in wonderment. “We wanted to imagine an escape from everything going on in the world at large,  even if for a moment, just watching this film,” said Bravado and D’Amore. “We wanted to create something that opened the conversation of royalty and Black youth.” 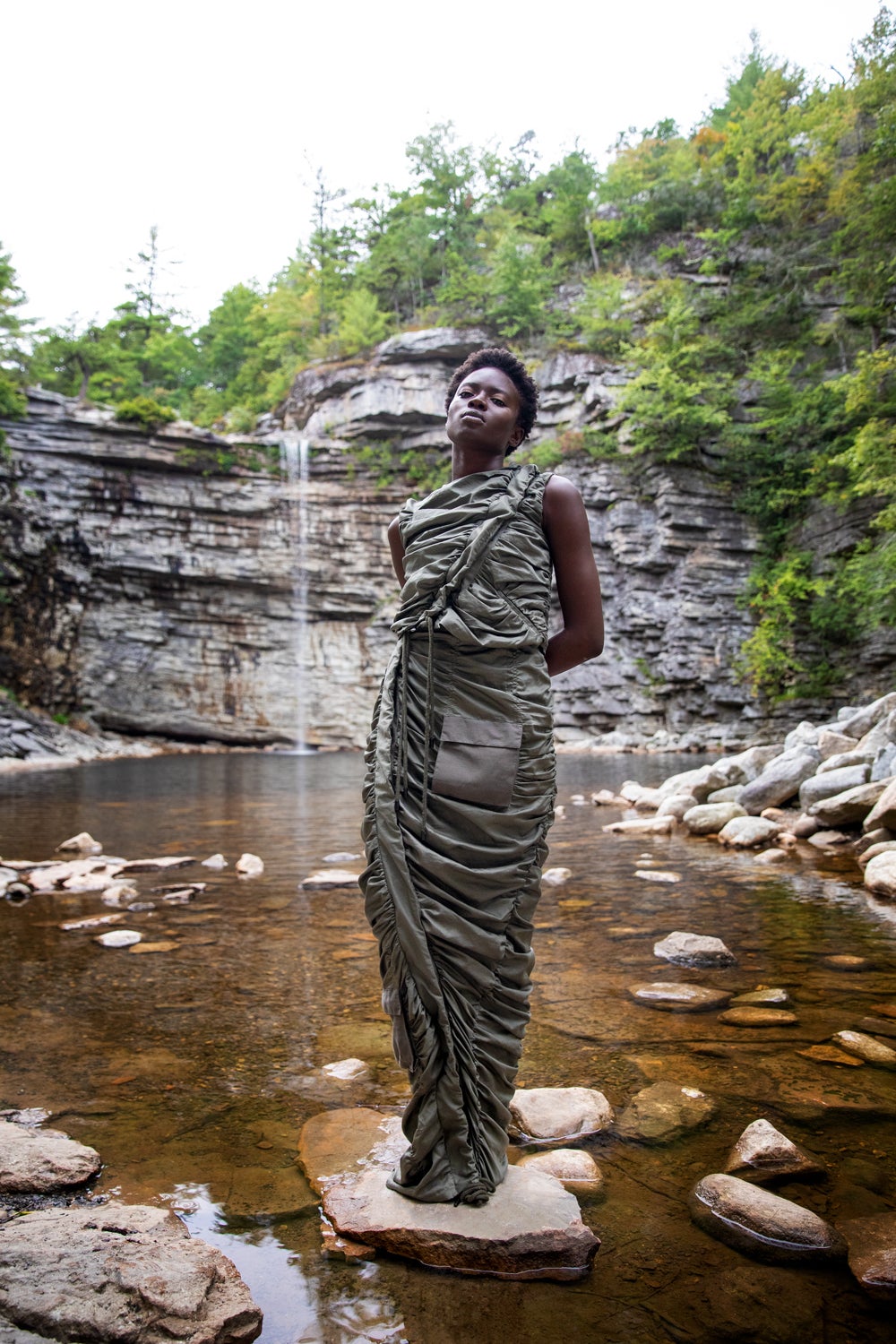 Accompanying the sounds of the earth is a spoken word poem written and orated by rapper Joey Badass. “Who decides war if neither side is wrong. Whose world can this be if none of us are wrong?” he says as the camera pans in on a man wearing a cream layered shirt, a leather paneled vest, a two-toned brown split pant, and a hat stands on the steps. “Who’s to be blamed for the storms if not the face and the reflection of the puddles when they eventually calm. A still small voice,” Joey Badass continues a man stands looking out to the water while wearing a deconstructed cream knit and jeans that repeat “Who Decides War” along the leg.

Another man takes pace on the interior steps wearing a deconstructed green sweater over a white shirt, deconstructed denim with embroidered suns, and a camo and white lace bucket hat. “Life is but a ripple effect I guess every experience like a drop of water if I had a nickel cap for every dark I manifest. I’d still be in my divine order. A still small voice,” Joey Badass continues as a man runs up the steps wearing a side split sweater with embroidered images of the church mosaic, deconstructed denim, and a floral hat.

A group of men stands staggered on the rocks, wearing the foregoing looks and additional looks featuring a blue sweater with a fiery American flag, as Joey Badass continues narrating about the places his mind wonders. Soon after three men in deconstructed patchwork denim and oversized poncho looks appear in the forest. As they depart more men descend following the theme of unconventional stitched and embroidered denim, patchwork, denim hats,, and back split jackets. 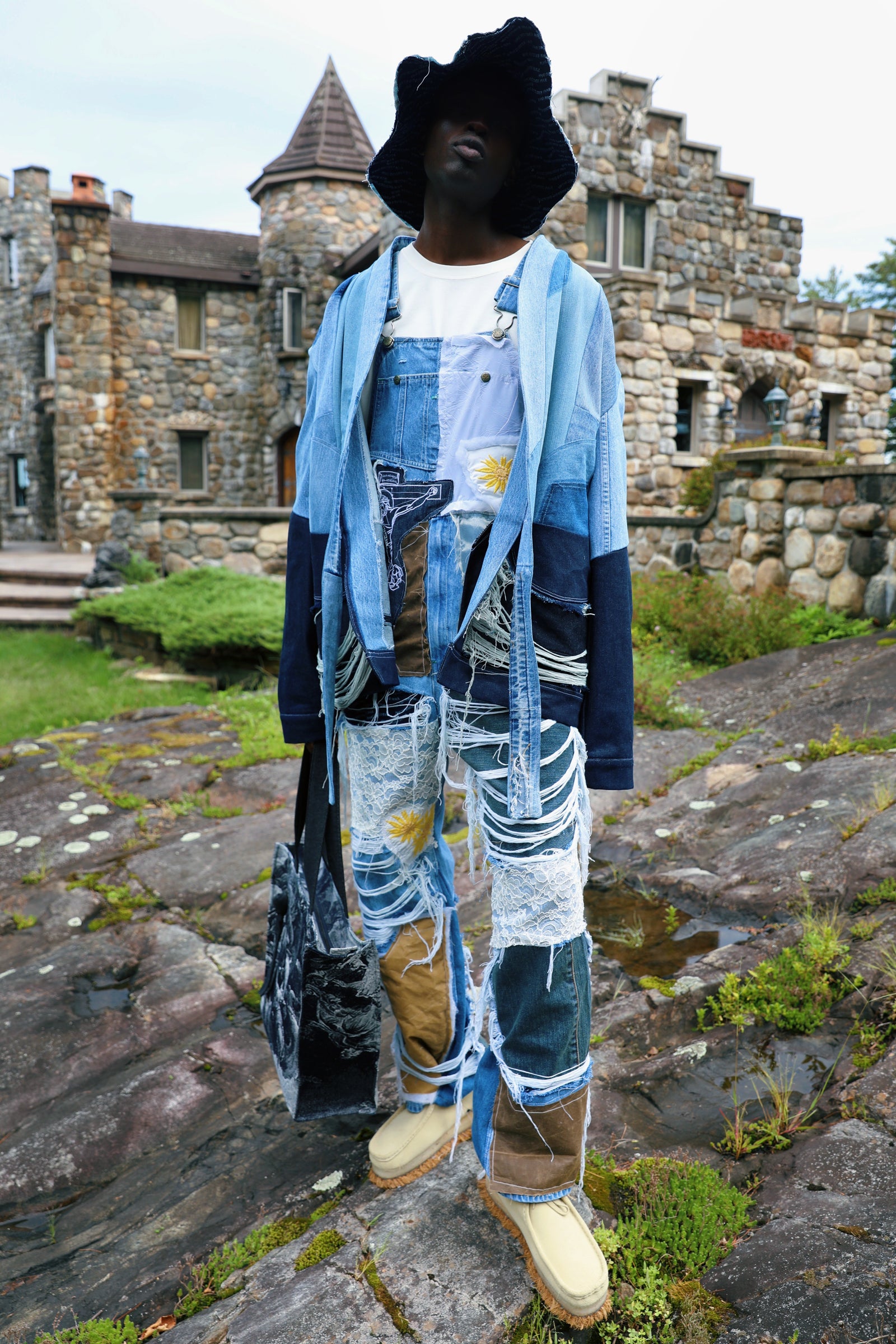 The first woman would be revealed as the camera pans from her standing place in the water to her face. She stands wearing an olive one-shoulder ruched and pocketed floor length dress. Her presence marked the debut of the brands’ women’s looks. More women would ascend in the scenery where all men had previously been seen, wearing ruche and lace shirts that encapsulate the face and hands and lace and embroidered denim.

The film concludes with Joey Badass’ last stanza,”“We all exist in between reality and a dream. What does it really mean to say what you mean? We reap what you sew like it’s woven into our jeans. A still small voice can make the biggest impact with just the right words. Every man is a shepherd like lost sheep dying to be heard. A still small voice.”

The Who Decides War SS2021 collection in its entirety includes denim, canvas, Egyptian cotton, leather and lace craft and features stained glass arch silhouettes to translate their connection to salvation and the today’s climate.