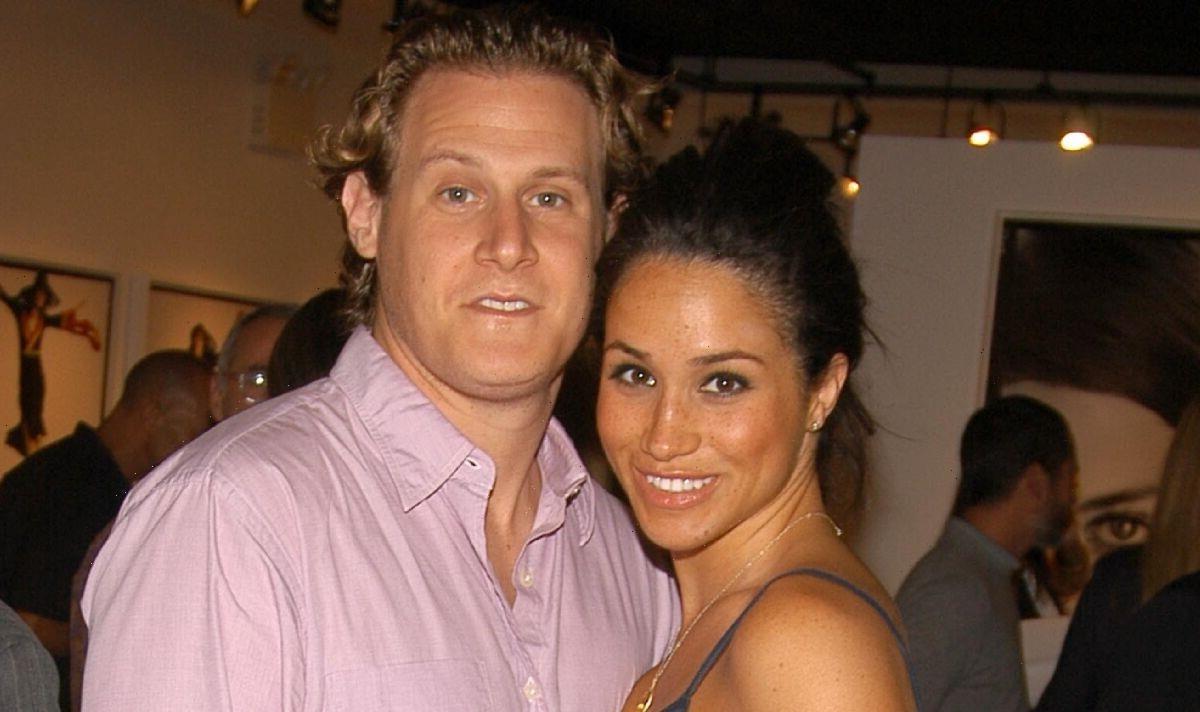 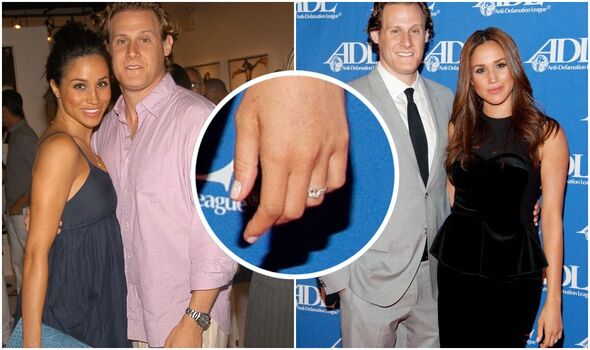 Meghan Markle, 41, wears a diamond engagement ring from her husband Prince Harry, who she married four years ago in 2018. However, back in 2011, the Duchess of Sussex walked down the aisle to another man wearing a completely different ring.

Meghan married her first husband, Trevor Engelson, in Jamaica back in 2011 before divorcing two years later in 2013.

This wedding took place five years before the Duchess met Prince Harry, her now-husband and father of her two children, Archie and Lilibet.

Mr Engelson was a film producer and the two had dated since 2004. However, the couple split in 2013 after Meghan moved to Toronto, Canada to launch her career on the show Suits.

It is reported that distance broke the two apart as Trevor stayed in California, which happens to be the current home of Harry and Meghan.

According to a claim by royal biographer Andrew Morton in his book “Meghan: A Hollywood Princess”, it was soon after the split that Meghan supposedly posted her diamond engagement ring back to Trevor, who “could barely contain his anger” when he received it.

However, while there’s a wealth of information on Meghan’s relationship with Trevor, there’s not much out there about the engagement ring in question.

Taking a close look at photos, diamond experts at UK retailer Steven Stone have shared everything royal fans need to know, including how it compares to her ring from Prince Harry.

Zack Stone claimed to Express.co.uk: “Trevor proposed to Meghan with what looks like a round or cushion cut solitaire diamond on a thin platinum or white gold double band, featuring an incredible set of pave diamonds.

“Meghan reportedly posted her diamond engagement ring back to a disgruntled Trevor soon after the couple’s split.”

The expert expanded on how the Duke of Sussex’s jewellery creation compared with that of Mr Engelson’s ring.

Mr Stone continued: “When Prince Harry proposed to Meghan in 2017, he presented her with a beautiful three-stone engagement ring, featuring diamonds from Princess Diana’s jewellery collection.

“Prince Harry custom designed the ring which includes a centre cushion cut diamond, sourced from Botswana, a place that holds a special place in the couple’s hearts.”

Harry and Meghan elaborated during their Netflix series about how their relationship really blossomed in Botswana during the early days of their courtship.

However, although Meghan described the ring as “beautiful” in her engagement interview, she ended up making some adjustments later down the line.

Mr Stone added: “Over 18 months later Meghan made some alterations to the ring, replacing the yellow gold band with a delicate diamond pave band instead.”

The jewellery expert predicted the price tags for both individual rings, and compared them together to see which one holds the most value.

He claimed: “There is a staggering price difference between the two rings. Whilst Meghan’s sentimental ring from Harry is worth approximately £120,000, her ring from Trevor was worth just £13,000.”

Meghan’s engagement ring from Trevor Engelson features what looks like a round or cushion-cut solitaire diamond, weighing around 1.5 to two carats. It has a thin platinum or white gold double band, featuring an incredible set of pave diamonds.

In contrast, Prince Harry’s design is estimated to have a three to four-carat stone, estimated to be extremely high quality with incredible colour and clarity, and flawless to the naked eye.

The two round diamonds supporting the centre stone are from Princess Diana’s jewellery collection and are around 0.5 to 0.75 carats each.