SINCE Meghan Markle touched down in Cape Town earlier this week, she's been spotted recycling two outfits, previously worn while she was pregnant with four-month-old baby Archie.

Now, royal fans are praising the Duchess for wearing the same looks twice, with one claiming it's "an incredible message to send". 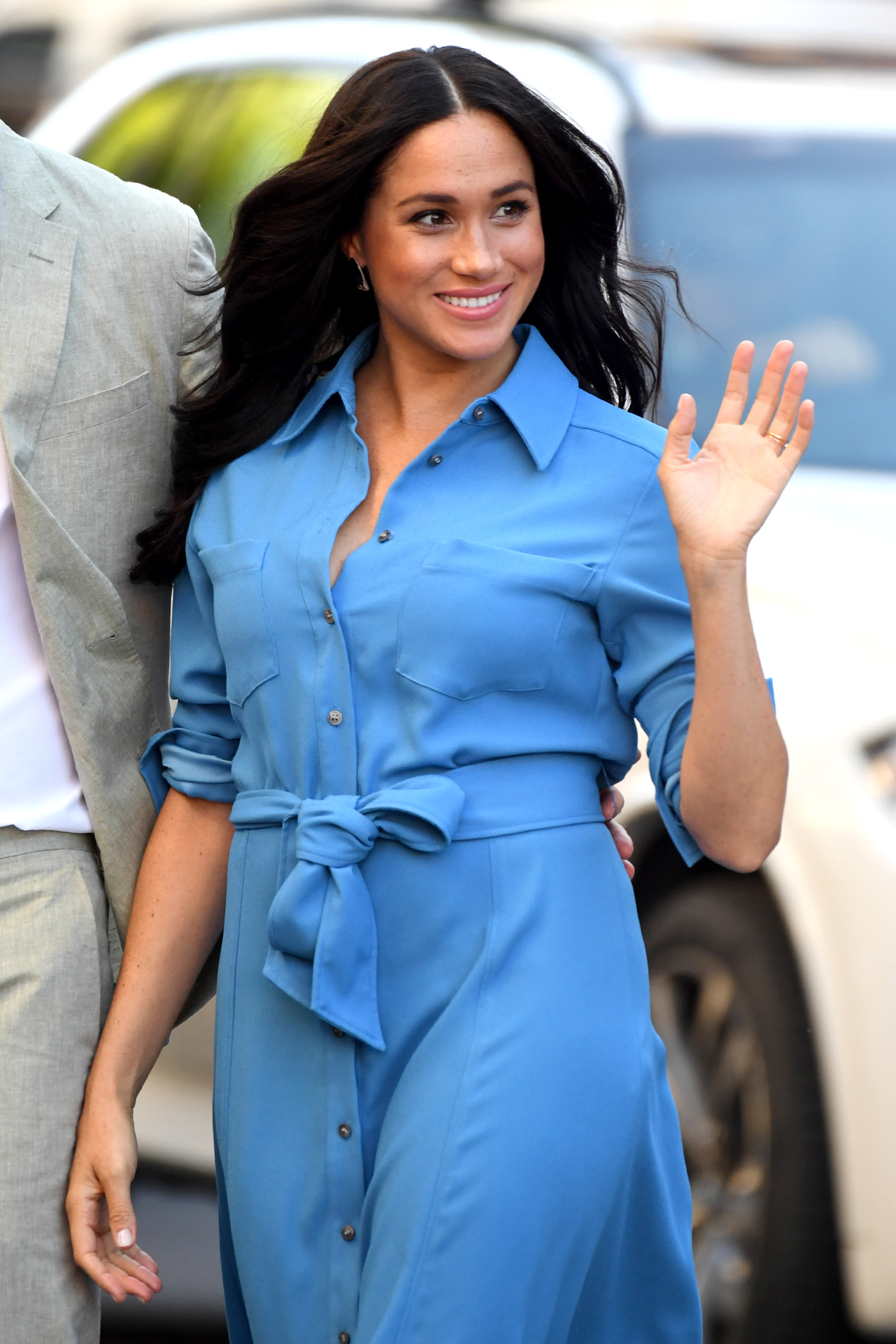 Earlier this week, for Meghan's second royal engagement at the District Six Museum, she wore a beautiful £465 sky blue shirt-dress by Veronica Beard.

She had previously worn the blue dress during a visit to Tonga when she was three months pregnant last October.

While at the time, Meghan paired the dress with light blue heels and minimal jewellery, this week, she wore her hair down in her signature wave and teamed it with just a simple pair of gold earrings.

And while fans were convinced Meghan had re-worn the dress because it was one of her favourites (the duchess chose a picture of her wearing it for both her birthday thank you cards and Harry's birthday Instagram tribute) she decided to recycle yet another dress yesterday. 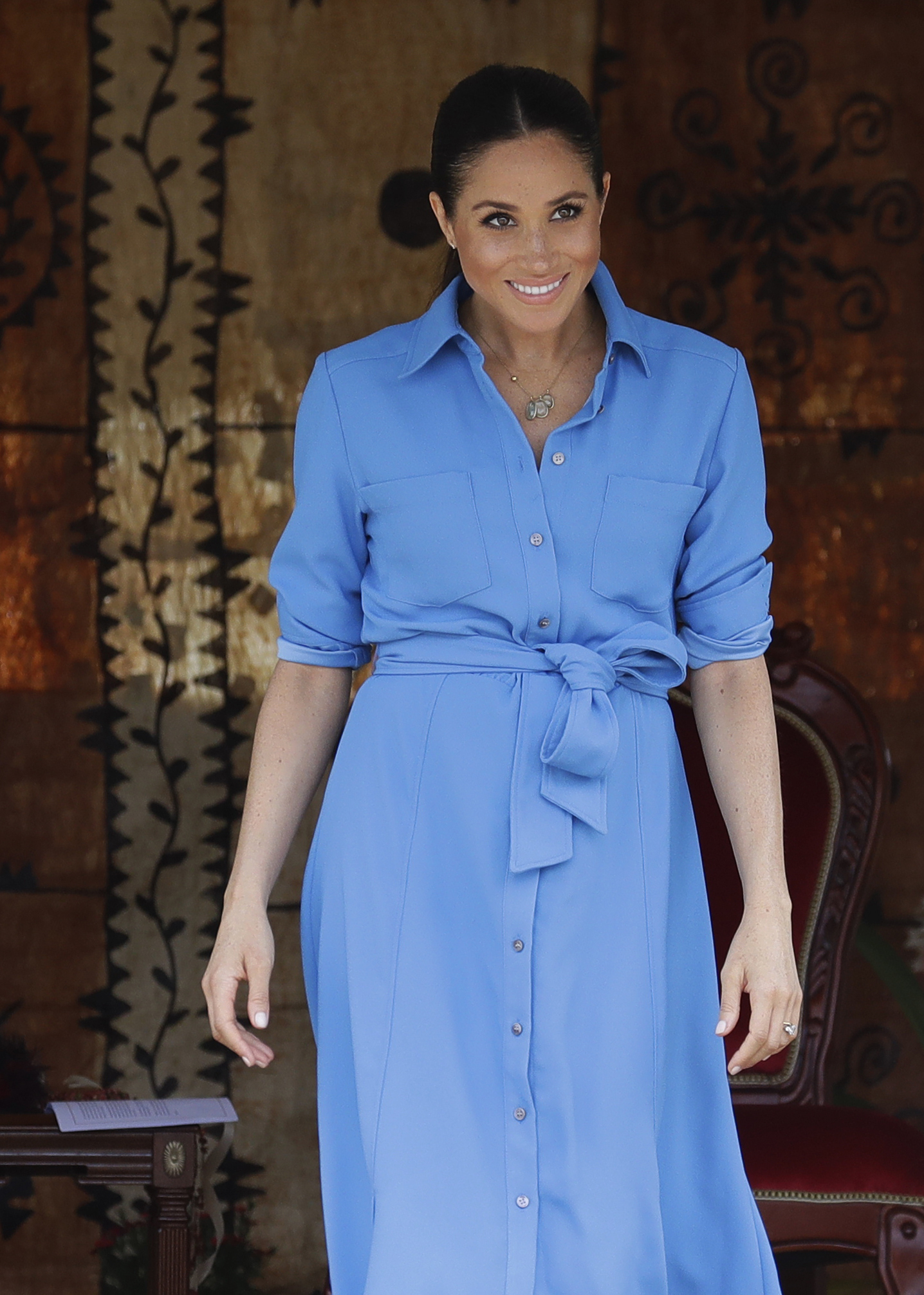 While attending a reception at the British High Commissioner's Residence yesterday evening, Meghan stepped out in a striped Martin Grant maxi dress she previously wore on Bondi Beach, during her and Harry's royal tour of Australia last year.

The Duchess of Sussex teamed the £1,080 dress with statement earrings, having previously worn the sundress shortly after she announced her pregnancy in October 2018.

And royal fans can't stop praising Meghan for repeating outfits she wore during pregnancy and "owning her post-baby body". 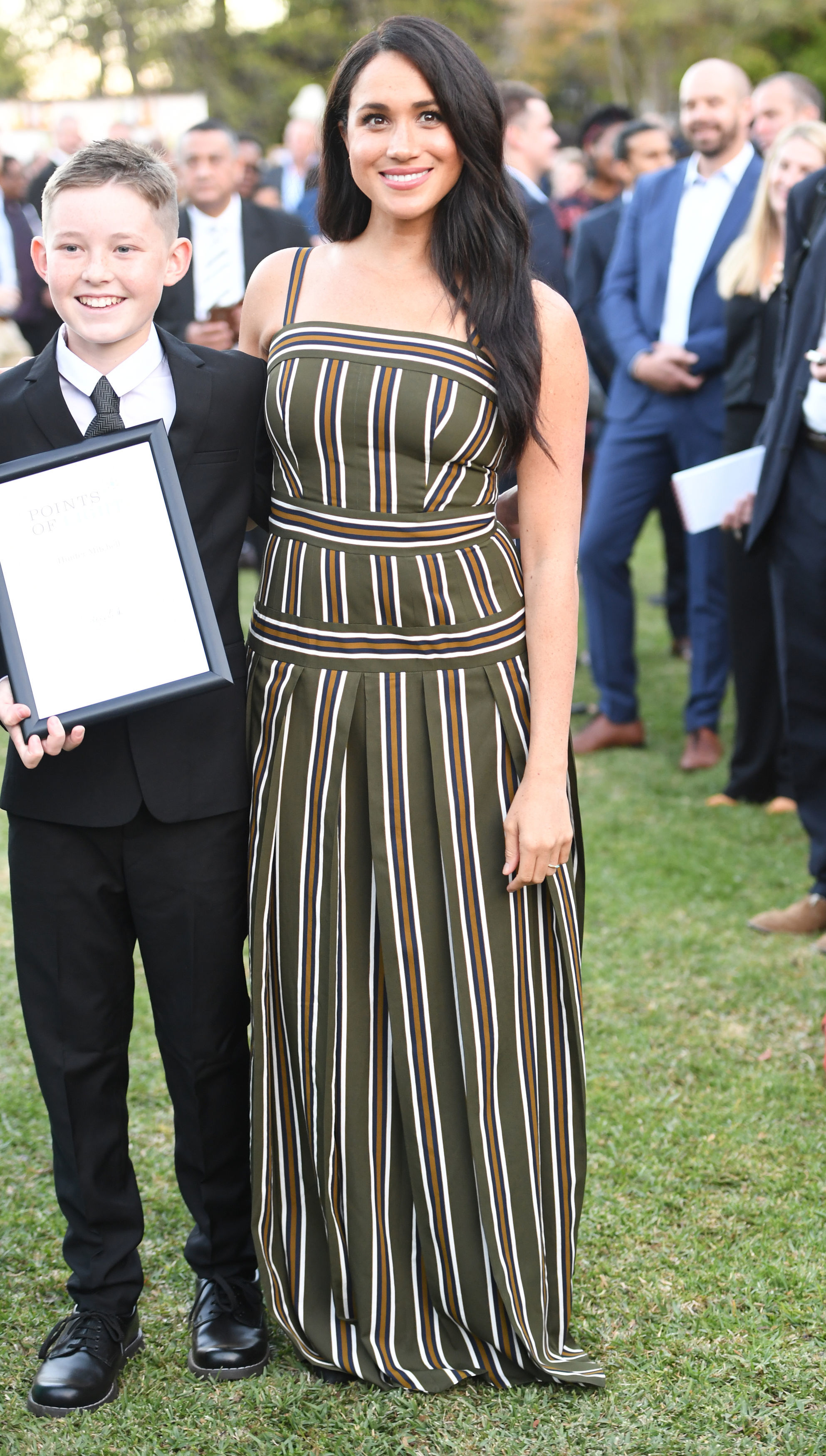 One royal fan and reporter, Elizabeth Holmes, took to Instagram to post a very detailed analysis of Meghan's outfit repeat.

"Another (extremely thought out) repeat," she wrote.

"I'm amazed at the restyling here, going from a casual beach dress to an evening event.

"For a reception at the British High Commissioner's Residence, she added Manolos and earrings from SA jeweller, Nina Bosch.

"Once again, massive props for repeating a dress from pregnancy while not pregnant, it's an incredible message to send.

"And now of the five looks she has worn, two have been repeats – this is after a year of fashion with repeats very rarely." 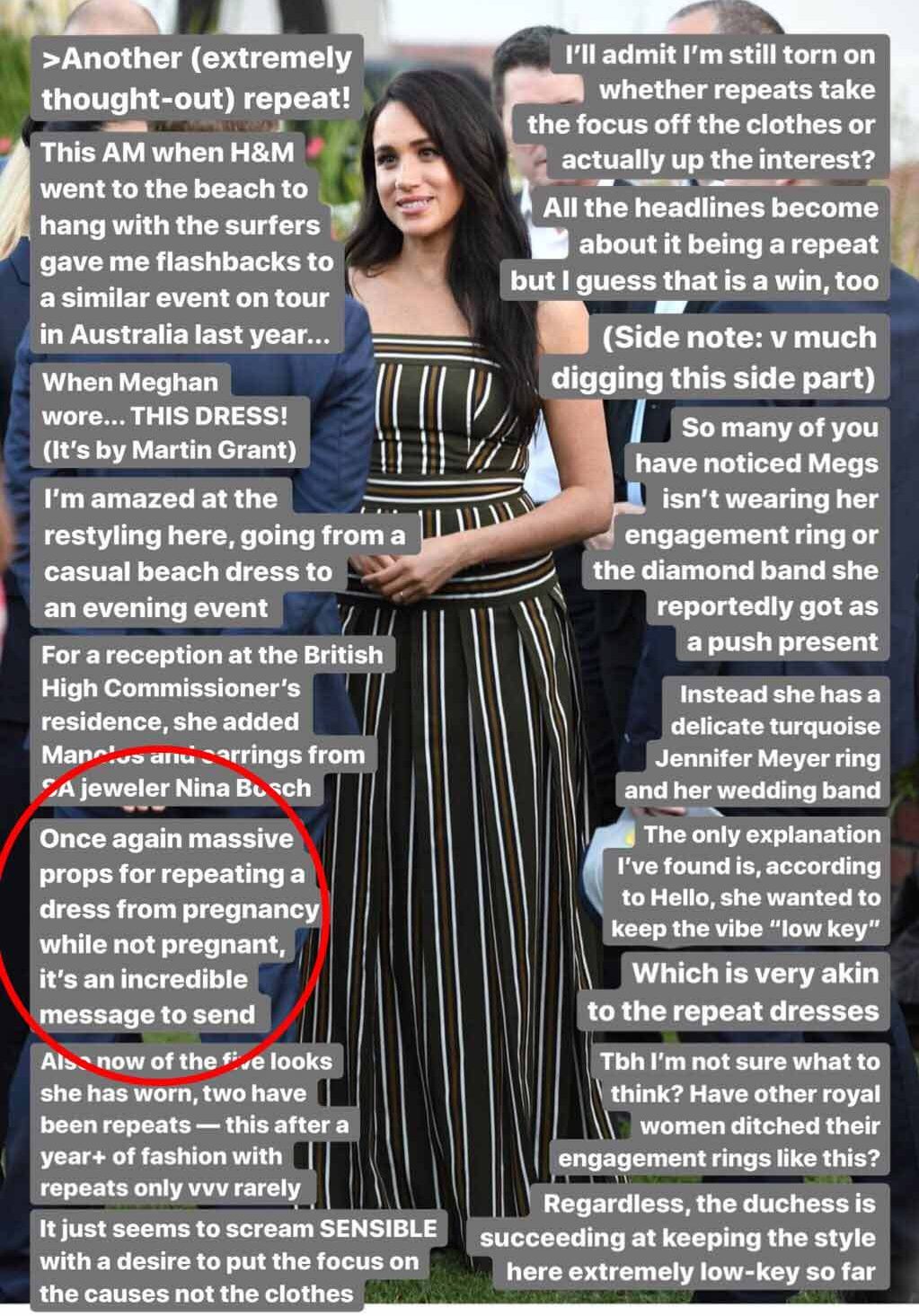 And other royal fans seem to be in agreement, with one praising Meghan for not feeling the pressure to be "super skinny" straight after giving birth.

"Such a stunner, hope she doesn’t feel pressured to be super skinny," they wrote.

"She looks good the way she is now."

While another said: "I love the fact that she’s real and not a size two immediately."

One royal fan praised Meghan for "owning her post-baby body" and "continuing to champion her causes".

"Meghan, is embracing her body whatever stage it is at," they wrote.

"That is more realistic because getting pre-preggo size after giving birth? It's a process and sometimes, your body simply changes.

"So bravo to Meghan for owning her body and continuing to champion her causes."

#news Their Royal Highnesses The Duke & Duchess of Sussex attending a reception at the British High Commissioner‘s Residence and meet with inspiring opinions formers and young future leaders, underlining the rich and diverse nature of the U.K.‘s modern partnership with South Africa. . ——————————————————— Probably you recognize the dress from Martin Grant; she wore last Royal Tour in Australia.

#news Their Royal Highnesses The Duke & Duchess of Sussex attending a reception at the British High Commissioner‘s Residence and meet with inspiring opinions formers and young future leaders, underlining the rich and diverse nature of the U.K.‘s modern partnership with South Africa. . ——————————————————— Probably you recognize the dress from Martin Grant; she wore last Royal Tour in Australia.

Elizabeth also praised Meghan for repeating the dress and "putting focus on the causes not the clothes".

She also went on to explain that Meghan's decision to replace her engagement ring with a minimal Jennifer Meyer style could be reinforcing the "low key vibe".

"Regardless, the Duchess is succeeding at keeping the style here extremely low-key," she said. 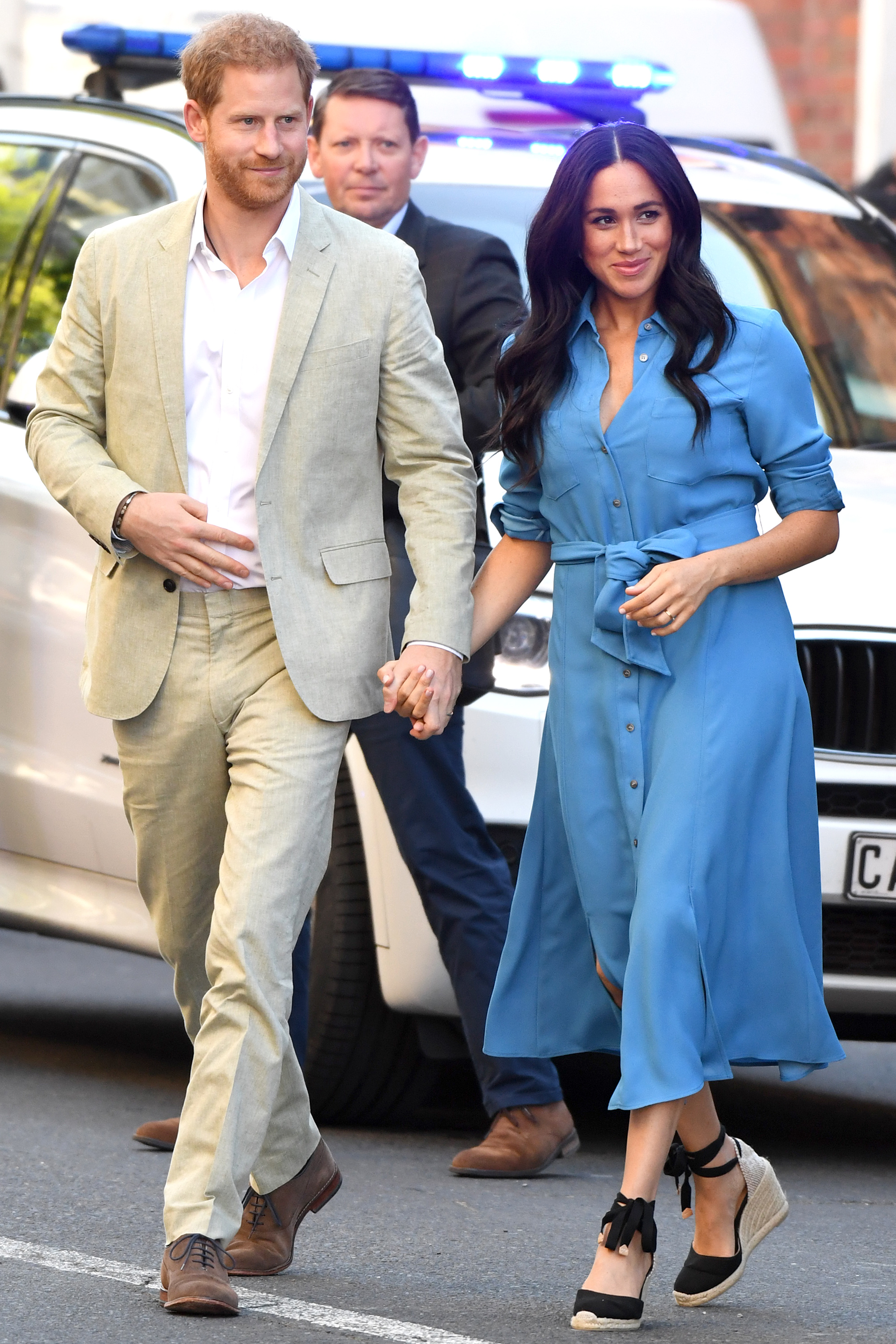 Other said it was "refreshing" to see the Duchess wearing the same pieces.

Writing on an Instagram post by @harry_meghan_updates: "A very sensible and much thought out opportunity to use pieces she first began wearing in her early stages of pregnancy.

"Both are tropical climates, and are perfect for each year."

While another said it was "refreshing to see that [Meghan] re-wears her clothes for events."

Other agreed, with one saying it was "frugal" of Meghan to be recycling looks.

Some fans said Meghan was being environmentally-conscious, with one commenting: "I think she is being conscious of wearing the same clothing items for a reason such as slow fashion.

"Either it is recycled by continuously wearing or donating, but it is also eco-friendly!

"Maybe that is why she is repeating outfits, possibly to make a point."

In other royal news, we told you Meghan Markle reveals son Archie Harrison loves to sleep on his dad Prince Harry’s chest.

We also revealed Prince Harry is ‘still in the honeymoon phase’ with Meghan Markle as he smooths her ponytail on Africa tour, body language expert reveals.

And we showed you the Queen in fits of giggles as she dances with Diana, Charles and Andrew in unearthed footage at Balmoral in the 90s.