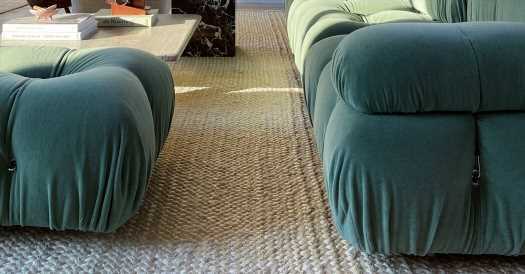 This article is part of our latest Design special report, which is about expanding the possibilities of your home.

It’s the furniture equivalent of sweatpants. After a year in which many people hung up their office attire and evening wear in favor of all-day pajamas, a design trend that has been bubbling up for years became fully inflated: the embrace of bulbous, low-slung, super-squishy furniture that offers all-out comfort.

Sofas and chairs that evoke plush 1970s lounges, like Cassina’s Soriana collection and B&B Italia’s Camaleonda modular sofa, are suddenly hot commodities. At the same time, contemporary designers are experimenting with oversize proportions and sink-in plushiness to a level that would have seemed profane to devoted modernists just a few years ago.

Soriana lounge chairs and sofas, which were designed by Afra and Tobia Scarpa for Cassina in 1969, feature voluminous tufted cushions squashed into place by chrome bracing. The pieces can now be found in the homes of design luminaries such as Nate Berkus, Kelly Wearstler and Shanan Campanaro of Eskayel.

“The Soriana sofa, on the vintage market right now, is almost impossible to get,” said Mr. Berkus, who bought the one now installed in his New York family room before interest took off. “It’s gone, in the last three years, from something that you could find for $5,500 to $12,000 or $15,000. And often they need to be re-covered.”

Mr. Berkus, who was born in 1971, expressed some regret about being as old as the vintage couches so many people now covet, but said his younger clients routinely sent him images of Soriana sofas as inspiration for their homes.

“They just seem like a lot of fun,” he said. “Whether the interior is totally monochromatic or a mix of bright English or French patterns, they still look cool.”

Well aware of the swelling interest, Cassina reintroduced the Soriana collection last month, after ceasing production of the pieces in 1982, when they last fell out of favor.

“For us, it was kind of a no-brainer,” said Luca Fuso, the Italy-based company’s chief executive. “If you look at the trends, if you look at Instagram, Soriana is everywhere.”

Of course, Cassina isn’t the only European manufacturer panning through archives in search of furniture gold. The Danish brand Gubi reintroduced the poufy cloud-inspired Pacha lounge chair, originally designed by Pierre Paulin in 1975, in 2018, and followed it up with a Pacha sofa last year.

In 2020, B&B Italia also revived a hippie-age relic, which had last seen production in 1979: Camaleonda, a modular sofa designed by Mario Bellini in 1970 with cables and rings that tie down puffy padding. The sofa has attracted many high-profile owners, including Chrissy Teigen and Mike D of the Beastie Boys. Athena Calderone, the designer, author and founder of the lifestyle site Eyeswoon, placed a vintage Camaleonda at the center of the living room in her much-studied Brooklyn townhouse.

“When I embarked on this journey to completely renovate and redesign the Greek Revival townhouse that I live in now, that was the very first piece that I bought for the home,” said Ms. Calderone, who had it shipped from a dealer in the Netherlands. “It just feels really sexy, bulbous and sinuous.”

She said she loved the sofa so much that she recently bought a second, reissued Camaleonda covered in sage-green mohair for her weekend house in Amagansett, N.Y. “I find it to be that comfy,” she said.

Ligne Roset’s Togo modular sofa and chairs, which were designed by Michel Ducaroy in 1973 and resemble crumpled oversize floor pillows, are another designer favorite (sales were up more than 200 percent at the end of March, compared to the same period last year, according to the manufacturer).

In their own home, Mr. Drew and Ms. Bell have an Anfibio convertible couch, designed by Alessandro Becchi in 1971, which is built around a leather-covered polyurethane mattress that folds up like a taco to form a seat.

“Me and James, when we’re hanging out, we’re always on our Anfibio, which is so low to the ground,” Ms. Bell said. “There’s just something vibey and comforting about that versus sitting in a traditional upright sofa.”

But it’s not only pieces from the 1970s that are attracting attention. Many contemporary designers are exploring similarly plump forms and cushy materials as well, in products with names that exude downy comfort. There is the Puffer chair by Moving Mountains, a different beanbag-like Puffer chair by Philippe Malouin for SCP and the Tube chair by Objects of Common Interest with Falke Svatun.

Faye Toogood, a London-based designer who got her start creating spartan furniture like the Spade chair — a hard seat with a backrest resembling a shovel handle — has recently been turning out radically softer pieces. Her Puffy lounge chair for Hem, for instance, resembles a well-stuffed sleeping bag slung over a metal frame.

“To be able to cocoon you and support you, but in a soft and squidgy way, was my ambition,” Ms. Toogood said. “It’s the essence of feeling like you’re under a duvet or under lots of cushions.”

Petrus Palmer, Hem’s founder and chief executive, said the chair had been a hit. “It’s rare to launch a big-ticket furniture item and get immediate commercial success — it usually builds over time,” he noted. “But with Puffy we were off to the races from Day 1.” Since beginning to ship the chair to the United States this past January, he said, the company has filled hundreds of orders.

Ms. Toogood also introduced a bed for Birkenstock at the end of March with sides and a headboard so voluminous it could be mistaken for a crash mat.

“It’s part of my softgoods obsession,” Ms. Toogood said. “We need that comfort and softness at the moment.”

But she also predicts that the move to more casual, comfier modes of seating will outlive the pandemic. “In my own work, I’m going to be embracing more color, more pattern and comfort,” she said. “I feel that the Puffy chair and the bed have it to a certain extent — there’s a joyousness about the shapes.”

As the pandemic slows and it’s possible to safely entertain guests again, she added, “we will all become a little more relaxed.”