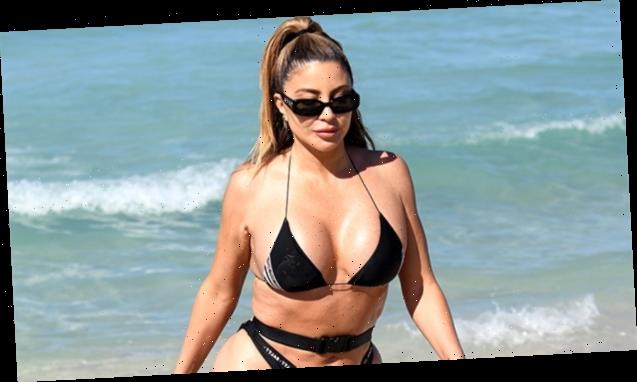 Larsa Pippen continues to heat up the ‘gram with sultry bikini selfies — and, we’re not complaining! On March 21, the former Real Housewives of Miami star, 46, showed off her amazing curves in a sexy mirror selfie. Larsa, who snapped the photo in her lavish walk-in closet, donned a leather bikini top and matching string bottoms. She posed with her side profile facing the mirror, which allowed for a good glimpse at her flat tummy. And, she looks incredible!

Larsa quoted Drake‘s “What’s Next” song in her Instagram caption, writing “We’ll see what’s ‘bout to happen next”. That same day, she took to Instagram Stories to share a series of videos at Donald Trump‘s Mar-a-Lago resort in Palm Beach, Florida. Larsa and Michelle Pooch (a DJ and former Love & Hip Hop Miami star) attended a designer car show at the resort — despite news of a COVID-19 outbreak at the luxury location.

Larsa’s been enjoying spring break in Miami, where she’s been living, although she often returns to LA for work. More recently, the mother of four — who was believed to be dating NBA star Malik Beasley — stirred up romance rumors with Myles Kronman, the founder of Model House Los Angeles. The pair was photographed sitting poolside while sipping coconut cocktails at the W Hotel in South Beach on Saturday, March 13, where they looked pretty cozy together.

Meanwhile, Larsa and Malik haven’t clarified the status of their relationship. The television personality and Beasley, who currently plays for the Minnesota Timberwolves, were first romantically linked back in November when they were photographed holding hands at a shopping mall in Miami. The outing came while the athlete was still married to ex-wife Montana Yao — who later filed for divorce on December 8, after she saw the aforementioned viral photos. Beasley and Yao share a one-year-old son named Makai.

Let us remind you that Larsa is still legally married to estranged husband, Chicago Bulls legend Scottie Pippen. The pair separated in 2015, and Scottie filed for divorce after accusing Larsa of having an affair. They later reconciled, but Larsa ultimately filed for divorce again in 2018. Though, the divorce has yet to be finalized. In the meantime, the exes seem to be coparenting quite amicably. They share four kids together: daughter Sophia, 13, and sons Scotty Jr., 20, Preston, 19, and Justin, 16.