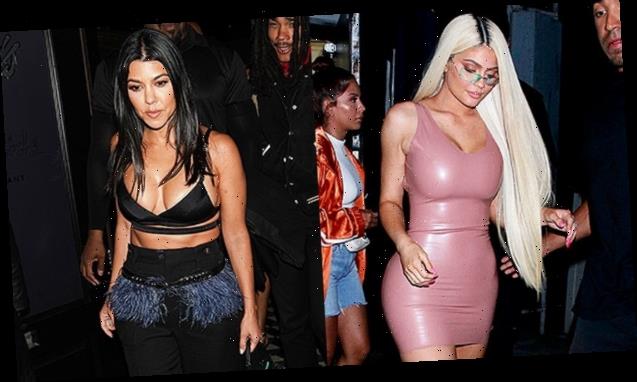 It looks like Kylie Jenner and Kourtney Kardashian have the same taste in bikinis. Kylie rocked a blue version of the hot red set that her older sister recently wore, and also turned her triangle top sideways.

Kylie Jenner, 23, is looking up to her big sister Kourtney Kardashian, 41, when it comes to bikini style. The makeup entrepreneur threw on a bold blue string bikini to spend the day at mom Kris Jenner‘s $12 million pad in La Quinta (a stone’s throw from Palm Springs) on Feb. 5, which looked nearly identical to the one Kourtney wore at the end of January.

Like Kourtney, Kylie rocked itty-bitty string bikini bottoms and a triangle top worn sideways (a trendy trick to get two looks out of one bikini top). The only difference was that Kylie’s set was a deep blue! The Kylie Cosmetics founder accessorized with a dainty gold body chain and gold nameplate necklace, which twinkled against her glistening skin, thanks to her company’s SPF body oil. The business woman shared close-up looks of her blue bikini look, which you can see above.

Kourtney, too, shared a closeup-look of the same bikini style in her swimwear photo carousel above. “A little fun in the sun,” she captioned one post on Jan. 29, and then got a bit more cheeky as she captioned another post (below), “parched (bc my content is thirsty this week LOL).”

Kourtney has especially been updating her Instagram page with bikini content, given that she’s recently taken trips to their mom’s home-away-from-home in the California dessert and Turks and Caicos. First up was a pit stop at Kris’s La Quinta home, and a source EXCLUSIVELY told HollywoodLife that Kourtney brought Blink 182‘s drummer/longtime friend Travis Barker along.

“They’ve been together now for about a month or two,” the insider added, telling us, “It’s still pretty new. There is a lot of chemistry between those two. They’ve hooked up a lot over the years, but right now they’re dating.”

However, it was just a girls trip when Kourtney later jetted away to Turks and Caicos to celebrate the third birthday of her niece, Kylie’s daughter Stormi Webster. Kourtney wore even more bikinis — and even debuted a hair extension makeover — to pose for photos with her gal pals/sisters like Victoria Villarroel and Kim Kardashian.