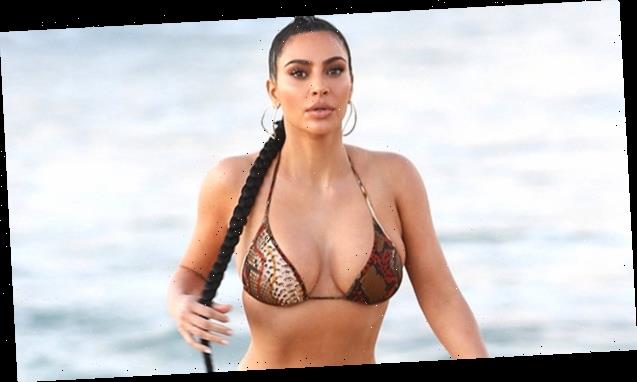 Kim Kardashian visited a lagoon with her friends and daughter, North West, where she jumped into the water while rocking a black bikini!

Kim Kardashian may be back from her tropical vacation, but she’s still enjoying the water. The SKIMS boss had a swimming party in a lagoon, which she posted photos and videos of on April 2. These included pictures of the 40-year-old SKIMS boss showing off her amazing physique while emerging from the secluded water spot in a classic black bikini.

“The Blue Lagoon,” Kim captioned the post, which also showed photos of her wading in the water with her seven-year-old daughter North West. They were joined by Kim’s former assistant Stephanie Shepherd, public relations executive Simon Huck, the KKW Brands’ Chief Marketing Officer Tracy Romulus, and Snif co-founder Phil Riportella. Everyone took turns launching themselves into the lagoon!

Kim recently returned from a spring break getaway with her children. On April 1, the Keeping Up with the Kardashians star shared a photo of what “mom life on vacay” looks like: having a cuddle party with Saint, 5, Chicago, 3, and Psalm, 1, while lounging on a pool cot near the sea.

Kim enjoyed the getaway amid her divorce with Kanye West, whom she also shares her four children with. After nearly seven years of marriage, the E! star filed for divorce on Feb. 19, amid reports of marital struggles. “Kim and Kanye both had met with lawyers. Kim felt she tried everything to make the marriage work and Kanye was refusing to get the help she requested which was the final straw,” a source EXCLUSIVELY told HollywoodLife after Kim filed the petition, referring to Kanye’s Bipolar disorder diagnosis.

“She and the Kris [Jenner] too even tried to get him to go to counseling and offered support as best she could and he kept refusing,” the source added. However, “Kanye hasn’t filed a response to Kim’s divorce filing because he still doesn’t accept that Kim will see the divorce through to completion,” another source EXCLUSIVELY told HollywoodLife over a month later in March, who added that Kim’s “whole family is stunned.”

Kim is currently staying with the kids in her and Kanye’s shared home in Hidden Hills, California. Meanwhile, Kanye has been reportedly staying at his estate in Wyoming.