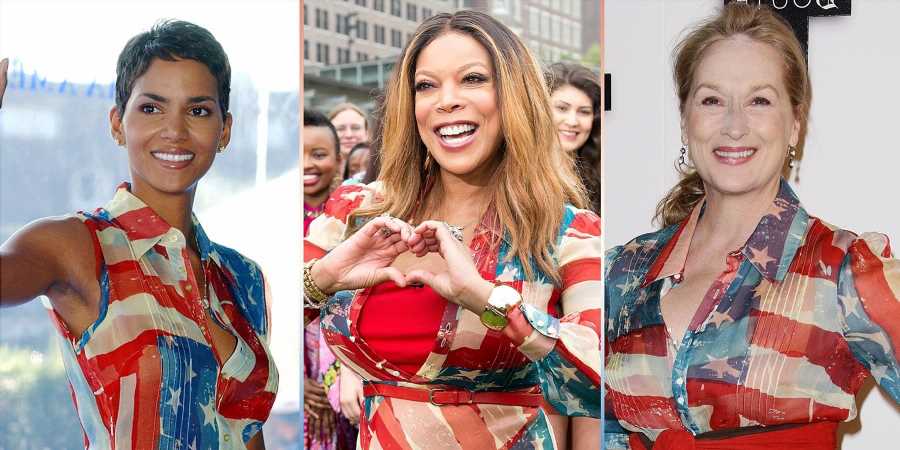 The Fourth of July is a perfect holiday. The peak summer date means hot days and cold drinks followed by warm summer evenings spent swaddled in crewneck sweatshirts over bathing suits, buzzing from both sun and booze as fireworks bloom with the pulsing consistency of a Windows XP screensaver.

It's almost enough to make you forget the point of the holiday — a celebration of America, its founding and ideals — and maybe that's by design for some of us.

I've never been one for dressing to a theme (much to the chagrin of my sorority sisters), but in the past few years I've felt myself bristling more than usual at the prospect of parading around New York City in red, white, and blue. At times when the country has disrespected women's bodily autonomy, mishandled a deadly pandemic, or descended into white-supremacist chaos, the flag, specifically, has felt … contentious.

It wasn't always this way.

Twenty years ago, the American flag was everywhere you looked — especially in the epicenter of the September 11th tragedy, New York City. Booth Moore, executive west coast editor at WWD, who was covering New York Fashion Week for the L.A. Times on 9/11, remembers the speed with which the city produced pro-America paraphernalia. "The flags and the patriotism just sprung up immediately, and that was because we were, as a nation, under attack," she says of the T-shirts, hats, totes and more that were stamped with the American flag or "FDNY."

"All we wanted to do was buy them," she continues, and "show pride for the city and for the first responders who were doing all this amazing work down at [Ground Zero]."

There was a sense of helplessness felt by many Americans in the aftermath of the terrorist attacks, she adds — a pervasive feeling of grief and dread and confusion. But out of the disaster bloomed unity, a desire to connect with others, to lean on one another. For many Americans, showing we would stand together in the face of tragedy looked a lot like wearing the American flag. "Everyone felt so horrible and so scared," says Moore, noting that she sees a parallel of that same shopping bug in today's pandemic economy. "And so of course that little flicker of 'Oh, I'm going to shop for this thing' was kind of a little tiny respite."

Though I was 8 in 2001 and barely remember a time when malls weren't laden with American Flag bandanas, hats, T-shirts and all kinds of patriotic ephemera year-round, the flag was rarely seen in the realm of high fashion, save for designers who made the American iconography a part of their brand, like Tommy Hilfiger and Ralph Lauren, says Moore. But it was around.

Petra Slinkard, curator of costumes for the Chicago History Museum, told Racked in 2017 that "we start to see the flag used as a component in fashionable dress more prevalently in the 1950s and 1960s, which was brought on in part by the United States' involvement in the Korean and Vietnam Wars. The flag was used in both support and in protest of those efforts." Despite the rarely enforced Flag Code, which prohibits the commercial use of the flag, wearing stars and stripes only became more popular over the years — and in 2001, it exploded.

During the 2002 awards season, which took place 3,000 miles away from Ground Zero, celebrities made the red carpets as patriotic as ever. Reba McEntire wore a sequined stars-and-stripes gown to the People's Choice Awards, posing in a salute for the paparazzi; TV personality Cynthia Garett wore a flag dress with an asymmetrical hem to Golden Globe Awards; singer Dottie Peoples (who performed at the late congressman John Lewis's memorial service in 2020), attended the 2002 Grammys in a form-fitting deep-V gown adorned with sparkling stars and glittering stripes. But one dress in particular ruled them all: A chiffon wrap dress in an American flag print by Parisian designer Catherine Malandrino. The piece first made headlines when Halle Berry wore a sleeveless version of it to the Swordfish photocall on Sept. 1, 2001, just ten days before the towers fell. After 9/11, it became a go-to among a select group of Hollywood A-listers: Julia Roberts, Madonna, and Sharon Stone wore the flag print as a show of patriotism in the wake of the national disaster. Seven years later, in 2008, the dress was re-released in anticipation of a new American milestone: The country's first Black president. In the ensuing years, evermore celebrities — Katy Perry, Kelly Ripa, Heidi Klum, Wendy Williams — wore the dress, culminating in Meryl Streep's choice to don it for her speech at the 2016 Democratic National Convention.

Malandrino, who could not be reached for this article, told Allure in 2016 that she had chills while watching Meryl's speech and "was moved to see my dress associated with that historical moment." She added, "This dress is my American dream."

Just months after Streep spoke at the DNC in anticipation of the country's first woman president, another American dream was dashed: Hillary Clinton lost the election to a reality TV star and failed businessman named Donald Trump. For 15 years after 9/11, the American flag was a hopeful if innocuous symbol, as uncontroversial as apple pie. Until it wasn't.

"I think it was a pretty hard stop," says Moore of how quickly the flag fell out of fashion after Trump took office. But runways, she's quick to clarify, are not indicative of fashion trends nationwide. "I'm also speaking from a certain vantage point. I'm sure that there are — in fact, I know there are — lots of people in this country who love to wear American flags."

But the fashion community — which, Moore explains has always had a powerful connection to the anniversary of 9/11 given the overlap with Fashion Week — has ditched the overtly patriotic prints that were so in favor in the years immediately following the attacks.

Moore recalls the first post-9/11 fashion week in 2002, noting that some designers laid tiny American flags on the seats for show attendees. There was a sense of pride for American fashion that reverberated in the air. Vogue's first post-9/11 cover featured a starry-eyed Britney Spears posing with a wide smile against the backdrop of an American flag. The cover line read: "American Fashion Waves the Flag."

Compare this with the reaction to the election of Donald Trump in 2016. New York Fashion Week in the early days of his presidency was filled with in-your-face protests, slogan T-shirts, and unsubtle metaphors. At many shows, designers placed pink pins on the seats of each attendee which read, "Fashion Stands with Planned Parenthood." There was nary an American flag in sight.

And thus began a vicious cycle: Those on the left stepped away from the flag, not wanting to appear celebratory of the new president's new policies; and those on the right picked up the flag claiming mere criticism of the country or any politics within it is "anti-American." The insinuation that activists — and particularly those who are leftists of color — "hate" their country is a smear tactic as old as time, and it also defies logic. Why work so hard for something you don't care about? Especially when the concept of working together for the betterment of the nation is pretty much THE basis for American democracy, but I digress. The point is, many people's relationship to the American flag became warped during the four years of the Trump presidency. The flag, rather than signaling safety and inclusion and the good nature of a friendly neighbor, began to bear the weight of the "America First" doctrine that, for so long only put white and wealthy Americans "first."

So fashion switched tactics. Like the pink pins and pink pussy hats that popped up in 2016, fashion welcomed new symbols, new colors, and yes, more flags. Where the American flag once spelled pride for New York City and the USA in the face of adversity, it's now the actual pride flag (and its many iterations) that signal inclusivity, respect, and yes even unity.

"I think about the cape that Lena Waithe wore to the Met Gala in 2018 that was designed by Wes Gordon for Carolina Herrera," says Moore, referring to the rainbow that fanned out behind the writer/director/actor on the steps of the Met. The fashion industry has certainly capitalized on the rising popularity of LGBTQ+ motifs, with designer collections from Coach, Calvin Klein, DKNY, and more mainstream brands like Under Armour, Crocs, and Dickies. Hell, even the Teletubbies had a Pride collection this year.

"What fashion does frequently is take iconography that's important to people, or grabs it in a certain moment in time, and uses it as a means to communicate what is happening currently," Slinkard said in her Racked interview.

Though we are, as a country, more divided than ever before, we're also facing some of the most unprecedented disasters our country has ever seen — simultaneously. And it stands to reason, as this momentous anniversary arrives on September 11, we will be looking, again, for an item to buy or a symbol to wear that shows we will be okay, and we will pull through this together. "Will we ever be unified as a country, as a faction, under one flag again?" I ask Moore. She replies, "God, I hope so."