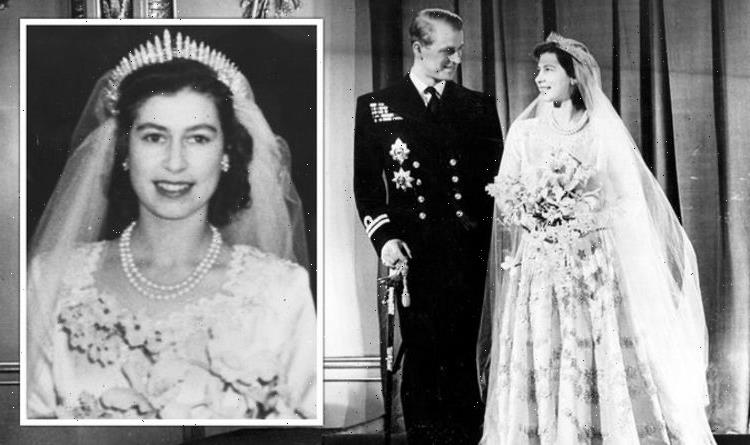 Long before the pair were known as the Queen and Prince Philip, then-Princess Elizabeth married the Duke of Edinburgh in 1947. The future Queen opted for the strikingly beautiful Queen Mary’s Fringe Tiara for her wedding day, which has since been worn by other royal women for their wedding days too.

Princess Elizabeth stunned on her wedding day in a gown made by esteemed designer, Sir Norman Hartnell.

And like all royal brides, Elizabeth was allowed to wear a tiara for her big day from the royal jewellery collection.

Elizabeth opted for the Queen Mary’s Fringe Tiara, a tiara she would wear several times throughout her future reign as Queen.

But her experience with the tiara on her wedding day did not run completely to plan.

Daena Borrowman, Marketing Manager at jewellerybox, told Express.co.uk: “The Queen Mary’s Fringe Tiara had its most dazzling moment when the current Queen, then-Princess Elizabeth, wore it on her wedding day.

“In fact, it caused major panic for the bride-to-be on her big day when it snapped as she was getting ready and had to be rushed to Garrard’s to be fixed.

Queen Mary’s Fringe Tiara first belonged to its namesake, Queen Mary, who was married to King George V, and she was the current Queen’s paternal grandmother.

As Queen Mary’s Fringe Tiara is bedecked with diamonds and precious metal, it is no surprise the dazzling tiara would fetch a seven-figure sum if ever sold.

“It is made up of diamonds set in gold and silver which have been fashioned into 47 graduated rose-set tapering bars, separated by 46 narrow spikes.

“The tiara has a mechanism that allows it to be dismantled from its frame and worn as a necklace.

“The diamonds used in this historical tiara were originally part of a necklace that Queen Victoria gifted to Queen Mary on the occasion of her wedding.”

Queen Mary was known to love jewellery, and she added many iconic tiaras and other pieces to the royal collection.

Another jewellery piece that also belonged to Queen Mary was the Queen Mary’s Bandeau Tiara, which was made for her in 1932.

The tiara was most recently worn by Meghan Markle for her 2018 wedding to Prince Harry.

Queen Mary’s Bandeau Tiara is comprised of platinum and diamonds and is formed of a flexible band of 11 sections.

Large and small brilliant diamonds make up the design, but it is its centrepiece that sets this tiara apart from all others.

The centre of the tiara can actually be worn as a detachable brooch and it is formed of 10 brilliant diamonds.

The Royal Collection Trust website explains: “This brooch was given to the then Princess Mary in 1893 by the County of Lincoln on her marriage to Prince George, Duke of York (the future King George V).

“The bandeau and the brooch were bequeathed to Her Majesty by Queen Mary in 1953.”